It’s worth checking out the new PBS documentary, Tales of Masked Men, tonight on PBS. It’s an entertaining hour that delves into the colorful, fascinating and mysterious world of lucha libre. But like any documentary that only lasts an hour, it can hardly do the subject justice. Fortunately, in this multimedia world, the filmmakers offer tons of extras on the doc’s website.

What is Tales of Masked Men about and who is it for?

Most importantly, it’s aimed at a general audience, as a part of the VOCES ON PBS, the public broadcasting station’s series on Latino arts and culture series. To that end, it scores a hurricarana, with talking heads explaining the importance of lucha in Mexican culture, and awesome footage from locations big and small. 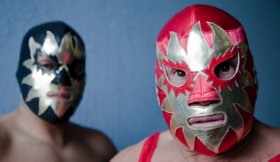 Solar (forefront) and his son, Solar Jr., are two of the names profiled in the new PBS documentary, Tales of Masked Men.

I liked the alliteration of masked, mystical, mysterious melodrama as the best description of the Mexican version of pro wrestling, which one expert explains means roughly the same as opera does to Italians.

There’s certainly lots to learn, from the early days of lucha libre and the first masked men to the action of today’s stars.

In particular, the whole father/son dynamic that exists — with lucha stars passing on names and masks to offspring — is explored, through Solar and Solar Jr., and thoughtfully includes the wife/mother as well. I was pleased with the inclusion of the mini-luchadores as well.

However, any big wrestling fan will crave more from Tales of Masked Men. The minis could have been a show in and of themselves. There’s a whole segment on El Santo, rightfully so, but nothing from El Hijo del Santo, his son who is still wrestling. The biggest void are the true international masked lucha stars, like Rey Mysterio, Sin Cara and Mil Mascaras.

I know there’s only so much you can include in one hour, but seeking to understand how some of the decisions came about, director Carlos Avila took some time to thoughtfully answer some of my queries via email.

Like the bonus features on the website www.talesofmaskedmen.com, the Q&A only adds to Tales of Masked Men, which debuts Friday, September 28th, from 10-11 p.m. ET. Check your local listings, and PVR it if it conflicts with your WWE Smackdown addiction. 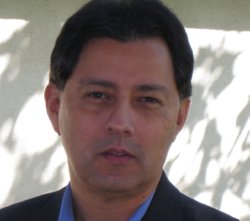 Director Carlos Avila goes behind the mask to reveal the mysterious and colorful world of lucha libre .

The film has been in my life a long time. I loved lucha libre when I was a boy. I have very vivid memories of Friday nights when my mother and stepfather would drive my brothers, sisters and me, as well as some friends of the family, across town to the Olympic Auditorium in downtown Los Angeles. The great Mexican wrestler Mil Mascaras (the “man of a thousand masks”) would regularly wrestle there and he was our favourite. The times when he would wrestle on television, was a special event. In the 1970s — and it’s often the case today — it was rare to see a Mexican man or any Latino on American television who was heroic, charismatic and victorious. Mil Mascaras had those qualities on a massive scale. Perhaps there was a larger-than-life aspect to what I was experiencing but for a ten-year-old kid, which I was at the time, it was an amazing revelation.

Because those images stayed with me for so long, as they did with many people from my generation, I thought that a documentary that explored the roots and history of lucha libre would be an important undertaking. I do feel that in some ways lucha libre has been dismissed as a “kitschy” sideshow but knowing how long it has endured it felt right to give it its due and examine its place in Mexican and Latino culture.

2. How did the selections happen on who to profile?

I was trying to balance two things in regard to the profiles, the wrestlers that were the most iconic and the wrestlers that worked thematically in regard to representing the ideas that I was trying to underscore about lucha libre. My initial impulse was to go after the highest profile wrestlers possible so I did approach Mil Mascaras, Blue Demon Jr., and Rey Mysterio Jr.. Basically, they weren’t interested. Mil Mascaras was my boyhood hero and I remember having a conversation with him in a locker room in San Diego and although he couldn’t have been nicer and more professional about it, he simply didn’t want to be involved. I’m a persistent guy and I pursued him for a few more months but it became clear that that was a dead end. I still have all the respect in the world for him but it was a disappointment.

The story of El Santo was a story that the film needed in order to give the documentary scope and scale. To show on what level a luchador (wrestler) was able to penetrate the consciousness of a nation. He was very unique and very special. I’m glad that I was able to get the cooperation of El Hijo del Santo on the film. I think once he saw a cut of the segment on his father he was very moved and he opened doors on our behalf.

I knew that I wanted to include the story of a mini-luchador. I had seen Mascarita Sagrada wrestle in Southern California and he put on a tremendous show. The connection that he had with the crowd was phenomenal. The idea of how a little person chose to become a wrestler was fascinating to me. After I met with Mascarita and heard about his journey to being a professional wrestler I knew his story had to be in the film.

Because I wanted to do a father-son story and the way that a mask gets passed on from generation to generation, people in the Southern California wrestling scene recommended that I speak with Solar. His son, Solar Jr., is at the beginning of his career. I thought it was important to capture that evolution of the next generation while it was happening. That’s what the story of Solar and Solar Jr. gave me. It gave the sense of lucha libre’s constant effort to regenerate itself and to continue. Solar’s history goes way back. He wrestled with El Santo (the father) and with Lou Thesz. He was Thesz’s tag team partner when he wrestled in Mexico. Now he’s passing all that he has learned over the years to his son and to his other students. Lucha libre keeps renewing itself. 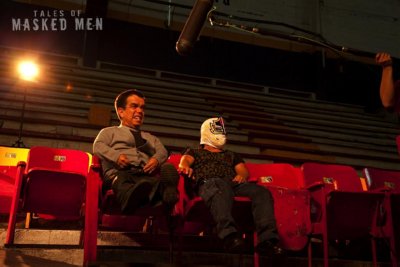 Mini-luchadors Gulliver and Mascarita Sagrada film an interview for Tales of Masked Men in Arena Neza.

3. Was it a specific decision to not run any interviews with the “gringos” wrestling in Mexico?

I really wanted to explore lucha libre, it history and it cultural resonance in Mexico and in the U.S. where there are many Mexican-Americans and other fans who follow it. I was also trying to strip away the “kitsch” aspect away from it. I thought, who better to tell the lucha libre story than Mexicans and others that were intimate and deeply knowledgeable about it and about the aspects of its cultural significance that I was trying to convey. That was the design of the interview strategy. It wasn’t a question about excluding people but more of a question of pursuing interviews with people who understood the specifics of the lucha world that I was interested in for the film.

4. Similarly, was it a specific decision not to mention or interview lucha stars who have made it big internationally, such as Mil Mascaras, Rey Mysterio and Sin Cara?

Not at all, as I mentioned, I did pursue Mil Mascaras and Rey Mysterio Jr. because I thought that I their journeys from being lucha libre stars to working and having significant careers in the U.S. was deeply important. But as I mentioned, neither wrestler (or their representatives) were interested in participating in an independent documentary about lucha libre.

Also, on a practical level, the time that I did approach WWE for materials to license for the documentary it became clear that given my modest resources for the film, going down the road of licensing extensive amounts of photos and clips from them wasn’t going to be possible. That made dealing with careers of these great luchadores who’ve crossed over into the U.S. much harder.

5. How much more footage is there and are there extras on the DVD, or future things planned?

As it goes with most documentaries, yes, there is more footage that wasn’t included in the final cut of the film. However, there was such a rush from finishing the film, to getting it ready for broadcast and its DVD release that no special bonus features could be gotten ready in time for the DVD. The one thing that I am very proud about for the DVD is that in addition to the English language broadcast version of the film, there is a full-on Spanish version of the film on the DVD. With Spanish narration and Spanish subtitles for all the English that is spoken. I really wanted to reach a Spanish speaking audience that might not watch the film on PBS through the DVD.

The film’s website (www.talesofmaskedmen.com) is where you’re going to find all the bonus features. There will be deleted scenes and photo galleries there. We will keep adding to that over the coming months.