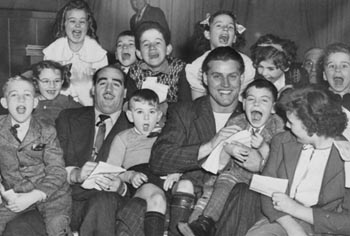 Wrestlers Pat Flanagan and Mike Sharpe whoop it up with a gang of young admirers in March 1947. 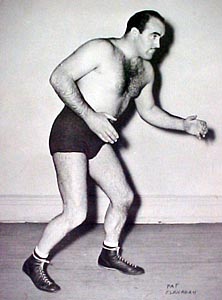 Watson got Flanagan to head to England, where The Whip also got started.

Flanagan wrestled there for years until the war intervened, and he returned home and enlisted in the Royal Canadian Air Force.

After the war, his career picked up.

‘The Fighting Irishman’ often teamed with Watson against the evil Kalmikoff Brothers.

Legend has it that he began wrestling under his real name, but upon arriving on Ireland’s shores, was informed that name wouldn’t fly with the locals. The name Pat Flanagan was taken from a neighbourhood pub.

Always a hero, Flanagan was a master of the mule kick and hit his peak in the late fifties.

After retiring from wrestling, he did some refereeing and was a commentator for wrestling shows originating from Hamilton and Kitchener, Ontario. Overall, he was in wrestling for almost 40 years.

Pat Flanagan was my uncle … He was a fighter to the end.
Lynn