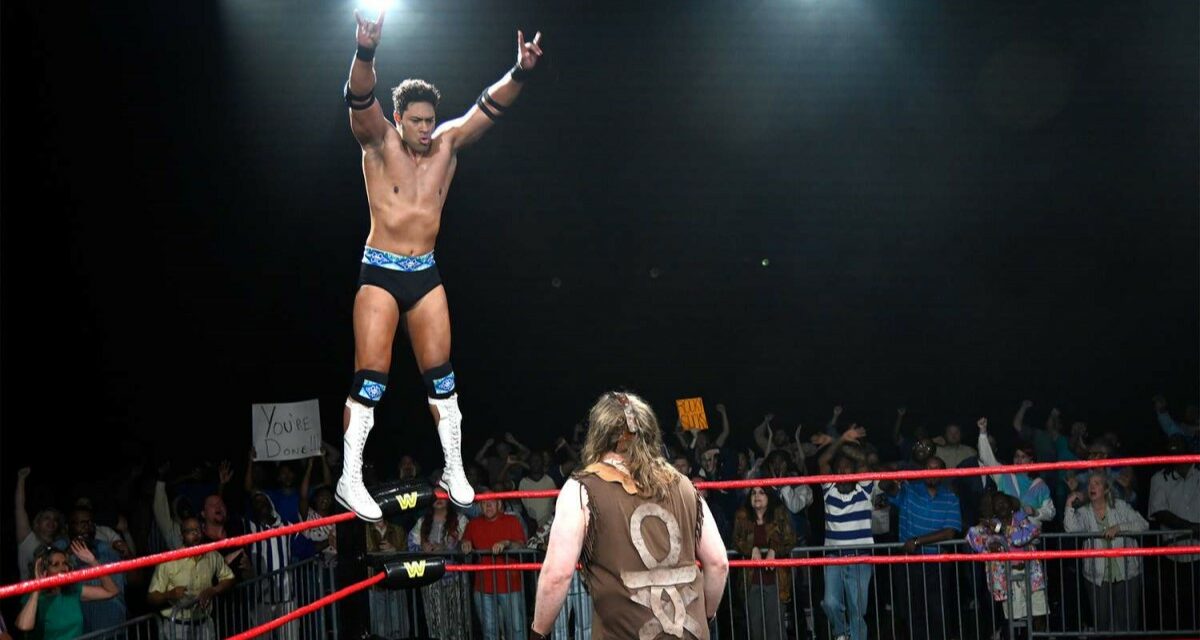 First things first: Uli Latukefu is very clear on the experience of playing Dwayne Johnson in Young Rock and dropping The People’s Elbow in season three. “It’s fun,” he insists. “It’s so much fun!”

Dropping that elbow has been a long time coming for the Australian actor, who has portrayed Johnson for two seasons as he sought his glory on the football field before that dream eluded him, bringing him to wrestling and setting him on the path to worldwide fame. However, while his younger co-stars Adrian Groulx and Bradley Constant were hobnobbing with all manner of wrestling stars from the 1970s and ’80s in the first two seasons, Latukefu’s episodes were focused on the gridiron and university, and wrestling seemed far from his world. His episodes had entertaining stories to tell, but there was the sense that the main event was still to come.

Tonight, at 8:30 PM EST on NBC (and CityTV in Canada), Latukefu’s exploration of Johnson’s “Attitude Era” years continues. “Developing into ‘The Rock’ is a big deal,” Latukefu continues. “For myself and for every other wrestling fan who’s watched him in the Nation of Domination or as far back as Rocky Maivia.” 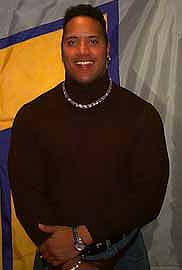 A young Rocky Maivia in Toronto in January 1997. Photo by Greg Oliver

Yet, as Latukefu and wrestling fans get to now enjoy the pay-off as the show portrays his wrestling career taking off, there was never any guarantee that the TV show would make it far enough to tell those tales. Latukefu, a veteran actor who started working in 2014, knew that the fate of his character rested in circumstances outside of his control, so he focused on what he could control within his performance.

“It is that funny thing of not knowing how much to incorporate into a performance, you know, and wanting to leave some nuggets in there,” he explains. “You know, for example, in season one, I said in the office to Ata (Stacey Lailua), ‘Know your role and shut your mouth.’ That phrase came out in season one because we just didn’t know whether there would be any progression into season two or season three. So it was definitely something that I was conscious of, but for me it was a matter of hoping for it and it’s paid off.”

For most of the actors in Young Rock, even those that have come from an athletic background, there has been a general agreement that training to get into shape is one thing, while training to get into ring shape is another. Latukefu, though, dismisses that notion in a matter-of-fact manner when asked if it was a challenge to prepare for the wrestling scenes. “No, I came ready,” he states bluntly. “Very ready. In fact, I decided to put on more weight for season two just so I could do everything and have it look the way that I imagined it to be. It means so much to so many people.”

“My body was sore by the end of (shooting), but I loved every minute of it.”

One of the unique aspects of Young Rock is that it has not only a large cast, but a cast that doesn’t always interact with one another. Leilua and Joseph Lee Anderson (as Rocky Johnson) are in three out of the four timelines as Dwayne’s parents, as is Ana Tuisila as his grandmother Lia, but everyone else tends to stick to a certain era. Most particular, of course, is the separation between Groulx, Constant, and Latukefu, who barely cross paths on location.

“We don’t really interact with each other and there are several reasons for that,” Latukefu acknowledges. “Socially, for sure, we hang out, but there’s so much to shoot on this show. While Adrian is shooting or while Bradley is shooting, I’m prepping my section to shoot. We have on some occasions dropped in to visit, but for the most part, we’re pretty much separate. A lot of that has to do with just allowing the other actors to have their space in and focus on what they need to do.”

All of this made the filming of the Christmas Special that fit in between seasons one and two a unique and fun experience for all three Young Rocks. Through a Dickensian device, all three were able to interact with one another for what has been so far the only time in the series, something that Latukefu relished. “Shooting the Christmas Special was very cool,” he recalls. “It was kind of surreal having the three versions of us together, but a lot of times I really do see these other guys as my brothers.” 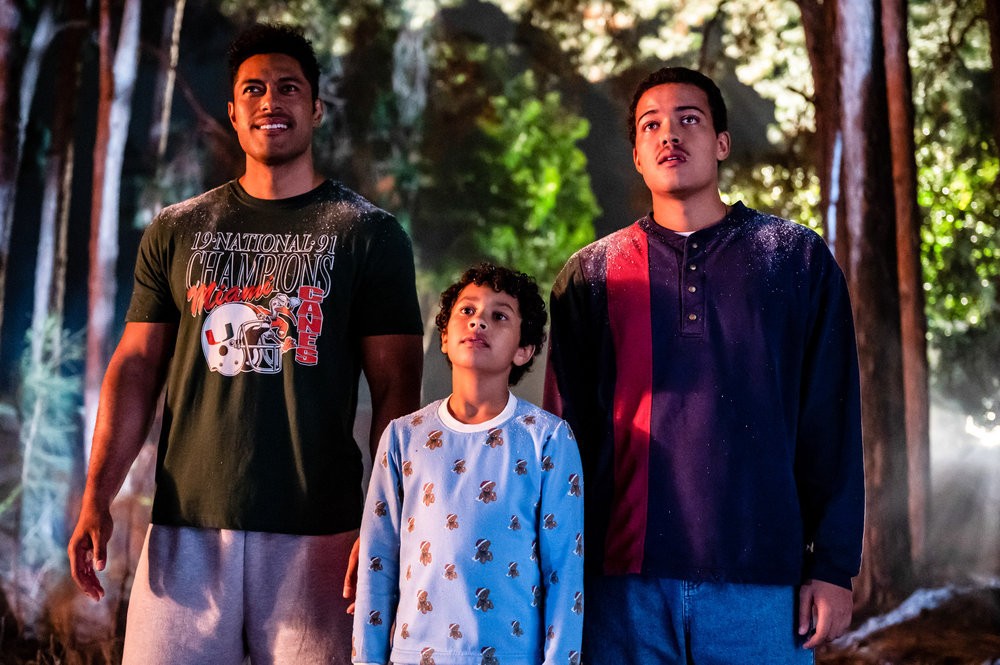 Latukefu, Groulx, and Constant come together in a still from Young Rock‘s Christmas Special.

This is not the first time that someone from the Young Rock team has used a familial description for the cast and crew, and Latukefu recognizes something about this production that he thinks reflects the real life Johnson’s focus on teamwork and his own family. So, does Latukefu feel like something of an older brother to his younger selves? “You know what, I did but I try not to,” he admits. “Because, for me personally speaking, if you adopt that kind of role they lose their their own independence and their own autonomy. Maybe that’s just my relationship with my own brother, you know, because growing up I was incredibly protective.”

“But, you know, you can’t help it with these guys. We hang out a lot and sometimes they’re asking for advice on certain things that I’m fortunate to be able to offer.”

A rather noticeable difference in season three, mind you, is that the youngest Rock is suddenly not that young anymore, which Latukefu remembers watching happen in front of everyone’s eyes. “We met up before shooting and Adrian had obviously grown,” he chuckles. “And then a few weeks into shooting, we did a table read and Adrian’s voice had just broken overnight.”

Playing Groulx off as a little younger than he really is won’t be a problem for the series, though, as Latukefu explains. “In the show, it’s a funny thing because Stacey is only a few years older than me and playing my mother, and Joseph is younger than me playing my dad.”

Outside of Young Rock and in a strange twist of fate, Latukefu found himself auditioning blindly for a role in a DC project with no idea that he was trying out to join Dwayne Johnson’s Black Adam project. “I got an audition, I want to say in the last week we were shooting season one, and I didn’t get any word about what it was except it was that it was a DC movie,” he explains. “And hand on my heart, I don’t know why I didn’t connect (it to Johnson), though I knew Dwayne was filming something for DC. I didn’t hear back and I was just enjoying wrapping season one, and then I got a text from Dwayne asking if I could give him a call. I actually had pulled up to the emergency department at the hospital because I had burst a blood vessel in my eye, and I was debating whether or not to go but I took the call and yeah, it allowed me to play the role of The Champion. It was a really special moment for me on set. He was shooting the most important part of the movie, and I happen to be a part of it. I’m forever grateful for him and for the opportunity to be a part of that franchise, and then it was back to shooting season two.”

With a role in 2023’s Next Goal Wins, a football (see: soccer) comedy directed by Taika Waititi and starring Elizabeth Moss, Michael Fassbender, and Will Arnett, and another hand in a TV min-series called Last King of the Cross starring Tim Roth for Paramount+, Latukefu is aiming to make the most of his opportunities while they’re in front of him.

One of those possibilities, which he stresses are merely at discussion levels right now, also involve the world of professional wrestling. “I was fortunate enough to get to Raw and I was so inspired,” he enthuses. “I really love this sport, I really love it. It’s the theatrics, it’s the physicality, it’s the storytelling, it’s the characters — all of it combined. I had a few conversations with people at WWE and yeah, it could be something down the line. It’s something that I’d be interested in doing, but the thing for me is that it has to make sense for wrestling fans. As well as just, you know, my selfish interest in doing it!”

Right now, though, Latukefu is enjoying watching Young Rock along with the audience and dreaming of dropping more elbows. “I’m just focusing on giving the best People’s Elbow and cutting the best promos as The Rock as I can,” he says with a laugh before repeating his enthusiasm and how much he’s enjoying this experience. “It’s so much fun. Everyone’s having such a good time.”

Check out our SlamWrestling.net Young Rock interview and review archive below for more tales from the cast and crew of the show, and say tuned for more to come!

Top Image: Latukefu is set to soar as Maivia in a still from Young Rock: Photo courtesy of NBC.