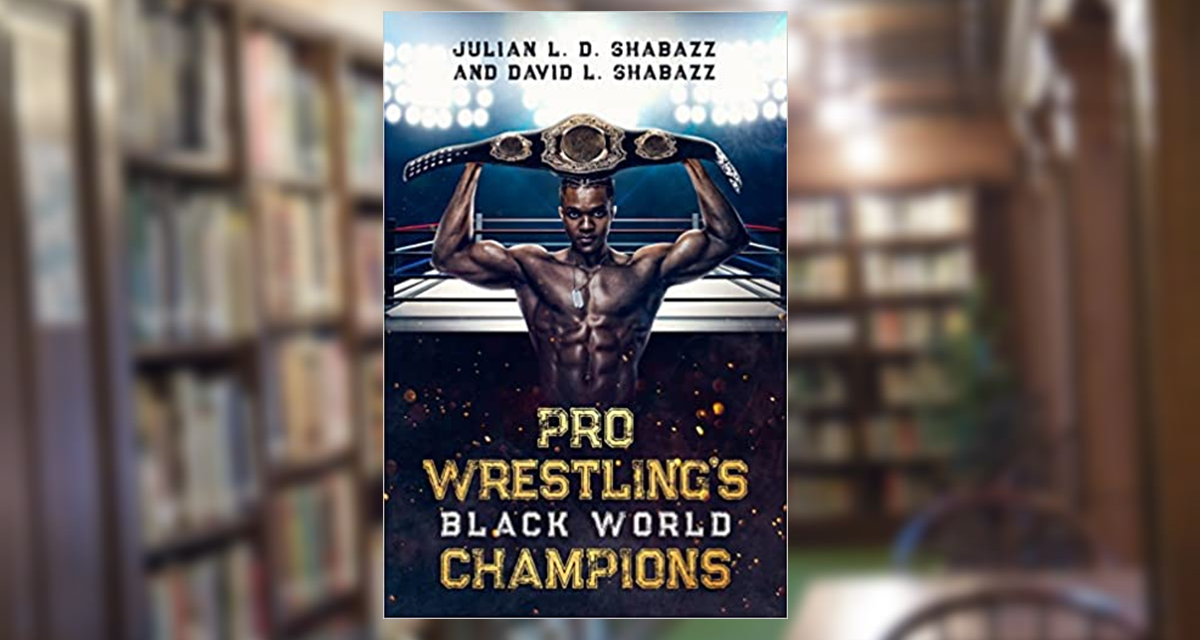 Personally speaking, when my maternal grandfather died, I found he had tons of peppermints in the pockets of his pants and jackets to combat his urges to smoke cigarettes. I also found this giant, red lamp with rose carvings all over it. It has a place of honor in my library. My husband thinks it is ugly and gaudy, but I treasure it.

But for David L. Shabazz, when his brother died, he found an opportunity to further his brother’s legacy.

David is the brother of Julian L. D. Shabazz, who died on June 14, 2020, at the age of 52. Wrestling book fans may recognize Julian as the author of Black Stars of Professional Wrestling. Originally published in 1999, the encyclopedia-like primer contained short profiles on many of the African Americans who have stepped into the squared circle going back to the 19th century. The book went on to a third edition printing in 2019. 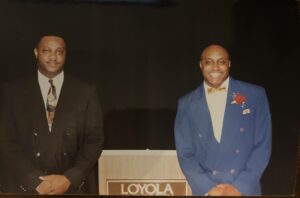 While going through his brother’s possessions, David found a PDF file that Julian had created called, Pro Wrestling’s Black World Champions. The document was inspired by an article Julian had written for Kayfabe Magazine, entitled “Pro Wrestling’s Black World Champs: A Short History.” Julian had been inspired to expand and revise his original article. When David found the document, he felt he could update the file and “give a little more meat” to it so that it could be released in book form. The book, published by Awesome Records and co-authored by the brothers, was released on July 22, 2022.

“I was going through some of his (Julian’s) things and some people had mentioned that somebody should pick up the torch and carry (the document) through,” recalled 52-year-old David, who currently resides in Frankfort, Kentucky, in a phone interview with SlamWrestling.net. “I was like, ‘Well wrestling is not really my thing. It was Julian’s thing. Although I love the sport and watching it like him, it wasn’t really something that I wanted to go into in terms of writing about it.’ It was really more of a passion project to further his legacy.”

David explained he stayed true to the format of the book that Julian had created. The book features an Introduction by Julian followed by the sections: Forerunners, Champions From Major Federations, Special Mentions: Champions with an Asterisk and a Conclusion. The Forerunners section has brief profiles on Bearcat Wright and Bobo Brazil, whom Julian wanted to pay homage to as trailblazers for the African American pro wrestlers who would follow them. The second section of Champions From Major Federations includes profiles on Ron Simmons, Jacqueline Moore, The Rock, Nyla Rose, Booker T, Kofi Kingston, Big E and others. The final section of Special Mentions: Champions with an Asterisk highlights African Americans who weren’t properly recognized for their title wins. For example, Sailor Art Thomas defeated Baron von Raschke on February 4, 1972, for the World Wrestling Alliance’s (WWA) world title. Alas, the title was based in Indianapolis, so this victory was not officially recognized by the WWA. 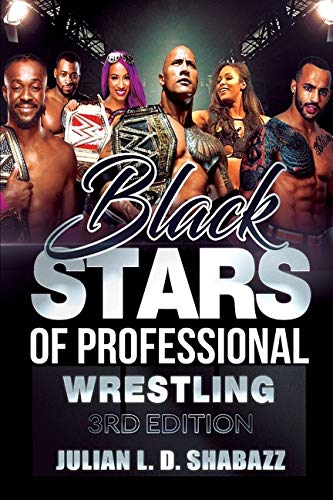 David says he wanted to contribute some additional substance to the book especially for those readers who may not know the history behind the major pro wrestling organizations. So, David added a Preface which gives readers a taste, or maybe more aptly described as a snack, of pro wrestling history including ancient African wrestling (a section this reader found really intriguing and wanted to read more about), modern wrestling in the United States and the emergence of independent promotions.

David says the book took him about a year to complete. When looking at that timeline, one must take into account that along with being an author, David is also the Acting Dean at the College of Humanities, Business and Society and the Associate Professor of Journalism at the Kentucky State University.

The resulting book is a quick read at 83 pages in length. And while not completely comprehensive, it must be noted that the book is definitely heartfelt and a means to whet the appetite of readers on this subject. This reader viewed it as an encouraging, starting point, and possibly even a first exposure, for readers to either conduct their own further research or who knows, maybe even write their own books.

As a fan of women pro wrestlers, I have to admit my disappointment that profiles for Naomi, Sasha Banks and Bianca Belair are missing from the Champions From Major Federations section. To be fair, the fact that Belair and Banks were the first African American women to headline at WrestleMania is mentioned in the book’s Conclusion. (The two were the main event for night one of WrestleMania 37). Naomi and Banks becoming the first African American women’s tag team champions in World Wrestling Entertainment (WWE) is also noted in the Conclusion. David told this reader he did “leave the door open” when it comes to releasing another edition of this book.

David admits that the release of this book has been therapeutic, bittersweet and a way to cope with his brother’s death.

“It was really, really, really personal for me,” reflected David. “I guess, it was sort of a, gosh I can’t think of the word… healing process. But you know, the part of the healing for me, I would say was to try and put this book out and to try and do something else for him. I guess it is almost like a gift for him when I found it.”

Although he admits, Julian was the bigger pro wrestling fan, David has fond memories of the two watching wrestling together. Wrestling was something, David explained, was always on in their house. Even their maternal grandmother was a fan. But when the Junkyard Dog (Sylvester Ritter) died in 1998, David says that Julian was really hurt that he couldn’t find much information after one of his favorite wrestlers died.

“I think he was looking up information on him (Ritter) and he didn’t see anything,” David recalled. “There was like no news. And I think that bothered him and he said, ‘There’s nothing out there! These legends that we grew up watching, and there’s no news about them!’”

The incident would fuel Julian’s passion to write Black Stars of Professional Wrestling. He would also write other African American themed books.

“He (Julian) basically lived for the culture,” David pointed out. “He was really trying to uplift the Black people. That was really what he wanted to do. And even when he was on interviews (for the Black Stars of Professional Wrestling book), everybody would talk about racism and those kinds of things. And he would say, ‘Well that’s not my focus. This is a book that’s just trying to praise those wrestlers of African descent period. Yes, racism exists, but that wasn’t the focus of my book.’” 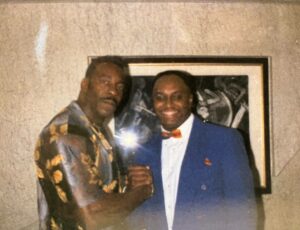 Readers may be surprised to learn that Pro Wrestling’s Black World Champions is not the first book that the brothers wrote together. In 1996, the two released Dolemite – The Story of Rudy Ray Moore: The World’s Greatest X-rated Comedian. (For the film buffs in the audience, actor Eddie Murphy portrayed Moore in the 2019 film, Dolemite is my Name and earned a Golden Globe nomination for his performance.) It’s more than evident that the brothers were extremely close. David and Julian also formed a rap group called The Awesome Crew in the early ’80s.

When asked to describe his brother, David paused and then shared, “He was a free-spirited person, who just genuinely was the nicest person you ever wanted to meet. Of course, he had his idiosyncrasies like everybody else. But he enjoyed helping people. He was a servant of the people at heart. He studied recreation (at the time of his death Julian was in the dissertation phase for his doctorate in sports management) and he always used to stress to his students that this is a service industry. And he was also a librarian. As a librarian he operated the bookmobile (literally a library on wheels). And I think he enjoyed that. He was the person who went around to the elderly and to the young people who could not get to the library.”

David hopes that through the book more people will discover Julian’s work, the legacy of his brother’s contribution to professional wrestling history will be recognized and furthered and of course be enlightened on the African American pro wrestlers who attained championship status against innumerable odds including racism, stereotypical booking, and fictitious titles just to name a few. In the book’s Preface David even wistfully projects that, “Perhaps one day, Black world champions will become so commonplace until a book like this is no longer necessary.”

“I want them (the readers) to get an appreciation for the few Black world champions that there are,” concluded David. “And I tried to mention their signature moves and phrases to just kind of get a feel of who they are and their contributions. I want the readers to have that level of appreciation for them. And I think that can further the opportunity for many more to come along.”