The process of change requires the undeterred efforts of many. In the world of professional wrestling Babs Wingo, Ethel Johnson, Marva Scott, Ramona Isbell and many others served as catalysts for a huge change in the business: being the first African American female wrestlers. Without them, there would be no Naomi, Alicia Fox, Ember Moon or Nia Jax, to name just a few. Chris Bournea, a journalist, author and filmmaker based in Columbus, Ohio, seeks to finally tell their long untold stories, with his documentary Lady Wrestler: The Amazing, Untold Story of African-American Women in the Ring. 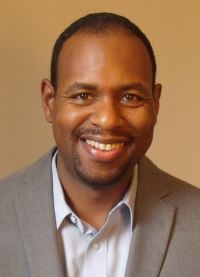 “The analogy I draw is that if you are trying to open a jar, sometimes you need somebody to loosen up the lid a little bit and that’s what I feel like they (the first African American female wrestlers) did,” remarked the 45-year-old Bournea in a phone interview with Slam Wrestling. “They came in, they loosened up the lid so women today in wrestling and other sports can just blow the lid off the jar.”

Working as a newspaper journalist, Bournea first got the idea for this documentary when he consulted his friend, Terry Anderson, a local public relations specialist, for story ideas as Bournea was working the entertainment beat. Anderson mentioned that his childhood friend was the daughter of wrestler, Ethel Johnson. Bournea set up an interview and was fascinated by her tales of wrestling alongside her real-life sisters, Babs Wingo and Marva Scott. Her stories took an unexpected turn, one that Bournea felt was “just too grand to be limited to one newspaper article.”

“She talked about the contrasts of how when she was in other countries a lot of the time wrestlers were treated like royalty basically,” observed Bournea. “But when she would wrestle in the Deep South, this was back in the ’50s and ’60s, she would be subjected to segregation just like other African-Americans. She’d have to go in the back door of restaurants and drink from coloured water fountains and stay in segregated hotels.” 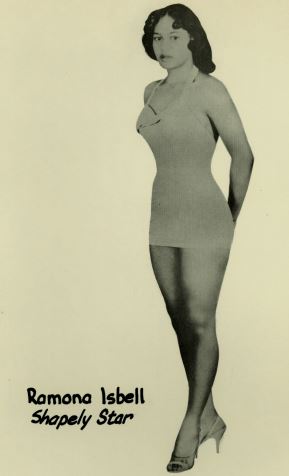 Even though there has been a lot of coverage on females breaking into the “old boys’ club” of professional wrestling, Bournea saw that the story and challenges faced by the first female wrestlers who were African-American was unique and had not properly been told. And it wasn’t just excluded from the history books of professional wrestling, but of his local history as well.

“Why as an African-American who was born and raised in Columbus, didn’t I know about her (Ethel Johnson) or any of the other women who were also black female wrestlers?” pointed out Bournea as he discussed that his own hometown was “this unlikely center for women’s wrestling.” Infamous women’s wrestling promoter Billy Wolfe had based his operations in Columbus. And unlike many other wrestling promoters at that time, Wolfe included African-American women on his roster.

“One of the biggest things I learned about researching Billy Wolfe is that allies often come in unlikely forms,” offered Bournea. “To look at Billy Wolfe’s history and some of the things he did on the outside, he seems kind of sexist and kind of underhanded in the way he did business. But for whatever reason he was progressive when it came to racial issues. So I definitely see him as a complex figure. I feel like in some ways he empowered women, but in other ways he exploited women. I don’t feel like you can reduce him to one single oh he was a hero or he was a villain.”

Bournea worked on the documentary on and off for 10 years as he also has a day job as a Public Information Officer with the Ohio Department of Job and Family Services and worked on other projects. The documentary would end up expanding from focusing on the sisters to also include Ramona Isbell after her daughter, Joan, contacted Bournea to let him know her mother’s last name was spelled wrong in his article on Johnson. The spell check ended up leading to an interview with Isbell herself.

Isbell, who is 78 years old and also resides in Columbus, is quite humble about the reaction to the documentary. Now an ordained minister, Isbell, says many in her church community were surprised to hear about her 22-year career in the ring. And her family keeps reiterating the historical significance of the documentary.

“We were just telling what happened to us really,” Isbell stated matter of factly during a phone interview. “I don’t usually talk much about it. But it’s out in the wash now!” 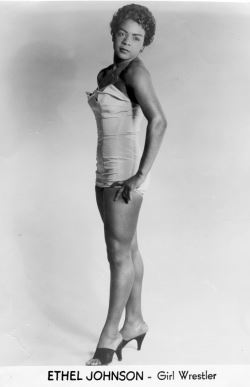 As is the case with most independent productions, Bournea looked to his friends and contacts to complete the film. He was fortunate to acquire the services of his friend and film editor, Paul Hill. Upon viewing one of the cuts of the documentary, Hill advised Bournea that there was a voice missing from the documentary. There needed to be an outside commentator to give additional perspective. As luck would have it, Bournea was discussing his project with another friend, journalist Wil Haygood, who just happened to work at The Washington Post, alongside fellow journalist, Jeff Leen, who wrote the definitive biography of Mildred Burke: The Queen of the Ring: Sex, Muscles, Diamonds and the Making of an American Legend.

Not only did Leen provide a wealth of wrestling knowledge, but he also unintentionally ended up with the distinction of being in the most difficult section of the documentary to film.

Explained Bournea with a laugh: “He (Leen) had this very narrow window of time where he was about to go on vacation to somewhere far away and he was going to be gone for like a month. We wanted to get his interview done before he was gone for a long period of time. So we had just a few hours and he had to work that day. It was like a Friday and that ended up being the best day for him to do the interview. He said he could sneak away from the newsroom for a few hours. He didn’t want to do the interview in the newsroom at The Washington Post because he said he didn’t want to give the impression that The Washington Post was endorsing the documentary. So I had to reserve this room at a hotel. The conference room that I reserved ended up being right next door to the kitchen. So in the original sound, you can hear plates clanking and forks and knives clanking and I had to keep asking Jeff to speak up over all these kitchen sounds that are next door. Luckily, Paul Hill, the editor I worked with was able to put all those kitchen noises on a separate track.”

Despite a stressful situation, adding an outside voice to the documentary, was indeed a wise suggestion as Leen provides essential context of this “golden age” of women’s wrestling. In addition to interviews with Johnson, Isbell, retired wrestler Ethel Brown, and the children of Johnson, Isbell and Scott, (Wingo and Scott both died in 2003) Bournea interviewed Hasan Jeffries, a professor of African-American Studies at Ohio State University.

While this is a documentary about professional wrestling, the heart of it lies in the segments discussing the racism the women had to endure. It is here that Jeffries expertly educates and often shocks viewers with the realities of this time in history. 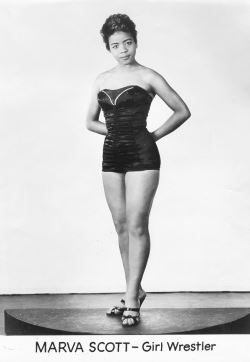 “African-American athletes who break the colour line literally had to be better,” explained Jeffries in the documentary. “Because if they were the same, if they weren’t bringing anything else or worse or less than, then there was no need to deal with the fire storm and the social headache that having their presence on these various teams in these various professional sports would have created.”

In addition, and unlike their white counterparts, Jeffries points out that female African-American wrestlers had to be wary of every white person, not just those involved in the Ku Klux Klan.

The subject of racism is obviously a painful one for the women to reflect on. The women reveal they were often subjected to racial slurs from the audience and threatened with physical violence during wrestling bouts in the U.S. and internationally. Wingo ended up getting stabbed by a fan with broken glass in Mexico. Scott suffered a nervous breakdown while wrestling in Japan. Johnson saw African-American attendees being turned away from wrestling shows even when there were fellow African-American wrestlers on the card. Isbell was told by a salesperson not to touch merchandise and that they really didn’t want to serve her while shopping in Australia.
“It was a situation where you know it was depressing a lot,” said Johnson, who would often laugh and smile in the documentary, but turned somber while discussing the racism she endured. “And I actually lots of time through the years after I look back at it, I hate to think about it.”

With all the obstacles and pain, one can’t help but wonder why the women didn’t just hang up their boots immediately. For Bournea, the answer is simple, the women would have had to deal with the same issues inside and outside the squared circle. 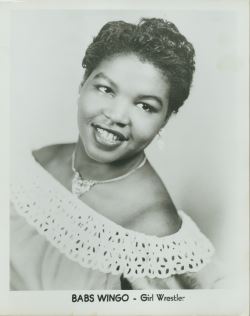 “So why not do something that you enjoy and you’re good at when you’re going to have to face the segregation anyway?” Bournea concluded. “It’s not like if they weren’t wrestlers they wouldn’t have to deal with this type of segregation. Even in Columbus, there’s still the black side of town. There’s areas that are more white. Even to this day, there’s still segregation. I think they just thought this is something that I’m doing to number one make a living and number two it’s something that I enjoy so I’m just going to endure this bad side of it.”

The documentary also features interviews with the late Rowdy Roddy Piper and Kenneth Clark, a Detroit wrestling fan. While it is always great to hear the voice of Piper again, his and Clark’s contributions to the discussion pale in comparison to those of the women, Leen, and Jeffries.

The resulting 82-minute-film is still an essential and compelling contribution, not to mention one that’s often forgotten or not widely known, to the history of women’s wrestling.

“I think the main takeaway that I’d like people to get from the documentary is that we’re in such a polarized climate right now in the country (USA),” reflected Bournea. “And these women really showed that allies come in all different forms. And people of different races and backgrounds, like Billy Wolfe and these black women, as much as a cliché as it sounds like, people of different races and backgrounds can often come together and work together toward a common goal.” 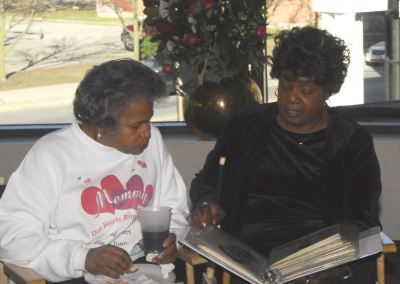 Ramona Isbell and Ethel Johnson in 2007. Photo by Willie Jennings.

The film has been screened in select locations with plans to release it on a streaming service in the future. Bournea is intrigued by the idea of doing a follow-up book or documentary about African-American male wrestlers, but there are no definite plans at this time. Currently he is in pre-production of a fictional film that isn’t wrestling related.