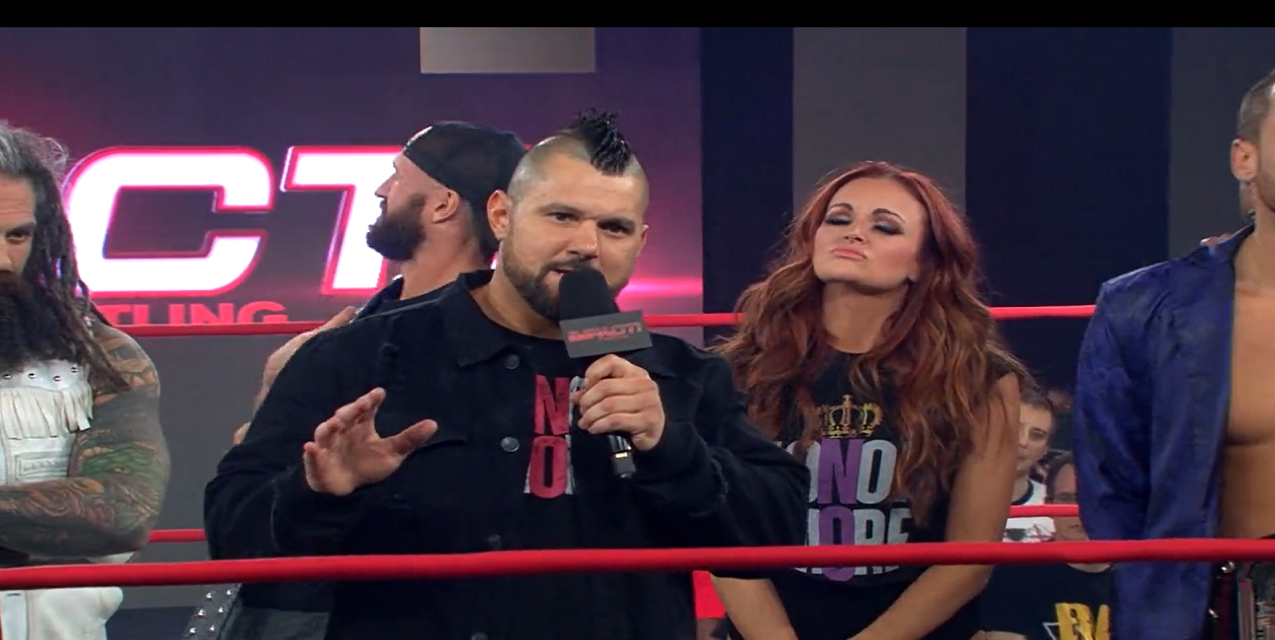 Greetings and salutations all! I am back and this time i am bringing you the Impact Wrestling report. With Victory Road in the rearview mirror and Bound For Glory just a week away we are in the critical path to build up stories and feuds for Impact’s biggest show of the year.

As a side note, For AEW’s show in Toronto. If you are in the Toronto area or even if you are not going to the show be sure to Join myself and the rest of the Sunday Nights Main Event crew along with The Handshaking Team, and Dark Side of the Elite at The Rhino bar at 1249 Queen St West from 1-6PM for a celebration of wrestling which will include prizes, special guest appearances, and so much more!

Without further ado, lets get to this week’s Impact Wrestling

The match was relatively even to start but after sometime Kid landed a suicide dive on Austin on the outside of the ring. This was followed up with a double team springboard powerbomb to Bey that was absolutely beautiful to watch. The match continued with such a fast pace that it was hard to take proper notes but it was the type of match that you would expect from the four.

After a very 50/50 match and a few hot tags by the face team Austin shoved Kid off the top rope. Miguel was left alone to fend off against all of Bullet Club. Austin grabbed Miguel and tossed him into Bey’s direction to land a Art of Finesse. Austin came back into the picture to deliver an Austin’s fold to Miguel and went for the pin. That was all she wrote for Miguel as he couldn’t come back after taking both men’s finishers.

Gia Miller is with Bhupinder Gujjar. She asked him about last week’s ladder match loss to Brian Myers. Gujjar said that he had a broken nose but that won’t stop him from competing. He then announced that he is entered in the Call Your Shot Gauntlet Match at Bound For Glory next Friday October 7.

Miller is then with Frankie Kazarian and they talked about him winning the triple threat revolver match. He said that he is totally focused on the X-Division championship match at Bound For Glory against the champion, Mike Bailey. He said that he is super confident of his chances to win the title next week

If you wanna play ball, Frankie, let's do it. Get your skates on, grab that racket and get on the field. Nothin' but net. 🏆 https://t.co/qoICZ6xuIf

Myers controlled the early part of the match but Steve gained some momentum halfway through the match. This didn’t last long as Myers poked Steve in the eye as the ref wasn’t paying attention. Myers hit the Roster Cut for the win.

After the match he grabbed the mic and said that he was looking for more competition. He said he wanted to fight someone with blue checkmarks (Meaning verified or more Celebrity Twitter Users). Myers then issued an open challenge for his Digital Media Championship at Bound for Glory.

Johnny Swinger and Ziggy Dice were backstage. They were talking about Swinger’s palace. They were confronted by some woman. John E Bravo then showed up. Some more nonsense happened. They made a joke about no one watching Wrestle House 2. FINALLY AND THANKFULLY Taya Valkyrie walked by with Jessika and were as disgusted as the rest of us at what is going on. Dice found a roll of money and said he needed to get it back to Hernandez

Author’s Note: This might be the worst thing I’ve seen in professional wrestling. I…just…wow…..JUST WOW.

The only casino other than @Stake that I’m still allowed in. #outlandish https://t.co/OflnCZtosC

A Joe Hendry vignette aired with more Canadian actors. He was the sole beneficiary of his father’s estate.

Rosemary and Father James Mitchell were caught via security camera. She was asking Mitchell about advice for her issues with Havok and Jessika as she wants Havok around and not Jessika. Taya Valkyrie and Jessika are still walking around backstage and end up in this scene. They told Rosemary to stop trying to get Havok back as they like Jessika. They then ask Rosemary if she is in or out with them. Rosemary is in and they all rejoice.

The show kicked off with a nice little match. While nothing special, it was fine and entertaining for an opener. Delirious rushed Taurus to start the match  but Taurus constantly overpowered him. Taurus controlled much of the match with his raw strength and power and there wasn’t much Delirious could do to counter this.

After sometime, Delirious hit Taurus with a clothesline and he followed this up with a sequence of leg drops to try and hurt Taurus. Unfortunately, this was not enough as Taurus went to regroup as he rolled out the ring onto the outside. This quick break was enough for Taurus as he came back into the ring and delivered a vicious backbreaker and followed that with a Samoan Drop. Taurus then hit Destination Hellhole (inverted sit-out-over-the-shoulder piledriver) for the win.

Bobby Fish was backstage being interviewed. He was asked why he joined Impact and he answered that Impact has the competition and legitimacy he has been looking for. Fish then called out the competitors of the Bound For Glory main event as he said that he wants to challenge the winner of Josh Alexander vs Eddie Edwards.

Mia Yim is interviewed about her match with Mickie James during her title or retirement tour. Yim talked about her past with James and said that she lost then because she wasn’t as prepared as she is now (They played clips of James pinning and beating Yim).

.@MiaYim and @MickieJames go WAY BACK! And there's footage but OFCORSE @GiseleShaw08 just HAD to steal the spotlight again! #IMPACTonAXSTV pic.twitter.com/fXs9SBRFNY

Honor No More make their way to the ring. They celebrate Eddie’s pin over Alexander. Edwards eventually called out PCO and was upset that he lost his match last Friday. PCO was noticeably angry but was calmed after they put a bag over his head (sure?).

Edwards took back the mic and said that the fans turned their backs on him so he’s here to prove them wrong. He said that at Bound For Glory he would pin Josh Alexander once more to become champion.

This was when Impact World Champion Josh Alexander came out and said that Honor No More was afraid and touted the importance of the title.

Edwards quickly interrupted Alexander and said that he was blind (Alexander) and that he would open his (Alexander’s) eyes at Bound For Glory and what angers him the most about Alexander is that he fights for the very same fans that turned their backs on him. Edwards challenged Alexander to fight all of Honor No More. Alexander, for some strange reason 8 days before a title defense agreed. A fight breaks out and Heath and Swann came to backup Alexander. Then the Motor City Machine Guns came to even the odds. Everyone cleared the ring leaving the Bound For Glory main event of Alexander and Edwards alone in the ring. The two would eventually start fighting as Edwards avoids a ling fight by rolling out of the ring to end the segment.

This match started already in progress after a commercial break. PCO was in control because of his monster like strength. Vincent came into the match and this gave Heath the window he needed to take control of the match for his team. PCO saved Vincent a few times and overloaded and just fell to the floor.

With PCO out, Swann focused all of this offense on Vincent. Swann eventually hit Vincent with a high kick and Phoenix Splash to end the match.

Later on, Sami Callihan wanted to be in the Maclin/Moose match but can’t because of a broken Orbital bone but was made a special guest referee instead

This match started off as a regualr match with both women lookign for regular offense. Punches quickly turned to hitting each other with weapons as the match went on. Masha landed a suplex to Katch which she quickly followed that up with a chain-assisted choke. This was eventually broken up and the women brawled back and forth some more. Katch hit Masha with a trash can lid. Eventually Masha hit Katch with an Air Raid Crash in the corner of the ring to give her a firm grasp in the match.

Back from the break, both women were bleeding. Masha took a chair and entered the ring but Katch used a chain to punch Masha. This did not even phase Masha as she was able to escape a fireman’s carry with a DDT to Katch. Masha then landed a suplex onto a chair which hurt Katch. Masha continued to dominate the match and Katch couldn’t find a break.

Masha then delivered a DDV onto a chair that looked absolutely devastating. Katch somehow kicked out of the pin. Masha climbed to the top rope but Katch caught her with another trash can lid and delivered a suplex. Katch then hit a DDV through a door porpped on the corner which phased Masha but it wasn’t enough to put her away for the win.

Both women then fought on the ring apron and Masha hit a Russian Leg Sweep through a table on the outside of the ring. The women eventually made it back into the ring and Katch now has some momentum in the match as she hot Masha with a running knee and followed this up with a piledriver onto some tacks. Masha kicked out again. Katch then adds more tacks to the ring. Katch grabbed another trash can and hit Masha but Masha came back quickly from this and hit a Snowplow to Katch onto the tacks in the ring for the pin and three count for the win.

.@mashaslamovich WINS MONSTERS BALL! Could we be looking at our NEW Knockouts World Champion come #BoundForGlory?!

Tickets to #BoundForGlory in Albany, NY on October 7th are ON-SALE NOW!

Next Week on Impact TV:

We are 8 days away from Bound for Glory and while this episode of Impact did a good job of promoting the main event and a few undercard matches, it seemed that we should be more hyped for next week’s biggest show of the year. The women’s Monster’s Ball match was tons of fun but that match couldn’t save some baffling backstage promos including one of the worst things I have seen in 30 plus years of watching wrestling