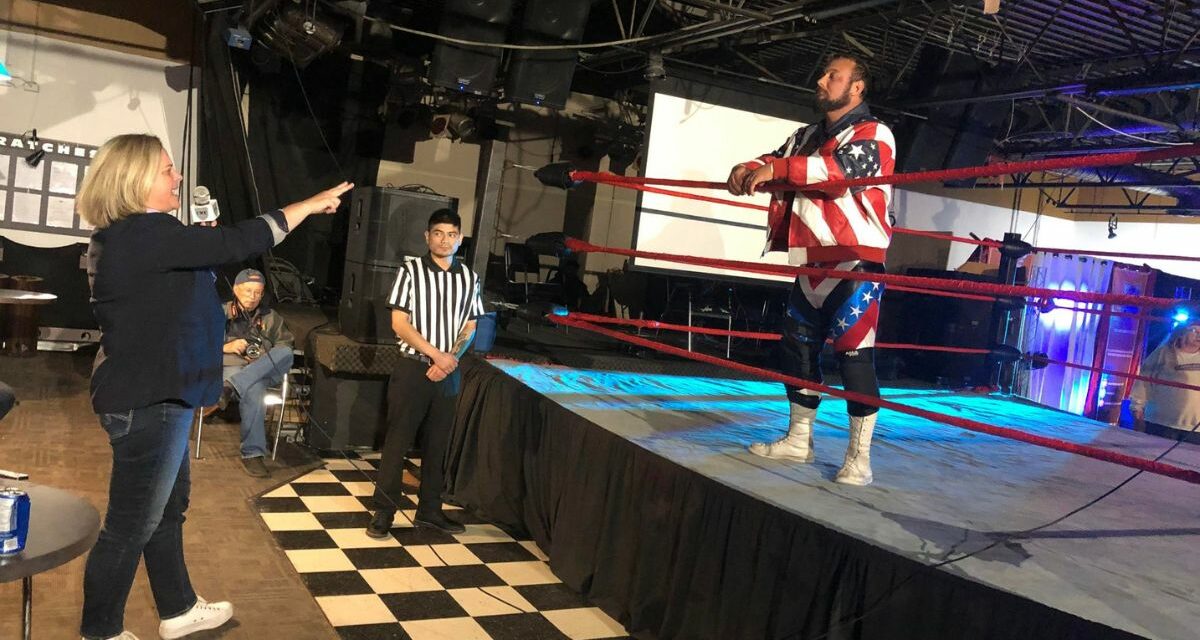 Winnipeg Mayoral candidate Jenny Motkaluk, who finished second in the 2018 civic election, said to voters they could count on her to restore local professional wrestling cards to Winnipeg community centers.

At a press conference on Wednesday, she announced a campaign promise to providing operational funding for the four major annual parades. She also expressed her support for all kinds of family-friendly festivals and events, such as car shows. Then, she told the media, she was a pro wrestling fan going back to the glory days of the AWA:

Speaking of community centers, they are being underutilized and we will find new ways to bring families and fun activities into them. When I was a kid I saw Hulk Hogan and Jesse the Body Ventura and Mean Gene Okerlund in person at the Winnipeg Arena and the matches I watched were shown around on AWA All Star Wrestling on TV. Right after the AWA left our city pro wrestling grew into a multi billion dollar industry.

Since then, two of the biggest and most famous names in professional wrestling for the last 20 years are Chris Jericho and Kenny Omega. Chris is from St. James and Kenny is from Transcona, (the suburb where the press conference was held). Today they are the biggest stars in All Elite Wrestling, AEW on TV and on pay per view. You know here they started and learned their trade? Community centers.

She continued, “But today the City does not allow it in community centers – well, when I’m Mayor we will. There are thousands and thousands of wrestling fans in Winnipeg. More events renting out our community centers brings more positive economic activity to the community, and that’s important.” 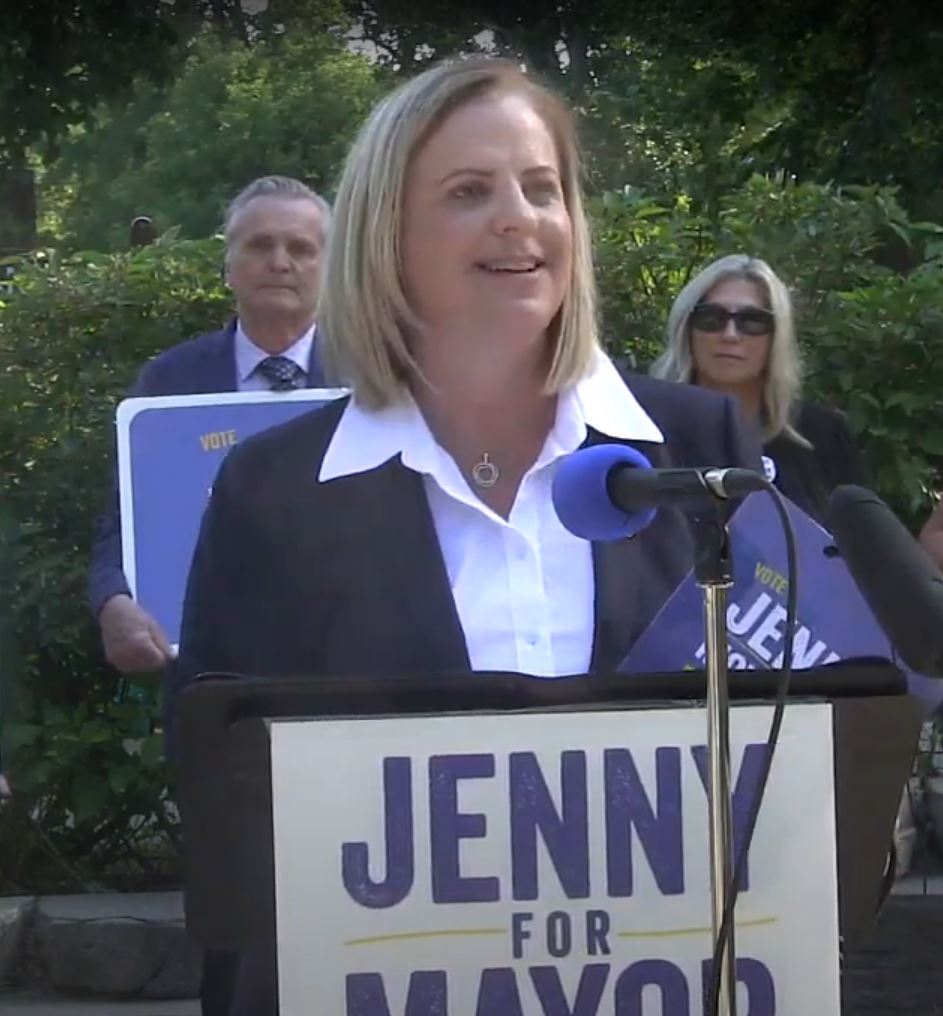 About ten years ago the City of Winnipeg Risk management division implemented a requirement that events could only get a permit if the wrestlers themselves had insurance in case they injured their opponent or were themselves hurt.

Canadian Wrestling’s Elite (CWE) holds events all over the province and across the country, and had never heard of such a requirement for ‘performer’s insurance.’ As owner Danny Warren (flagship star Hotshot Danny Duggan ) learned, that was because it doesn’t exist and the insurance industry had never heard of it. Still the city left the roadblock in place and told the promotion “(our) problem was with the insurance industry, not the City.”

Consequently, civic building such as community centers, are off limits to CWE and other promotions even though the family-friendly venues formed an important building block in the development of area talent since the 1970s and New Brand Wrestling, which began the careers of wrestlers like Brian Jewel, Mike Stone, Rick Patterson and others.

“We can bring a lot of economic activity to the neighborhood community centers and it is important for the newer guys to learn how to wrestle in front of kids and families and not just in bar environments,” Duggan told SLAM! Wrestling.

He added that “the City is asking for a specific policy of insurance not required in over 60 markets across 5 provinces that we operate in. It’s like some bureaucrat at Winnipeg City Hall decided that because they hate wrestling, no one is allowed to enjoy it in a city-owned building.” 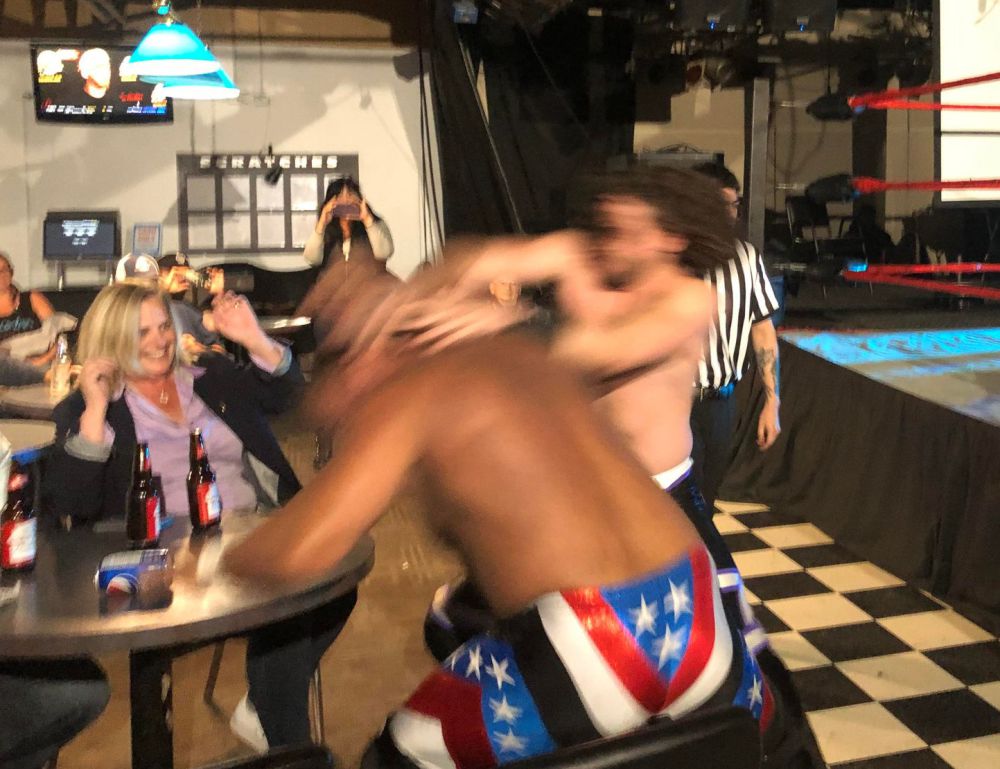 Motkaluk attended a CWE card last Friday, September 23, at a packed Rookies Sports Bar, a block away from her campaign office in Transcona, and was hooked again on the in-person excitement of the sport. She was the subject of an anti-politician, anti-Canada tirade from the ring by Duggan, who has adopted a pro-USA persona; meanwhile Motkaluk made the first big splash of the campaign when she criticized the decision of The Forks — the main public gathering place in Winnipeg’s downtown — to cancel Canada Day celebrations this year.

After he derided women candidates and generated a pronounced level of crowd heat, Motkaluk was given the mic and proclaimed, “I am a proud Canadian, and when I’m Mayor of Winnipeg, this city’s going to celebrate Canada Day every July the first — and you’re not invited buddy!”

Duggan’s scheduled opponent, Josh ‘Cheeks’ Holliday, ran out to head off Duggan as he confronted the candidate, and they started the match with a hot brawl around ringside as Motkaluk cheered.
Watch the confrontation between Danny ‘USA’ Duggan and Winnipeg candidate for Mayor, Jenny ‘Canada Day’ Motkaluk, here:

On Wednesday, Motkaluk laid out her plan to make Winnipeg a more fun place, stating that her motivation to include pro wrestling was “so the thousands of wrestling fans in Winnipeg can enjoy the fun and excitement — and see the stars of tomorrow — right in their own neighborhood.”

“Because my plan for Winnipeg will institute High Performance Government Services, the Permit Department and all other civic desks will meet standards of good quality public services that support our lifestyles — such as public celebrations and parades. And City Hall will treat these applications with respect, fairness, and speed. We will support family entertainment of all types, including cruise night and wrestling and who knows? Maybe even the Zombie Walk can make a comeback.”

The Winnipeg civic election is on October 26.

Motkaluk has announced she will attend the next CWE card in Winnipeg on Friday October 7, at the Holy Eucharist Parish Centre (460 Munroe Ave). The card, part of the Point To Prove Tour, will feature IMPACT! Wrestling alumnus Hernandez, a title defence by CWE Champion Mentallo, and the retirement match of Beautiful Bobby Jay, who has accepted the challenge of Duggan to square off one last time.