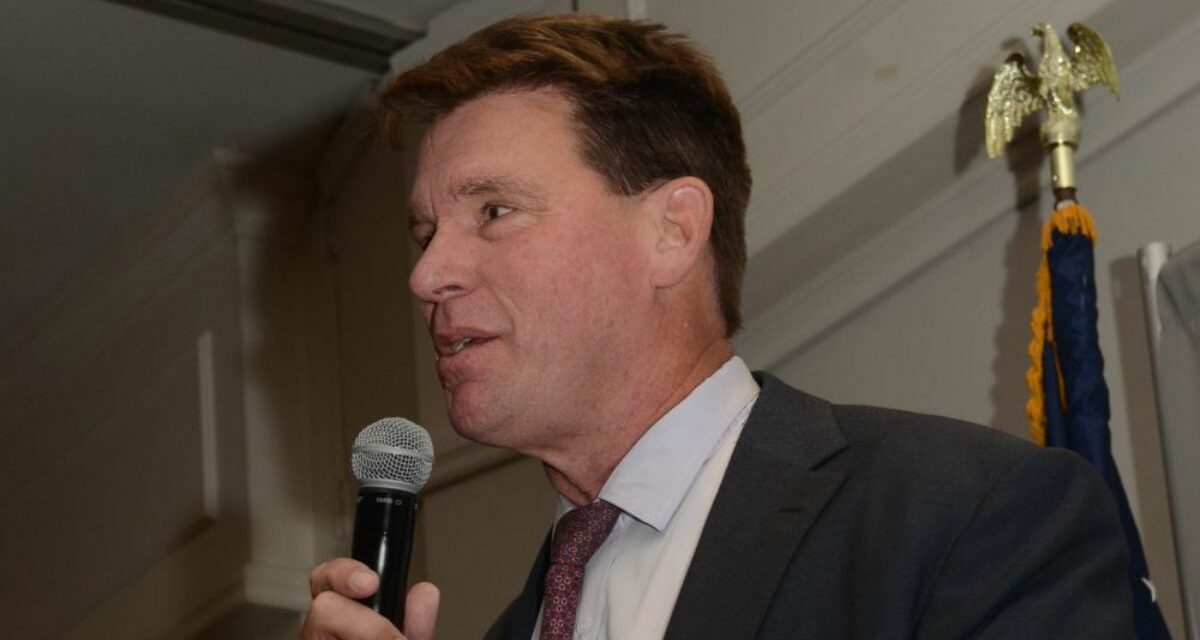 The 56th annual reunion of the Cauliflower Alley Club was touched by a wrestling god. But while John Layfield used that self-description to rile up WWE fans, it turns out he is a lot humbler than your average deity.

Watching wrestling as a kid in Texas, Layfield promised his grandfather that he wouldn’t be a rulebreaker if he made it as a wrestler. It was a vow broken, but one that grandpa would likely have overlooked, given the list of acclaims and titles that his grandson piled up, including a 280-day reign with the WWE championship.

It wouldn’t have been possible, Layfield said, without the support of others. Riding down the Texas roads with the likes of Skandor Akbar, Killer Tim Brooks and referee James Beard, Layfield said he received a Harvard-level education in wrestling.

And though his on-screen character was a millionaire who had nothing but contempt for the hoi polloi, Layfield had heartfelt praise for Eddie Guerrero, who conceived of an angle in which his foe caused Guerrero’s mom to suffer a feigned heart attack.

A 2020 WWE Hall of Fame inductee, Layfield still dabbles in the wrestling game with a podcast and a slightly disguised appearance on behalf of Baron Corbin during recent WWE programming.

“I had a dream when I was a kid and the reality far exceeded anything that I told my grandfather that I was going to do,” he said.

Texas referee James Beard brought Layfield to the stage. He was a big part of Layfield’s early career 30 years ago in the Lone Star State, when he wrestled as John Hawk after simply looking for a job opportunity in the Global Wrestling Federation.

“He learned to the point that he became trusted enough not to kill people in the ring, but to be trusted by the largest wrestling federation in the world to carry their championship,” Beard said.

Although a scaled-down version was held in 2021, this was the first, full, post-pandemic CAC get-together. Turnout was strong, with nearly 400 registered for the event at the Plaza Hotel and Casino in Las Vegas, with many fans, wrestlers, and assorted hangers-on seeing friends for the first time in more than three years. 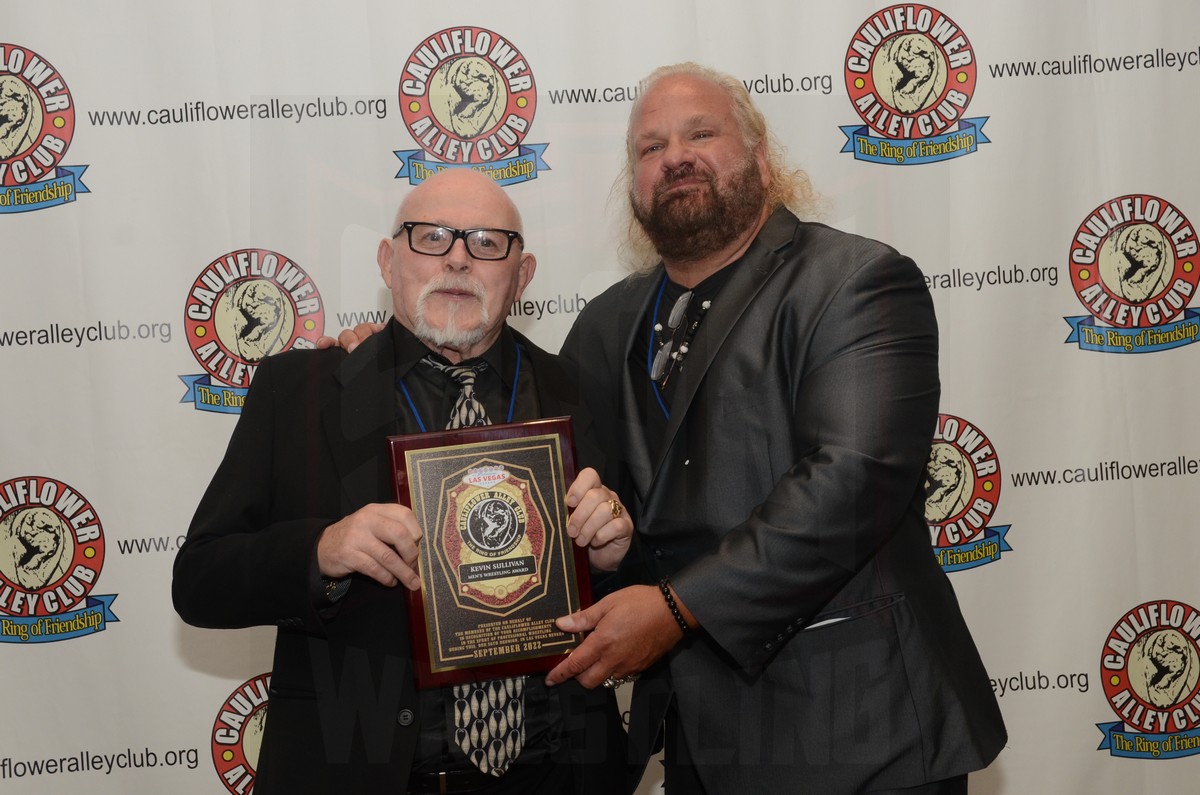 Awards were front and center at the annual banquet, which serves as a gala conclusion to the three-day reunion. Veteran grappler Andrew Anderson presented “the great, the talented, the not-so-evil” Kevin Sullivan with the men’s wrestling award. “Kevin builds people up and never lets them down,” Anderson said.

Starting off as a babyface in the 1970s in the World Wide Wrestling Federation, Sullivan became one of the most imaginative and imaginative heels in the industry as the leader of the Dungeon of Doom, the Varsity Club and other troupes.

True to Anderson’s description, Sullivan heaped praise on opponents who he said made him look better, from Blackjack Mulligan and Andre the Giant to Mike Graham. He particularly credited Konnan (Charles Ashenoff), saying he elevated ethnic wrestling to a level “that is still felt today.” 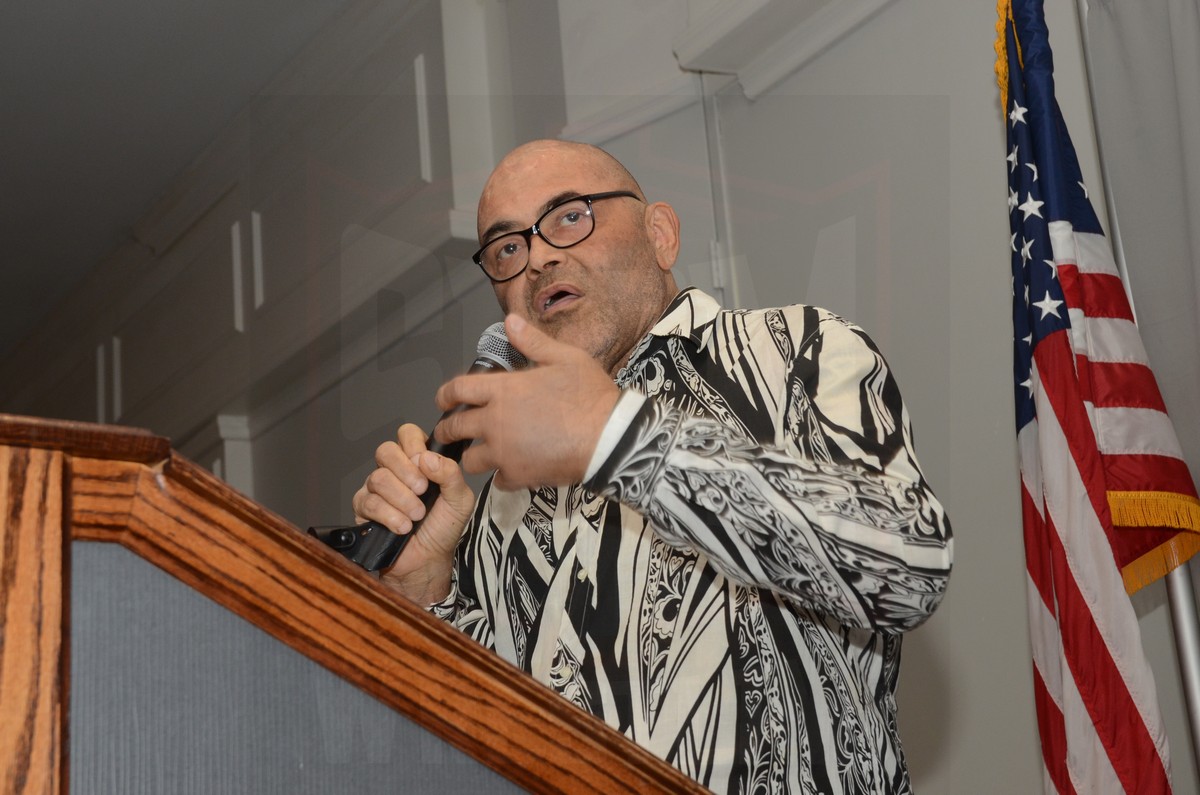 Konnan at the 2022 Cauliflower Alley Club awards banquet on Wednesday, September 28, 2022, at the Plaza Hotel & Casino in Las Vegas. Photo by Brad McFarlin

Sullivan’s comment was timely because Konnan took home the Lucha Libre Award, and complimented Sullivan in return. The 2021 winner, Rey Mysterio, introduced Konnan, recalling the groundbreaker trained under the tutelage of Mysterio’s uncle.

“We bonded from the very first day as brothers. I’ve always seen him as a big brother,” said Mysterio, adding that Konnan recruited him to the ring full-time from a job at a pizza joint. “I truly believe that if it wasn’t for you, I would have been a part-time wrestler making pizzas.”

Konnan said he was mesmerized by the camaraderie at his first CAC reunion. He expressed pride in his role in growing lucha libre beyond a once primarily Mexico base to a phenomenon that has placed luchadores in England, Japan and Australia.

“I literally cannot walk [in Mexico] without people reminding me what I meant to them,” he said.

Konnan also said he is proud of the way the wrestling business is more embracing of minorities, women, LGBTQ individuals and others once were treated as gimmicks. He urged the business to be accommodating and cleanse itself of toxicity that undermines its reputation. 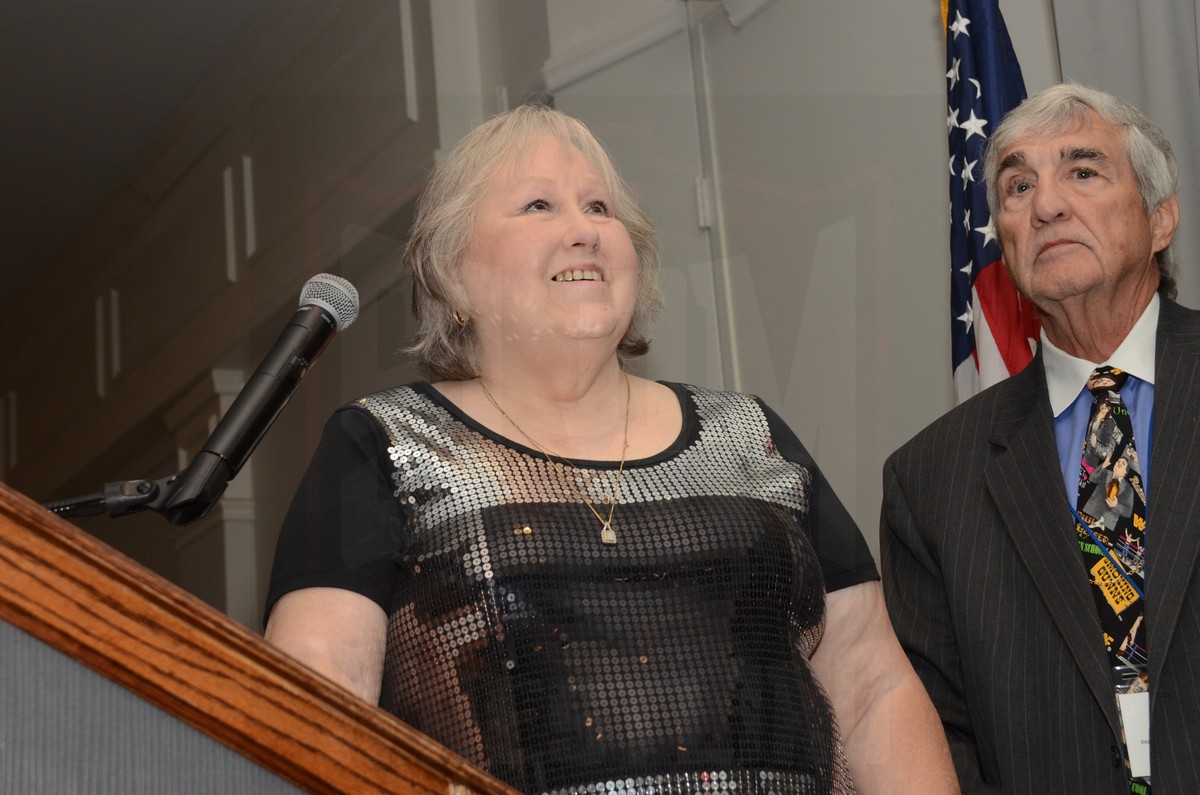 Joyce Grable, who received a Courage Award, watches a video of herself with EVP Rich Ingling at the 2022 Cauliflower Alley Club awards banquet on Wednesday, September 28, 2022, at the Plaza Hotel & Casino in Las Vegas. Photo by Brad McFarlin

The 2022 Courage Award went to Joyce Grable, part of many top-tier tag teams with Wendi Richter, Leilani Kai and Judy Martin. Grable wrestled from 1971 into the early 1990s, when she stepped aside due to injury.

Her in-ring success was just the first chapter of the Grable story, however. She was diagnosed with leukemia not long after wrestling with legends in Florida. A battery of tests also revealed heart defects; Grable said one doctor said she should have dropped dead 20 years ago. Now, with pig valves in he heart, she is raring to go as she approaches her 70th birthday. “God’s been good to me,” she said in her soft Southern drawl. “I’m still here.” 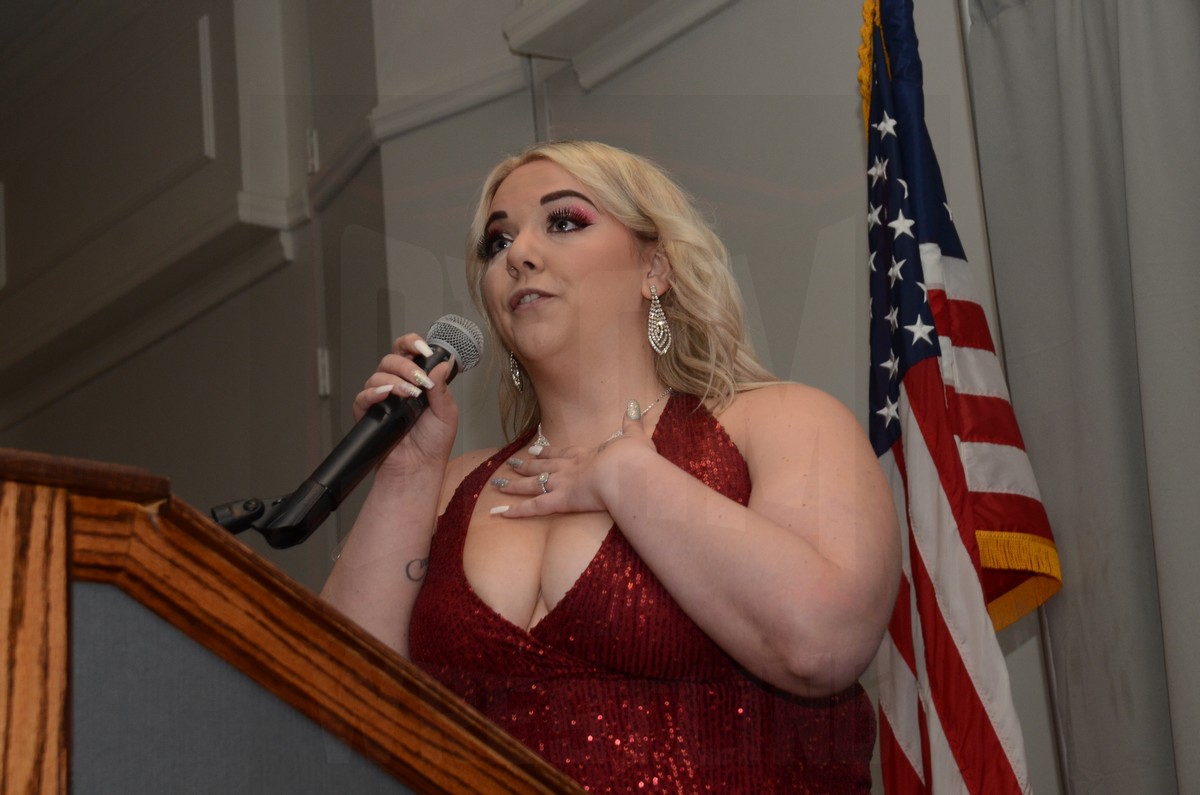 Twenty-two-year-old Maddison Miles received the club’s Rising Star award. Presenting Miles, former Canadian promoter David Boyce praised the versatility of the young grappler, who has wrestled in 10 countries for 67 promotions since breaking in six years ago. “Maddison has the ability t be the most beloved wrestler or the most hated hell on the roster,” he said.

“All I want for my future is to be able to give back what I have been given,” Miles said, noting she was the first Canadian to receive a job placement credit through wrestling to facilitate her high school degree. “Anything I have done in pro wrestling, I have done for the love of the business and I hope someday that will pay off for me.” 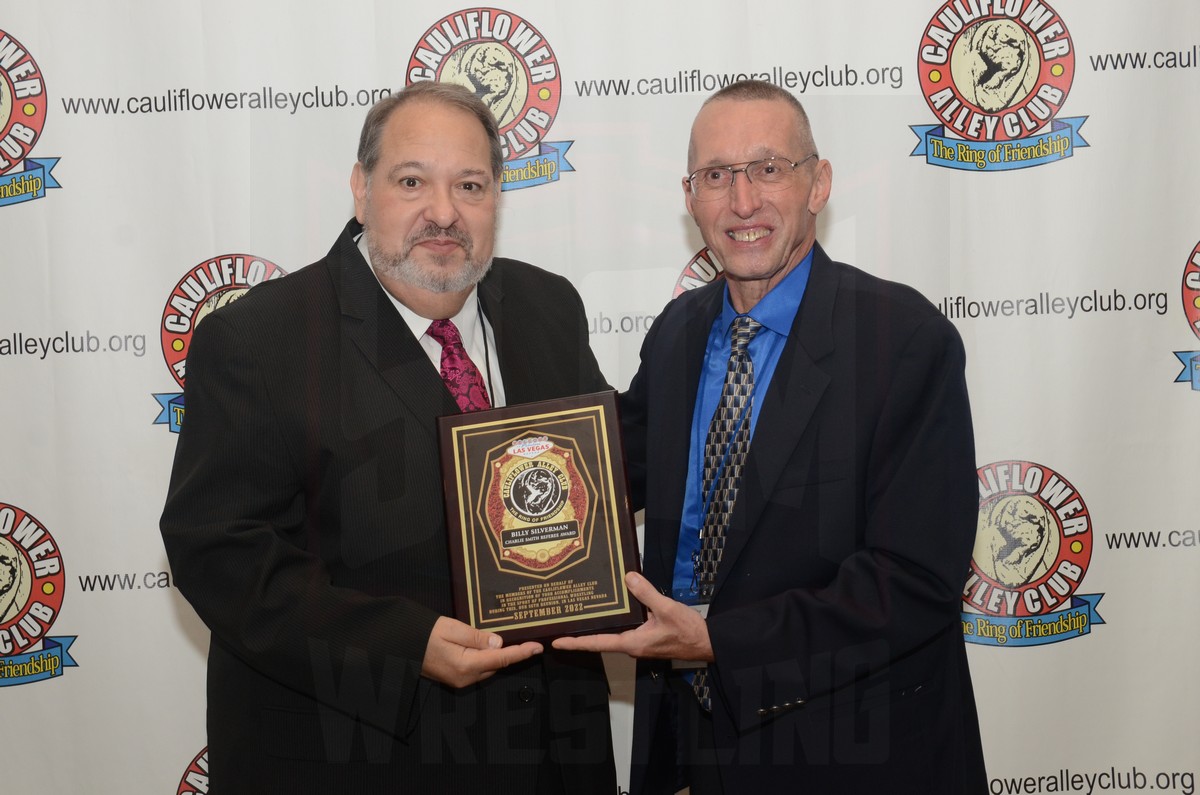 Billy Silverman captured the Referee Award, named in honor of Charlie Smith, a longtime CAC stalwart and Georgia referee, who died in May. New England promoter Sheldon Goldberg praised Silverman’s work ethic and said Smith would approve of the selection of a first-class, enthusiastic arbiter.

Silverman was a regular in New England and also referred major events for years in World Championship Wrestling. “I had great opportunities to work with incredible wrestles,” he said. “I’m just overwhelmed with humility and gratitude.”

In addition, Smith’s wife Louise thanked the CAC for helping out during his illness. “I would have been lost without CAC when Charlie was ill.” Simmons accompanied Louise to the dais and said he designed the event T-shirt in honor of his friend of 50 years.

Recognized with a special award was 92-year-old David Cantu, who wrestled and refereed primarily in the Southwest. The oldest active CAC member, Cantu wrestled under many guises and also boxed in his younger days.

It was a banner day in other ways for the CAC. For the first time, Las Vegas honored the club by declaring Sept. 28 to be Cauliflower Alley Club Day in the city. Councilman Stavros Anthony presented CAC President Brian Blair with the proclamation, signed by Las Vegas Mayor Carolyn Goodman, in recognition of the more than $250,000 that the nonprofit organization has raised to support wrestlers in need.