The accolades are common when recounting the life of ‘Sailor’ Art Thomas, who died Thursday in Madison, Wisconsin of cancer: incredible physique and very well thought of by both fans and fellow wrestlers.

Rene Goulet was one of those wrestlers who worked against Thomas in the ring and traveled with him on the road. “He was a very nice man always happy and polite,” said Goulet. “He was probably one of the first big guy with a Mr. America physique.” 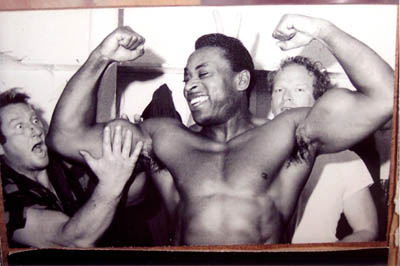 Former world champ Gene Kiniski remembered Thomas for his “fantastic physique” but only worked against him once in Memphis.

“The huge chiseled giant was a sight to behold with his large hands, muscular chest, and 21-inch bulging biceps,” wrote Julian L.D. Shabazz in Black Stars of Professional Wrestling. Hulk Hogan has mentioned that Thomas’s built was an inspiration for his own workouts.

Arthur Thomas was a massive man, six-foot-six, and 265 pounds. Besides working as ‘Sailor’ Thomas, he was also known as ‘Seaman’ Art Thomas, Hercules, and ‘The Body’ and strength moves like the bearhug were his calling card. He worked many different territories, but was best known around the Chicago area. He worked many places across Canada as well, and was a regular in Grand Prix Wrestling in Montreal in the early ’70s. Thomas was generally a fan favourite during his career. He worked into the early ’80s, well past his prime. Thomas was believed to be 79 at the time of his death.

In February 2001, the late, great Lou Thesz shared his memory of Sailor during a chat with SLAM! Wrestling. “He was before his time, a bodybuilder, weight lifter. At that time, the best black wrestler,” said Thesz. “Art Thomas worked in a packing house or something in Wisconsin and was very well thought of in the wrestling game. A good guy, great great body.”

Goulet and Kiniski both admitted that Thomas was not a master in the ring. “He was not the best worker but he got over wherever he worked,” said Goulet. “[He was] always well dressed– shirt and tie and suit — even if we traveled 500 miles in a car trip. God bless his soul.”

On various newsboards, fans had colorful ways to remember one of the early black stars of pro wrestling. “Like Samson fighting off the Philistines, Thomas threw them off, halfway across the ring. I had never seen one man handle two like that and I was immensely impressed!” wrote one fan. “Awesome specimen. … He would usually chat with people in the lobby. Always a class act,” wrote another.

A memorial service and funeral are expected next week.