Minority Mat Report: The rocky road of African-Americans in wrestling 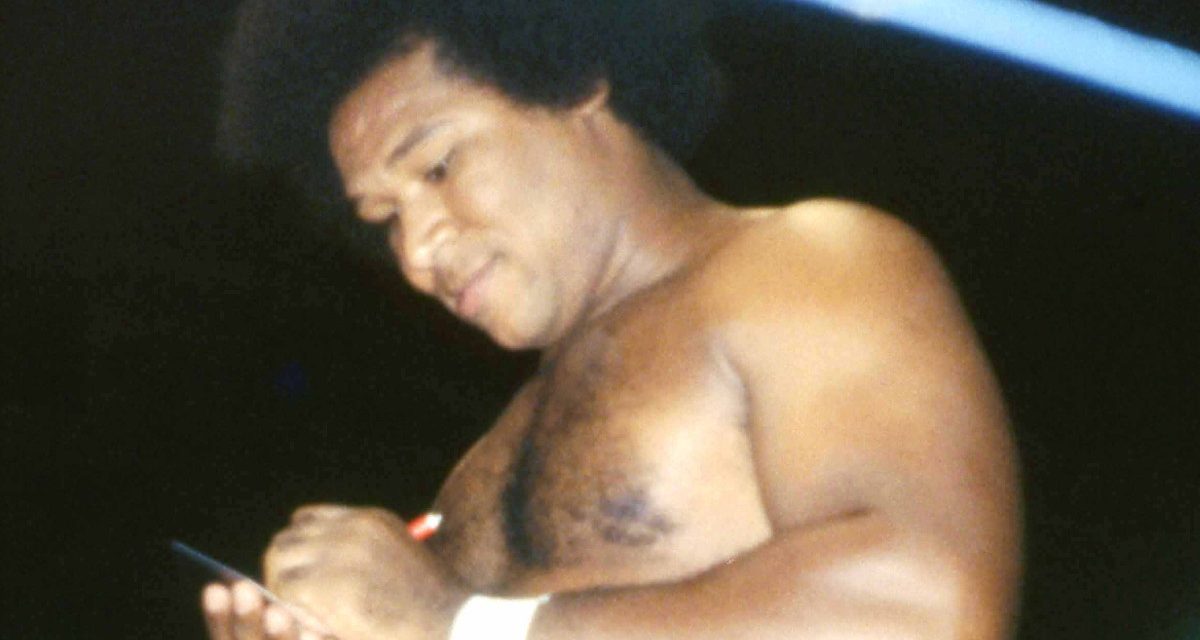 Black History month is here, and just like Eli Whitney, Harriett Tubman and Martin Luther King Jr. are recognized for their contributions, African-American professional wrestlers should also be recognized for breaking the color barrier in the wrestling business. But it wasn’t easy.

Tiger Conway Jr. always turned the other cheek when it came to racism. He grew up in a small town near Houston, and remembers being discriminated against as early as childhood.

“They used to have parades back in Houston, and all the white people got to stand in the front row,” Conway said. “In the next row were the Hispanics and the blacks were always in the back. Some of us used to try and sneak up to the front to get a better view, but people would see us and some of the security pushed us back. There was one policeman who was a white man and was friends with my dad. He used to let us stand there, until other people saw us.” 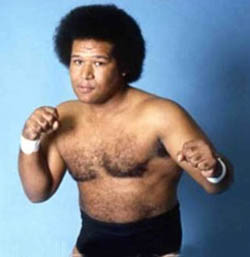 Of course, Conway’s father, Tiger Conway Sr., was a wrestler as well, and coming from a small town where everybody knew each other, he may have been treated a little better than some of the other African-Americans in that community, because of his dad’s celebrity status.

“My father came from Louisiana and moved to Houston. His mother and father were slaves. They used to work on a plantation and pick cotton,” Conway said. “We had some of the wrestlers come over to our house and a lot of them were white. All my dad’s bosses were white. But some of the people in town used to throw rocks and tomatoes at some of my friends.”

It didn’t get any easier for Conway once he got in the wrestling business. Racism was not as big an issue for him, as it was for some of his African-American friends. But even as a witness, it was very traumatic.

“Some of the boys back then used to play games with color. I didn’t really appreciate it, but we never really talked about it back then,” Conway said. “Some of the people in the business were very racial. I would always see what was going on. I never stuck my nose in other people’s business, but I always stepped up when I needed to.”

Adversity is never an easy thing to overcome, especially for minorities. Racial prejudice was more common in the 1970s, when there wasn’t a lot of diversity in wrestling, at least in the southern territories. Rocky Johnson, who was a big star in the latter part of that decade, can personally attest to that. 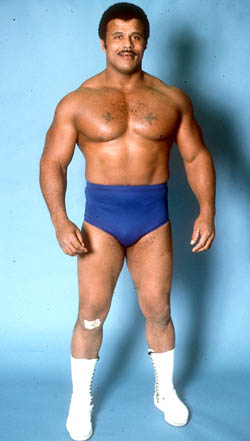 “You’re going to run into discrimination behind your back. When I got down there (Southern states) it shocked me. But I wasn’t going to take it,” said Johnson, who was born in Nova Scotia, and raised in Toronto. “I never let it happen. They tried it in the south (Tennessee), but I stopped it. I would tell them, ‘My name is Rocky, not boy.'”

Johnson was able to overcome that adversity, and was the first black champion in Memphis, Florida and Texas.

“I had to prove myself in the south, because they never took blacks down there seriously,” Johnson said. “I never tried to be as good as the next guy. I tried to be better.”

Johnson sees a significant change in the business today as opposed to then. There is a lot more diversity, but longevity in wrestling is not the same as it used to be, because of the increased rate of injury.

“It’s changed today 100 per cent. But they’re (today’s wrestlers) not going to get 35 years out of the business like I did,” Johnson said.

Of course, there is always a first time for everything, and it was Viro Small, a former slave from Beaufort, South Carolina, who became the first known African-American professional wrestler in North America in 1874. The first big star was Jim Mitchell, who was known to wrestling fans as the Black Panther, and had people talking in the 1930s; another from that era was Reginald Siki.

With TV came a host of new names, including Sweet Daddy Siki, Woody Strode, Luther Lindsay, Tiger Conway, Thunderbolt Patterson, and Bearcat Wright. It was Bobo Brazil, however, who stood above the rest, headlining just about everywhere he worked.

Wright was the first African-American to hold a version of the World title in 1963, in his case the California-based WWA title. On a national basis, Ron Simmons took the WCW World title in 1992.

On the management side, there was James Dudley, who was the first African-American to run a major United States arena. He managed Turner’s Arena in Washington, D.C., was Vincent J. McMahon’s personal driver, and was inducted into the WWE Hall of Fame in 1994. Sonny King was a decent 1970s star who transitioned into a ringside manager as well. 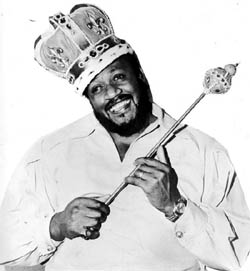 By the time the late ’90s came around, being African-American wasn’t much of an issue, whether female (Jazz, Jackie Moore) or male (The Rock, Shelton Benjamin, Bobby Lashley, Mark Henry).

There are also those wrestlers who don’t believe they have ever had discrimination work against them. Abdullah the Butcher for instance, has dealt with his fair share of racism. But he never let it get in the way of a great career that he had going for him. He was a huge draw because of the intensity of his character and his ability in the ring, which had nothing to do with ethnicity.

“You have racism in every sport. I can’t say that I didn’t deal with racism,” Abdullah said. “But when you’re a top man, everybody respects you.”

Koko B. Ware, who was a rising star during that era as well, never identified himself as a black wrestler, but just a wrestler. And he never thought that being black was a hindrance on his career. If anything, it just made him stand out more.

“Hey I was born black and I’m going to die black, so why would anyone be subconscious or have a problem with that?” Koko said. “When I was the birdman, I was flying higher than the 747.”

James Harris was also blessed with a unique gimmick. Of course, Harris is known to fans as Kamala, and while some may consider the gimmick a stereotype, Harris was very open-minded about it and never saw it as anything more than entertainment. 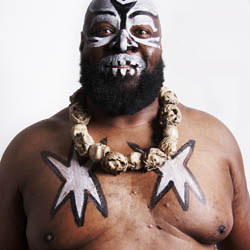 “It was always fun to see the reaction of people when I would come out,” Harris said. “Nobody ever made me do it. I was doing it to make a living.”

But it wasn’t all fun and games. Harris did have his run-ins with discrimination as well. But not necessarily based on the color of his skin.

“There were a couple of territories that I worked where I was discriminated against. I never thought it was because I was black. It was usually because I wasn’t part of a clique,” Harris said. “Sometimes I wasn’t paid very well. I would always get to the arenas early and try to get a decent locker room. But then some of the agents would walk in and ask me what I was doing and get me out of there, so they could put somebody else’s name on the door. I don’t think it was because I was black. I just wasn’t a big enough star like [Hulk] Hogan or Andre [the Giant]. In the ring I was a big star, but backstage I was a nobody.”

There’s a common saying that in the wrestling business that there is something for everyone. Johnson rose to fame by winning those world titles in three different territories and later teaming with Tony Atlas to capture the WWWF Tag Team titles, making them the first black tag team champs in a major promotion.

But when Ron Simmons won the WCW World title in the early ’90s, or even later, when Booker T or The Rock won world titles in their respective companies, fans of all ethnicities rose to their feet, to show support, regardless of the race, creed or color of any of those champions.

At the beginning of the century, WCW strapped the proverbial rocket to Booker T’s back, right before the company went out of business. And even then, Booker considered himself a role model for young African-Americans. 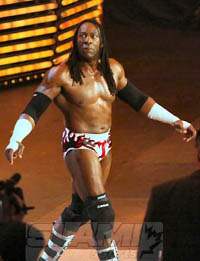 “I tell black people, don’t be discouraged in wrestling. There’s too few of us in there,” Booker told the Associated Press. “Now they got Booker T out there and everybody’s loving him, and now they say, ‘I want to do that.’ Maybe 10 years from now, we’ll see a whole lot more.”

Ron Simmons attributes his success in wrestling to his strong work ethic, not his ethnicity.

“Everything that I got, I got because I worked for it — not because I’m black,” Simmons told the Associated Press. “I wasn’t brought in as a favorite for anyone.”

Conway recalls one particular instance where being black could have been advantageous. Unfortunately for him, it was the first time he was discriminated against for not being black enough.

“I remember one of the tours we went on, to Johannesburg, South Africa,” Conway said. “There was still a lot of unrest back then between the blacks and whites in that area. It was supposed to be an all-black tour and because I was a little lighter in skin complexion, I wasn’t allowed to go. They would start a lot of riots about that kind of thing back then.” 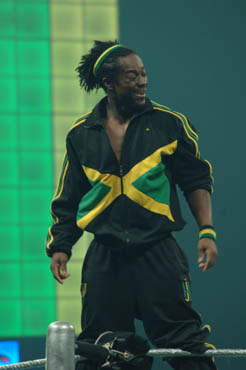 Kofi Kingston, Jamaican, in May 2008. Photo by Mike Mastrandrea

Fast forward to the present date, and as evident by the weekly television programs, there is certainly a lot more diversity in the wrestling business. But some things haven’t changed. There are still certain gimmicks, or angles which may be offensive to fans of specific ethnicities.

Kofi Kingston for example, was originally introduced as being from Jamaica. But apparently that gimmick was a mirage, as fan are now supposed to believe that he’s from Ghana, West Africa. As little sense as the change in location made, what really had fans scratching their heads is the fact that Kingston’s once strong Jamaican accent has vanished. Perhaps it was all a figment of the imagination. Whatever the case may be, Kingston is a professional, and had no problem adapting to the overnight change in character.

“Most of us wear different hats. We’re our own accountants and marketing representatives. We’re actors and athletes,” Kingston said. “A lot of people don’t understand that WWE is World Wrestling Entertainment. The E is for Entertainment.”

For anyone who stands on the outside of the business looking in, it may sometimes be hard to identify what kind of behavior qualifies as discrimination or what gimmicks can be classified as stereotypes.

Kingston may have put it best that wrestlers of all ethnicities have a job to do, which is entertain. And thanks to the contributions of all the great African-American wrestlers who came before him, Kingston is blessed with the opportunity to do just that.