Chris Jericho’s latest autobiography, Undisputed, is only disappointing in comparison to his first one, A Lion’s Tale. The difference stems from the very nature of his career, as recounted here. Whereas he once was an up-and-comer, struggling on the indy scene, he’s now a WWE star and sometimes a rocker.

In short, the big leagues are never as funny as the minor leagues. Slap Shot was great, but The Tooth Fairy or Mystery, Alaska, not so much.

That said, Undisputed: How to Become the World Champion in 1,372 Easy Steps still deserves to be ranked amongst the top wrestling autobiographies e-e-e-e-v-v-v-e-e-r-r-r-r. 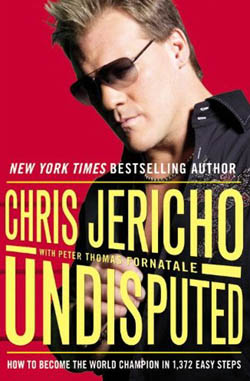 And anyone who reads it will be laughing at the stories, touched by the honesty and emotion, and absolutely over the moon that this isn’t a WWE-sanctioned book.

Undisputed, co-written again with Peter Thomas Fornatale, picks up where A Lion’s Tale left off, with Jericho making his WWE debut, about to verbally spar with The Rock. The insight into his debut is fascinating. “My cowardly heel routine made it hard for the audience to believe that I was a credible opponent for a megastar like The Rock, even though that was the initial plan,” he writes, unashamed to acknowledge his failures.

Jericho goes into detail on how he began “stockpiling nuclear heat” backstage, while naming names and exploring the multiple reasons.

This is a decidedly non-PG book, not quite rated-R, but getting close with the tales of boozing and good times. It also makes me miss the so-called “Attitude Era” of the WWE, where Jericho was allowed to call Stephanie McMahon all kinds of wicked names, while the fans chanted along.

As it is also a non-WWE sanctioned tome, thankfully, and Jericho is allowed to address the backstage relationships, including Triple H and Chyna, and then Triple H and Stephanie, his contract negotiations, payoffs and paycuts. After one particularly bad dispute with the boss, Vince McMahon, Jericho sought out Bret Hart for some advice. The Hitman said that McMahon “was like a drill sergeant who liked to tear people down and build them back up in his own image,” to which Jericho writes, “Well, he had done half of that so far. I just hoped he wouldn’t rebuild me with a bad pompadour and a loud suit.”

Along the way, Jericho shares his recollections of some significant WWE moments, including Droz’s accident which left him paralyzed, his storyline (and backstage clashes) with Chyna, the arrival of screenwriters to the WWE’s writing staff, Eddie Guerrero’s death, TNA’s growth, and Goldberg’s arrival and departure from the company.

He leaves the most significant one, the double murder/suicide of Chris Benoit in June 2007, to the end of the book, coincidentally almost the same point where Jericho had decided to return to the WWE, which is, once again, where his book concludes.Benoit is one thread that runs throughout the book, and a far more serious one than the jabs at Mick Foley, who wrote one foreword (Zack Ryder wrote the other, better one, surprisingly).

As painful as the memories of Benoit’s end may be, Jericho still has fond feelings for their in-ring performances, and reminds readers again and again that it’s “unfortunate” that the footage has “been buried forever and technically doesn’t exist anymore.”

Like with Foley’s recent efforts, the side ventures, like Jericho’s Fozzy band, are nicely compartmentalized in chapters, allowing fans who aren’t into the music scene to skip ahead. Doing so would miss out on a lot of humour and heart of the book, but unless you have a serious love of metal music, the names and songs will mean little to you.

On the personal front, we’re privy to Jericho’s wedding, the birth of his three children, his mother’s death, and his forays into acting. In particular, the writing on his mom, who had been paralyzed for a number of years, was touching, and Jericho’s efforts to forgive the man who caused her injury should be a lesson to us all. Some of the stories about his dad, Ted Irvine, who played in the NHL, are poignant as well, in particular the Stanley Cup story.

My only complaint (aside from the generic cover) is more of a warning: Undisputed lurches from funny to serious to affecting, from his twin daughters to Axl Rose to Chris Benoit, leaving the reader shaken from the roller coaster ride.

But it’s all good, and leaves the door wide open for book number three.