Some people visit a psychologist or watch Doctor Phil to deal with their frustrations. Maggy Goyette — a.k.a. Kalamity — finds it more therapeutic to be a pro-wrestler. “After a long week of work, I feel a complete sense of freedom being in the ring,” said Goyette. “I can become another person. I love wrestling. It is my passion.” 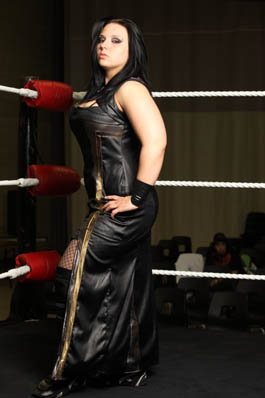 The Montreal-based Goyette fell into wrestling by accident. “I started attending matches with an ex-boyfriend in 2004. At first, I wasn’t really a fan but started to enjoy it,” remembered Goyette. “Eventually, I started managing wrestlers. The promotion as wanted to have female wrestlers so I volunteered. After six months of training, I had my first match and became hooked on it.”

Her gimmick as Kalamity is a far stretch from Goyette’s true personality. “Kalamity is violent and sets out to destroy her opponent. She wears a long robe and is very aggressive. Outside the ring, I am quite shy and quiet. I love to be able to play this character who is so different from the real me.”

She did not immediately get support from friends and family for her new-found passion. “My mother was very nervous at first about me becoming a wrestler. She did her best to discourage me and many of my friends thought I was crazy. I am glad I am did not listen to them. Now, my mother is a huge supporter and attends the matches when she has a chance.”

Like most other pro-wrestlers, Goyette’s time in the sport has not been pain-free. “I have been lucky not to have had any serious injuries. However, after a match, I often have a bad back or sore knees. It is just part of the profession.”

Even though Goyette did not plan on becoming a pro wrestler, she takes her vocation very seriously. “I am constantly trying to improve by taking courses and seminars. I also train with LuFisto whenever I have the opportunity. LuFisto is a great role model because she is the best female wrestler to come out of Quebec. She has 13 years experience and has wrestled around the world.”

LuFisto feels a mutual sense of admiration. “Kalamity is a good worker because she works hard at every little detail. She accepts and works on her weaknesses constantly,” commented LuFisto. “She always wants to learn new things and is open to criticism. She’s also not afraid to put in efforts, make sacrifices and get hurt trying. She’s also one of the few in my area who is interested in working strong style. She’s as tough as they come.”

Goyette has made her own mark on female pro wrestling. She has had bookings all over Quebec and has also wrestled in Ontario and New Jersey. She would eventually like to broaden her horizons to include further bookings in the United States and Japan. 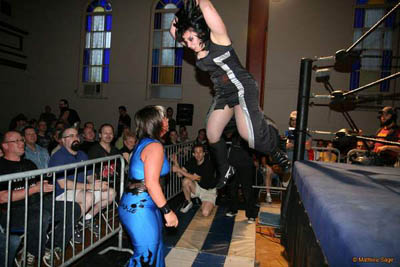 Kalamity flies onto Sweet Cherrie outside the ring at the NCW Femmes Fatales show on Saturday, June 5, 2010 at the Centre St-Barthelemy in Montreal. Photo by Mathieu Sage

The promotion closest to Goyette’s heart is the Femmes Fatales organization, based out of Montreal. “Femmes Fatales gives Quebec female wrestlers a chance to wrestle top names from all over the world. I will be wrestling for Femmes Fatales on March 12 and am extremely excited.” On that show, she takes on the highly-respected Mercedes Martinez.

Goyette may be passionate about pro wrestling but does not follow it on television. “Female wrestling in the WWE is just women who are beautiful but do not have any talent as wrestlers. Their appearance is much more important than their ability. TNA is a bit better but still has a long way to go.”

Stephen Johnson knows a little about calamity with a two-year-old boy running through the house.