One of the true pioneers, the great African-American wrestler Tiger Conway Sr., passed away last night in Houston, Texas. He was 74.

Plasse Dennis Bradford Conway was born August 4, 1932, in Shreveport, Louisiana. His parents lived on a plantation owned by an African-American named Willie Logan. 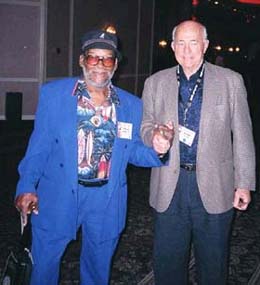 Arriving in Houston in 1947, Conway Sr. broke into the wrestling business through Danny McShain, who took a liking to him when Conway was working at a Houston hotel. He debuted in the mid-’50s in Texas and was billed as Texas Negro champion.

“Wrestling, between you and I and everybody else, is the greatest sport, I think, in the entire world,” Conway Sr. said in 2003.

But Conway Sr. was a pioneer, fighting racism throughout the South, as he competed on what was known as the segregated “Chitterling Circuit.” Early on, he could only compete against others of his race, like Dory Dixon and Willie Love, with bouts promoted as for the “World’s Colored Championship.” Only later, as the desegregation of America took place could Conway Sr. battle the likes of Mad Dog Vachon, Don Leo Jonathan, Tony Borne and Dick Steinborn.

In fact, in the 1960s, Vachon broke Conway Sr.’s leg, and he suffered a broken kneecap and torn cartilage. Conway Sr. would not have knee surgery, yet would wrestle for seven more years.

Many of today’s fans would know Conway Sr. through his son,Tiger Conway Jr., who wrestled through the 1980s and into the 1990s. Father and son did get to team on occasion around 1979, in the latter stages of Senior’s career. Tiger Sr. and his wife, Inita, were married 56 years.

In a 1994 article in Our Texas magazine, Inita Conway tells the story of climbing in the ring to defend her man, doffing a high-heeled shoe and wielding it as a weapon until she was escorted back to her seat.

A lifetime member of the Cauliflower Alley Club, Conway Sr. was a fixture at the reunions. In recent years at the gatherings in Las Vegas, Conway hobbled around with his flashy clothes, cane and hat and twinkling smile; he was someone that everyone knew and would stop and talk with.

“This convention is the best,” he said in 2003. “I’m a paid-up member of the Cauliflower Alley Club, and I appreciate this.”

It was a chance to see many old colleagues. “It’s the relationship I have with all my friends. We go back 50 years. Don Leo Jonathon, Paul Vachon, Red Bastien. I’m talking about people going back 50 years. That’s the special thing I wait for. Each year I wait for the next one to begin. I think we should have them every six months because we’re losing too many of our people now. If we wait for a whole year, sometimes we miss out.”

Following his wrestling career, Conway Sr. ran a fence-building business. He also served on the board of directors for the Christian Alliance for Humanitarian Aid, Inc.

A few days ago, Conway Sr. had a massive stroke and a brain aneurysm, and remained in critical condition in St Joseph’s Hospital in Houston until his death Monday night.

Funeral arrangements are not yet known.