Over the last few Topps/WWE releases, you’ve probably become accustomed to seeing me give this reason or that reason as to why you should pick up a product. With WWE Heritage II, the latest release from the New York-based company, however, we’re going to change things up a bit.

You see, there’s a certain realization that comes with having done three WWE trading card reviews — collectors will most definitely get a complete set out of a box, a couple good bonus cards and, in most products, some unique inserts.

With Heritage II, SLAM! Wrestling has been afforded a rare opportunity to look not only at the set, but at the hobby and retail versions, as well as a couple special package releases as well. So let’s look at each on its own. 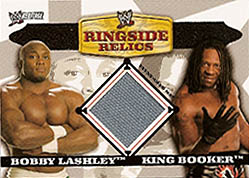 Bobby Lashley and King Booker squared off on this ring mat on June 30’s Smackdown episode.

By far the most common release that collectors will find, the Hobby Box will almost certainly offer a full 90-card base set to a breaker. On top of that, you’ll have 22-odd doubles either for trading, keeping or even, if you are really ambitious, autographing.

Hobby also offers up a few unique collectible opportunities. The first pops out as soon as you open the box, in the form of the photograph-sized Tag Team Superstars cards. These pieces offer up some of the WWE’s best tandems, including DX, in a nicely-sized keeper.

Next up are the Turkey Red WWE Legends cards. Turkey Red, for those who didn’t read my set preview (and if you didn’t, shame on you), Turkey Reds were originally a baseball set issued in the late 1800s with a lithograph feel. Thus, the legends are a better way to spotlight the history of the set, and it doesn’t get any better than the Andre the Giant card (which, unfortunately, eluded me).

Now we get to the goodies — the value cards. Both the event-used relic and autographed cards return this year. Again, however, I’m disappointed with the use of tee-shirts over other memorabilia in the Ringside Relics cards. Let’s hope that my pleas for trunks, knee pads or other equipment will be used next time. The signatures are also pretty crisp and, for the value fiend, are the number one reason to get into the hobby box.

For my money and enjoyment, I’d lean more towards a Retail Box, which offers up approximately one set and 18 doubles. Fewer base cards (translating to less of a guaranteed set) yes, but the real value here is in the inserts.

First up are the Turkey Red cards. While both retail and hobby distribution have these cards, retail has the current talent featured, with names like John Cena and Rey Mysterio highlighted. The design on these cards is crisp and has become hot in baseball and football.

For kids, there’s a good reason to go after the retail packs, because there’s a good chance you’ll pull a magnet card, which makes for a fun display in lockers. Like last year’s stickers, the cards are die-cut and, despite the posed shots, are pretty slick.

The best cards, however, come in the retail-only event-used mat cards. What makes these cards so appealing, aside from being a piece actually used during competition, is that they are event dated. For a sports collector like myself, this is a HUGE step in adding to the enjoyment as it gives a bit of origin to the card and makes it all that more special.

Another retail release, these offer up a good starter for a base collector, a regular-sized version of the aforementioned tag team cards and a unique bonus card that parallels certain base cards. As well, the cards come in a collectible tin featuring a WWE superstar.

The final distribution offered is two-retail back blisters. All of the inserts are available here, plus a standard-size tag team card in each pack.

So now that all the options are before you, be sure to grab Topps WWE Heritage II while you can.