Kurt Angle is ready. TNA is ready. Will it pay off? That is the question that will be answered this Thursday as Kurt Angle makes his in-ring debut with TNA on a special two-hour Impact.

TNA is starting him out with a bang as he takes on Abyss, one of TNA’s biggest stars. The match is a warm-up for Angle’s match with Samoa Joe at the Genesis pay-per-view on Sunday. 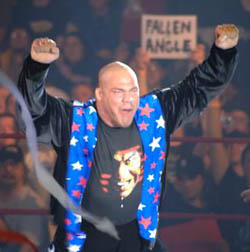 Kurt Angle at Bound For Glory. – photo by Mike Mastrandrea

This is a new world for Angle. Angle spent the first seven years of his career with the WWE. TNA is full of dozens of wrestlers he has never seen, and he isn’t just sleepwalking in.

“I’ve been studying the wrestlers,” Angle said during a recent conference call, “learning different things, learning different methods of how they go about their style of wrestling. I’m a guy who sits down and studies films for hours.”

Angle may not be aware of all the wrestlers in TNA, but they sure are aware of him.

“He is a household name,” Eric Young recently told SLAM! Wrestling. “His name is marketable and people who don’t watch wrestling may know him.”

“His signing is proof that TNA is growing,” A.J. Styles said. “And when you got someone as reputable as Kurt Angle wrestling for TNA, it just shows how big TNA is.”

Can TNA now be a force in the business? TNA sure believes so.

“I compare him to a franchise quarterback,” Dixie Carter, President of TNA said. “He will raise the level of everything within the company.”

TNA hoped for a similar change with the signing of Sting in 2005. The move did create some early buzz, but ratings and buyrates remained unchanged.

Angle is a different person than Sting. He is younger and fresh in the minds of wrestling fans. He was signed just a few weeks after last appearing on WWE television. Sting had almost five years pass since he was last on national television. Although their names in wrestling history may be similar, timing is everything in wrestling.

This will be a highly anticipated Friday as TNA will await the ratings from the night before. TNA has taken giant steps because of ratings, and they hope that this will be no different.

“We’d love to see two hours in the future,” said Steven Godfrey of TNA public relations. “We are limited on what we can do right now and would like to expand storylines and angles.”

TNA matches Angle up with Samoa Joe in Angle’s first match on PPV. Angle is a name every wrestling fan knows well. Joe is a name that TNA has been pushing in a manner similar to Bill Goldberg’s initial WCW run. Samoa Joe has yet to be pinned in a TNA match. Something has to give.

After Joe, which TNA may carry out over a few PPVs, the list is wide open as Angle has a fresh list of wrestle to step into the ring with. A major problem many see with WWE’s dominance is the lack of fresh match-ups. Angle had wrestled everyone in the WWE ten fold. He now has a clean slate.

Thursday will be TNA’s most anticipated Impact in the history of the company. They signed Kurt Angle, one of WWE’s biggest names during their most profitable years, and TNA is hoping he can do the same for TNA.