Tonight marks in a new era for TNA. Not only does Kurt Angle make his in-ring debut but Impact makes its move to 9 p.m. ET on SpikeTV.

The move from the old time of 11 p.m. ET is a giant step for TNA who hopes this timeslot will bring a large increase in viewers. Thursday has always been a strong night for basic television, but the time difference is what TNA is most excited about. 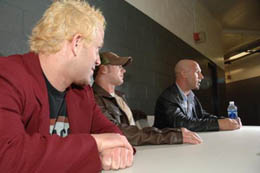 Eric Young, A.J. Styles and Christopher Daniels address the media before the Bound For Glory pay-per-view. Photo by Mike Mastrandrea

TNA is banking on higher ratings to convince SpikeTV to give TNA a second hour of programming during the week.

“We have always wanted two hours,” Godfrey said. “It would help everything in the company immensely.”

The talent is excited about the move as well.

“This is exciting for the wrestlers,” A.J. Styles said. “It’s a giant opportunity for us.”

Tonight’s Impact will be two hours and feature a PPV-like line-up.

Kurt Angle will make his in-ring debut against TNA’s monster, Abyss. Angle’s debut has been heavily hyped in commercials airing not only on TNA but on other cable stations. TNA even bought airtime during WWE’s RAW. (TNA purchased time through local cable companies without WWE’s control or knowledge.)

Angle is set to wrestle Samoa Joe at November 19’s Genesis PPV while Abyss gets an NWA World Title match with Sting.

Also on Impact, in a Six Sides of Steel Barbed Wire match, Christian Cage will take on Rhino. This match is expected to be the payoff to their long feud.

In an X Division Title match, the champion A.J. Styles takes on Christopher Daniels and Chris Sabin in three-way match. Both Daniels and Sabin are former champions looking to take back their title.

Samoa Joe will get a warm-up to his Genesis match with Kurt Angle when he takes on Jay Lethal.

In a tables match, Team 3-D takes on the Naturals with Shane Douglas. Winner is in line for an upcoming tag team title match with The LAX.

David Eckstein of the St. Louis Cardinals — and the World Series MVP – will be making a guest experience. Also, the James Gang will cut a promo on Vince McMahon and the WWE.

“It is all happening at once,” Christopher Daniels said. “We get the new time slot, Kurt Angle is here, it shows that we are growing rapidly. We are taking steps and these are two giant ones.”