Tonight is Jeff Jarrett’s big night. With TNA about to begin a regular Thursday primetime time slot on Spike TV, Jarrett was in a talkative mood earlier this week. Given that he has invested more effort than perhaps anyone to bring TNA to this level, he has earned that right. 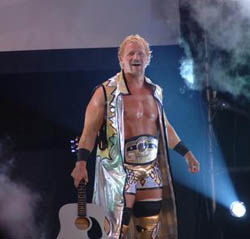 “Double J” waxed eloquent with reporters on Tuesday in a conference call, discuss the future of the promotion that he helped found, talent comings and goings, his own future, and a little more too.

“We’re really excited about where TNA is at as a company,” he began as means of introduction. “It has been a crawl, walk, and run situation, but (the move to primetime) is a great step for us as an organization.”

Over the course of 90 minutes, subject matter swayed from talk of the new primetime slot, to even of a possible TNA appearance by the Ultimate Warrior. Shockingly, in the case of the latter, Jarrett was complimentary about the former WWF champion, and noted to “never say never” in the wrestling business.

Speaking of controversial characters, the re-hiring of Vince Russo was another topic of questioning, especially in consideration of how this would affect TNA’s relationship with Jim Cornette.

“Vince has been a part of the WWF and WCW,” said Jarrett, “and I saw first-hand Vince’s strengths and weaknesses. We will focus on his strengths. When Jim Cornette and Vince are in the same room, it is a very interesting dynamic. In this business you have to decide which comes first, ego or business. The guys that draw that line, and do business, are the successful ones. And I consider Jim a successful person in this business.”

TNA’s November 19th pay-per-view, Genesis, was next on the agenda. The event will play host to the in-ring debut of Kurt Angle, as he faces Samoa Joe in what for many people, is a dream match. Jarrett commented:

“Every pay-per-view main event, at this stage in our growth, is the most important match (in our history). We have to continue to prove ourselves. Our pay-per-views have to be exceptional. I don’t believe that anyone is expecting anything less than a spectacular match on Sunday night.”

When a question was asked regarding two TNA shows that were abruptly cancelled by building inspectors in Connecticut this past weekend, Jarrett would not name names, but said that he found the action “odd.”

“I haven’t heard of any show that has been cancelled on the same day. And not only one building but two buildings had calls put in about them? There’s the old saying, ‘if it looks like a duck and quacks like a duck, you needn’t ask what that thing is.’ It sounds awful fishy to me.”

Back on topic of the primetime show, Jarrett hinted at what TNA would consider a successful rating in their new time slot.

“With us currently at an average of 1.0, I think moving into primetime, we’re looking at a jump of some tenths of a point. January, February and March are going to be very interesting to watch. A 1.2 or 1.3 would be considered a very successful program, although in TNA, we want to do much better. We’re expecting great things over time.”

After confirming that one wrestler (Monty Brown) was indeed through with the company, Jarrett then spoke warmly of another, Chris Jericho, who is rumoured to be interested in coming in.

“I’ve known Chris for over 10 years, and I’ve always respected his ability. He still has a lot of great years in him. If Chris decides to come back, I have no doubt in my mind that it will be because he truly wants to, and because he loves the business. I believe it is something we can work because of the advantages of our schedule.” 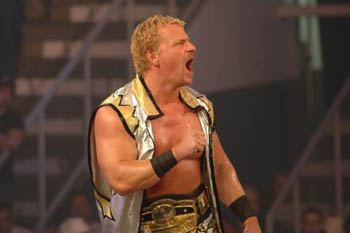 Jeff Jarrett at Bound For Glory, where he lost the NWA World title to Sting. – photo by Mike Mastrandrea.

With regard to the prospect of taking TV and pay-per-view on the road, a la Bound for Glory from Detroit, Jarrett was cautious about a move from the Impact Zone at Universal Studios.

“The smart situation would be to take pay-per-views on the road. We want fans to have a fantastic three-hour experience, where that fan walks away with nothing but glowing reports about the TNA experience. We need to continue (where Bound for Glory left off), before we even consider taking the television product on the road. But things in this business can happen very fast!”

Further to that comment, the former Double-J added his backing to the idea of Impact being aired live.

“It goes without saying (that Impact would benefit from being live). It is something that is in development between TNA and Spike. Monday Nitro always had a magical feel about it, and you can only get that from live television. If you put a football or basketball game on tape delay, the results will be in the numbers. Wrestling has that same aura and feel about it.”

When it came to SLAM! Wrestling’s turn to speak with Jarrett, he was asked whether he felt TNA attracts viewers from the WWE fanbase, or whether they are more likely to pick up fans who are currently disenchanted with the WWE product.

“Going back to a study from five or more years ago, when WWF and WCW were at their height, basically there was only a 10%-15% crossover (between WWF and WCW),” he replied. “I don’t think the American public has changed drastically from that. Do I think we can capture part of WWE’s audience? Absolutely, because we are both professional wrestling. But I think there are a lot of fans out there who went away from wrestling. They quit watching when WCW went out of business. I think they are out there for us to get.”

Somewhat surprisingly, it took until the end of the conference for the future of Sting, current NWA World Heavyweight champion, to be discussed. The Stinger’s one-year contract is up in a matter of weeks, and Jarrett was somewhat coy on the champion’s status for 2007.

“Negotiations are going on. Sting is highly-motivated, and he took his game to another level (at Bound for Glory). He has always had that ‘it’ factor. We are certainly excited about taking TNA and Sting to the next level.”

Whether or not Sting remains in TNA will be decided in the coming months, but following his locker-room promo shown on Impact two weeks ago, Jeff Jarrett, professional wrestler, is “going home” for the foreseeable future. Given the style of that interview, he will more than likely return to TNA as a babyface.

“What you saw on TV, was speaking from the heart,” Jarrett said. “I’ve been going wide-open for four and a half years. I’ve got a lot on my plate, both personally and professionally, and the place for me to be right now is not in the wrestling ring. I’m taking it day by day.”

Though many have suggested that Jarrett’s recent presence on television turns more people off than it does on, it could easily be argued that if not for him, TNA would not be around at all. With that in mind, let’s hope that Jarrett doesn’t spend too long away — either in front of, or behind, the TNA camera.