Pillman DVD flies above the rest

Brian Pillman: Loose Cannon may be the best biography DVD that WWE has put out. Honestly, I thought it was more like an A&E Biography episode, as many of Pillman’s friends and family were brought in to talk about his life, as opposed to just current WWE stars as is often the case.

Let’s have a look at what is included:

The DVD goes into great detail about how people dismissed Brian as a potential athletic star, and how this was his motivation to accomplish everything that his heart set out to do. It was that drive that allowed him to shine as a high-flying singles wrestler at a time when nobody was performing in that style. Then to go on to create one of the best tag teams of the ’90s, the Hollywood Blonds, despite the fact that he and partner “Stone Cold” Steve Austin weren’t meant to have success in that role. The DVD does an excellent job of chronicling all of these events, showing how a smaller man was able to make it in a big man’s business. 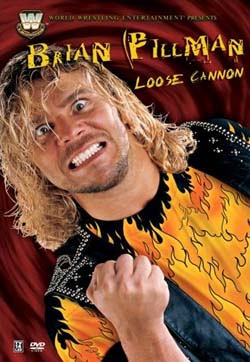 The latter part of Pillman’s WCW career, when he created and perfected his Loose Cannon persona is given a lot of time as well. That character worked, say people like Steve Austin, Jim Ross and others who knew Pillman well, because Pillman blurred reality from fantasy — nobody knew if and when he was playing the role, or whether that was really Brian Pillman’s personality coming through. Unfortunately, this part isn’t as in-depth as it could be, since not all of the players involved participated in the bio for various reasons. For example, it would have been interesting to hear the thoughts of Kevin Sullivan, with whom Pillman had his last major feud in WCW. Even though that is unlikely given the history that they had, and Sullivan’s non-affiliation with WWE, it would have been a nice touch.

After that, Pillman’s brief controversial ECW stint is discussed as is his near-fatal car accident that shortly preceded his entry to WWE. Driven by a need to prove himself in WWE, Pillman came back, in hindsight probably too soon, and his desire to keep going was a major factor in his subsequent addiction to prescription pain medication. You can see the sadness in the eyes of the people who were close to Brian during this segment — Jim Ross is visibly shaken when talking about Pillman’s downward spiral into addiction. Even when his career was at his highest point — his memorable feuds with Steve Austin, his joining the Hart Foundation, and his last angle with Goldust and Marlena are all given fair coverage — he was at his lowest both emotionally and physically. Soon thereafter, he passed away.

The footage of the memorial 10-bell salute held for him is sad to watch, not only because of the circumstances, but also because now looking back, you see how many of the others who were there at the time have left us as well.

Notwithstanding that, it’s Brian’s widow Melanie that ends the disc, noting that Brian’s story is one of inspiration — that he didn’t let anything get to him or let anything stop him to do what he wanted to do. The DVD, she says, should be considered a tribute to Brian’s heart, his intensity, his wit, his vision. And the message to take away is to not waste the chance to live every second of your life the way you want to.

Overall, I found the biography portion of the set to be a compelling and entertaining watch, and would highly recommend it for any wrestling fan.

As the DVD has a very good selection of matches and bonus features, it’s hard to be too critical. If there is one complaint, it’s that they should have included more promos and interviews with Pillman, particularly from the tail end of his WCW days and his ECW and WWE stints, since those were really where his Loose Cannon persona took the forefront.

The biography portion included clips from several classic Pillman moments, like his ECW debut in which he legitimately bad-mouthed WCW and then cut a promo on the fans, and his fight against a giant pencil, so they should have included the full segments as bonus features.

That minor complaint aside, the matches are a good compilation of his career, and you can see how he evolved over the years from an incredible athlete with a spot of charisma to one of the most entertaining performers ever.

My favourite matches on the DVD were the War Games match and the 10-man tag team match from the In Your House in Calgary.

Even as a face, Pillman had an energy and intensity that couldn’t be matched, and he proved it in the War Games match. For those of you who don’t know, in War Games, the teams entered into the double-ring cage on a staggered basis. Pillman was the first of his team to enter, and he remained a central point of focus for the match, looking for revenge on the Four Horsemen who had injured him the night before. A couple of scary moments when he nearly got dropped on his head twice, courtesy of powerbombs from Sid Vicious, prompting the ref stoppage. This match was probably not the best showcase of his skills — for that, you need to watch the aerial clinic that he and Jushin “Thunder” Liger put on, a match that’s also included in the set. But it is fun nonetheless.

Similar comment can be made about the 10-man tag match from Calgary. Pillman, who had been trained in the Hart Dungeon and wrestled in Calgary at the beginning of his career, had been embraced by Bret, Owen, Davey Boy Smith and Jim Neidhart as a brother, even though he had no official family ties. This is made as a huge deal in the biography, with people noting that Brian considered it a legitimate honour to be considered part of the family, and citing this match as one of his favourite moments in wrestling. It’s a pretty decent match marred only by the finish which saw some interference from the Hart brothers who were sitting at ringside. You can tell watching this match that Pillman really loved the moment, and it’s a shame that he didn’t have too many more like that before his passing.