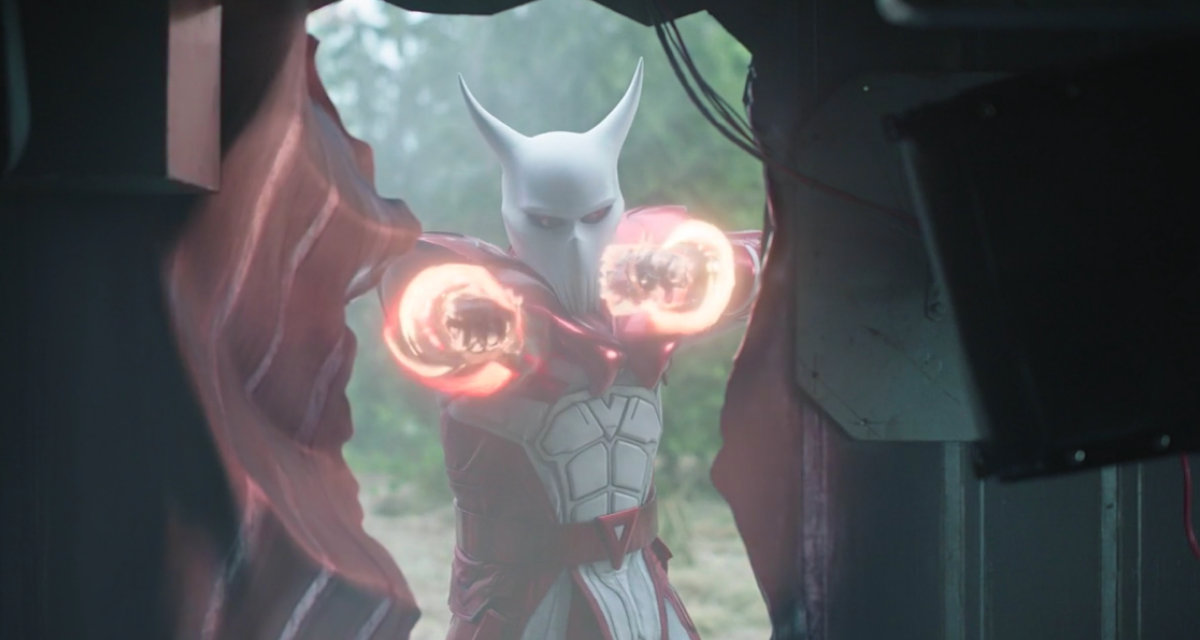 There’s a movie from 1930 that featured the first “talkie” film performance by Greta Garbo, and the film was promoted with the tagline “Garbo Talks!”; nearly 100 years later, I think it’s fair to use “Cena Cries!” as an advert for his latest episode in the role of Chris Smith, AKA Peacemaker.

In the second-to-last episode of the DC Comics series airing on HBO Max and Crave TV in Canada, writer/director James Gunn sticks to a couple of principles that he’s shown in his previous work for both DC (The Suicide Squad) and Marvel (Guardians of the Galaxy).

Firstly, and this is more specifically from The Suicide Squad: nobody is safe from a horrible death. Gunn has no problem taking any character, be they a top cog in the story or a significant name from the credits, and dealing them a death card. That holds true in the seventh episode titled “Stop Dragon My Heart Around” in which two major players exit stage right.

Secondly: there is no right or wrong time to rock. This is uttered by a few characters in the episode, and more than anything it speaks to the mixed-tape mastery that Gunn has employed in his super-hero productions so far. Music is the lifeblood of his storytelling, as his usage of both hits and deep cuts not only support the action but serve to tell the story and teach us about the characters. There are plenty of occasions where both allies and enemies bond or spar over musical tastes, and someone’s preference for a band is a quick way to mark them as likeable or otherwise – just as in real life.

There’s one more trick that Gunn and his partner series directors have helped to bring about, and it has personally been a real eye-opening experience in reviewing these episodes: John Cena is turning in a terrific performance. I’ve already written about how the challenge of this show was to take the one-note character (and, likewise, one-note performance by Cena) from the movie and flesh it out. The production team has succeeded in spades, and it’s borne out in “Stop Dragon My Heart Around” with one pivotal scene.

In it, John Cena cries. Yes, the hallmark of any notable performance, the stuff of satire when Mike Myers delivered an “Oscar Worthy Performance” in Wayne’s World by blubbering about his feelings while splashing water under his eyes, and the bravest thing that Cena has done since strutting to the ring in too-tight tights to challenge Kurt Angle.

Not only does Cena cry – twice, actually! – but he has earned it. His performance has shown continued growth and nuance throughout the series, and when it’s finally revealed in full how his brother died when they were both young, and when the culmination of the fall-out from that event occurs as his father, the white supremacist White Dragon (in a sort-of discount Iron Man super-villain suit), hunts Peacemaker down to kill him, all of the built-up emotion from a lifetime of anger and guilt comes out.

So, kudos to Cena for this work. On top of that, I’m ready to say that Cena is, or has at least been given the opportunity to be, the best comedy actor of the current generation of wrestlers-gone-Hollywood. It’s still a pretty short list, mind you, but compared to Dwayne Johnson, who is so naturally charming but comes off as forced when doing comedy, and Dave Bautista who, in maybe the best transformation from a wrestling persona, is a master of subtlety in his acting, Cena is proving to be the best at hamming it up. Plus, it seems, he’s game for saying or doing just about anything for a laugh.

As to the other characters in this episode, Danielle Brooks as Adebayo continues her excellent work while her connection to Amanda Waller is revealed to the team, with consequences both expected and unexpected; Jennifer Holland as Harcourt gets multiple chances to shine, first in a fight scene with the returning and still funny Nhut Le as Judomaster, and then as she assumes a more powerful position within the group; Steve Agee as Economos and Freddie Stroma as Vigilante take a bit of a back seat role in this episode, but that’s fine for them because they’ve each had big moments to shine already; Chukwudi Iwuji as Murn gets his chance to fully prove which side he’s fighting for between the butterflies and humans; and Robert Patrick’s Auggie Smith, well, continues to be a terrible person.

There is something very refreshing how the show is in no way offering a redeemable aspect to Patrick’s character. He is just evil.

The task force has their final mission in their sights: killing “the cow”, an extra-terrestrial creature that provides the food the butterflies need to survive on Earth. All of the human puppets that the butterflies inhabit, and most of the public that has been turned against Peacemaker thanks to a scapegoat solution from his own task force that went badly, all stand prepared to stop our poor excuse for a hero team.

You can bet on two things in next week’s final episode: not everyone’s getting out alive, and it will be a perfect time to rock.