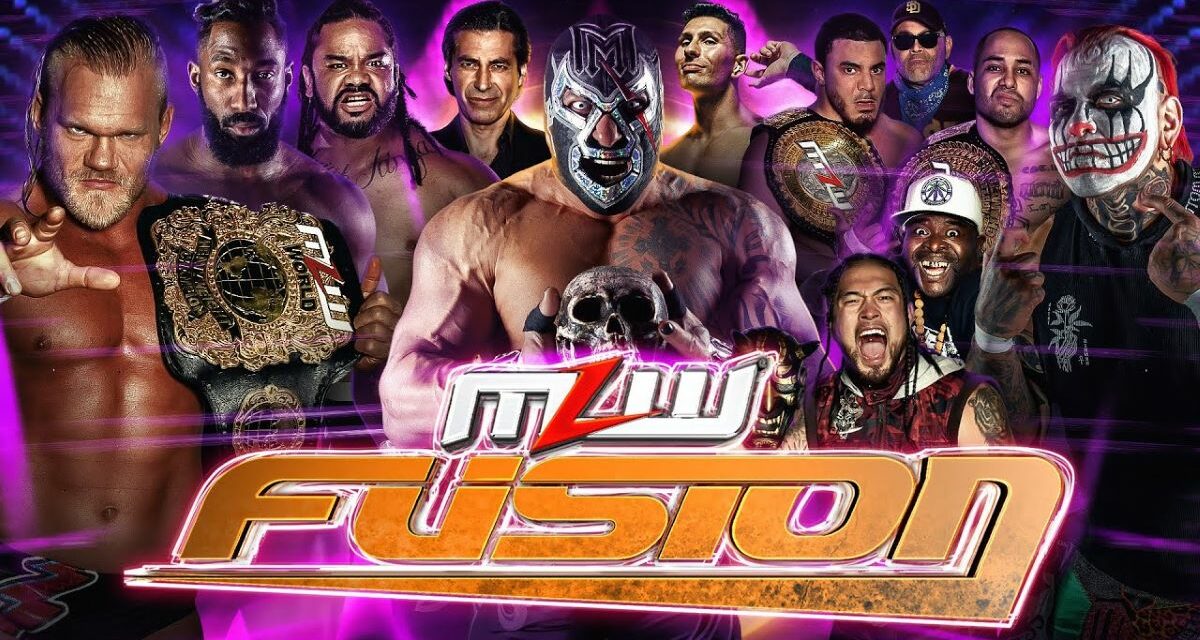 Things haven’t been good for Hammerstone, as he’s been running afoul of El Jefe, Cesar Duran. Just to make things worse, Duran is going to send in the clown…literally.  Hammerstone will face Pagano in a Falls Count Anywhere match for the MLW Heavyweight title, and you know the odds are not in favor of Your Boy Hammer.

We go to El Jefe, who is “in Tejas.” You’d think he’d be happy to be in with Dallas, but he hates being in this “chess pool”, he says. The problem is, Texas is not Mexico. But Duran promises Pagano will get the belt and bring it to Mexico. He promises to the slow folks in the crowd, and speaking oh-so-painfully crowd that Hammerstone’s reign is overrrrrrr.

We're in Texas and "El Jefe" @RealCesarDuran wishes he could be elsewhere.#MLWFusion

Well the show is back to MLW Fusion (with a cool intro effects), and we are at Gilley’s in Dallas, TX. Joe Dombrowski and Rich Bocchini have the call. And it’s time for the First Match of the night, which is…

So this is something new to me, in that…Holliday is getting cheers from the crowd.  Now the last time, Holliday was beaten to a pulp by Muertes and lost his IWA Caribbean championship, so this is the rubber match.  Holliday has more fire going to The Man of a Thousand Deaths, but Muertes still brings the fight.  At one point, Holliday goes up top for a high flying move that misses the mark, but Muertes nails with a spear that cuts him in half.

The match is all Muertes and it leads to…

Ads (Ugh!  Why, when the action is getting good?)

But before he can capitalize, some Azteca Stooges ™ come out to interfere.  As the ref is distracted, one Stooge comes in with a chair, but Holliday chases him off. As he turns back, Muertes gets Holliday with a Straight to Hell flatliner on the chair and gets the pin.

Your Winner via Pinfall:  King Muertes

We go to an installment on another day in the life of Jacob Fatu. It’s different seeing the Samoan Werewolf in a more humble and appreciative mindset, saying that wrestling has provided him a life to live and food on the table.  But his focus is on the MLW Heavyweight championship.

More vignettes play with the TV with the white noise, and the hourglass.  Oh, yes, Virginia…in the end, wherever time is told, everyone pays the toll.  Tick Tock, everyone.  Killer Kross is coming to town.

We go to a mansion that feels reminiscent of PBS’ Masterpiece Theatre (complete with the orchestral music), and we’re joined with Mr. St. Laurent.  We catch him in his library, he says, reading on the greatest discoveries. Well, St. Laurent has found the greatest wonder in the world and he will meet with a Duran to debut the mystery man.

What does @MSL have in store for all of MLW?
#MLWFusion

Whoever it is, it’ll be refreshing that someone isn’t All Elite.

Meanwhile, backstage at the ranch, Emilio Sparks asks Hammerstone a question, but he blows him off to check on Holliday. The Dynasty members, with Alicia Atout, talks what to expect, and Holliday assures the champ that he’ll still be in his corner in the main event.

Now for some beatings we hope you really like, here’s…

We haven’t seen Kwon since the implosion of Contra Unit, but the crowd is heavily cheering the hometown favorite Nduka, as he is a native of Dallas.

Now, folks, let’s not lie:  this match has “Squash” written all over it.  Before I could find a good squash recipe, The Judge layeth the…err, Judgment ruling, and it calls for capital punishment.  He rams Kwon to corners, and gives an old fashioned Oklahoma Stampede (or Texas Stampede, if you will).  That follows to a fireman’s carry to deliver The Verdict, and a pin by boot ends the judgment.

Your Winner via Pinfall:  EJ Nduka

(Author’s Snarky Note:  I know there’s going to be a vacancy in the Supreme Court.  Maybe the Biden Administration should consider Nduka on the bench, if only to see him powerslam Kavanagh.  C’mon, tell me you wouldn’t pay money to see *that*!)

After the match, Kwon gets on the mic, and states he did not lose. He wants another match with anyone…even “to fight the traitor, Jacob Fatu!”  Well, ask and ye shall receive. Fatu comes out to a huge pop, and wastes no time with a uranage to a hip attack in the corner to Kwon. Fatu sets up a table, puts Kwon on it, and delivers splash to break it, and Kwon, in half.

Thanks for playing Kwon, and Welcome Back to the Samoan Werewolf!

We head to MLW SuperFight control center, as they announce big matches like Davey Richards versus Hammerstone for the MLW title. Ricky “The Dragon” Steamboat will be in attendance, and nZo will be fighting KC Navarro in a grudge match.  Also, as stated earlier, Killer Kross is coming back, and that is the only Tick Tock challenge I am interested in seeing.

5150 are in the house, and the MLW Tag Team champs Rivera and Slice Boogie give props to Konnan, stating he’s having surgery and can’t be in their corner. They’ll defend against Los Parks in a ladder match, and you now have a fantastic reason to watch next week’s MLW Fusion.

But for now it’s time for the Main Event, which is a…

There’s chants for Your Boy Hammer, but as soon as the bell rings, Pagano is able to outwrestle the champ from Muscle Mountain.  Pagano goes outside into the crowd, and grabs a garbage can.  He tries to throw it at the champ, but Hammer blocks it.  Pagano tries a Moonsault with the can and misses, and now it’s a powerbomb by Hammerstone onto the can (and it’s a black plastic garbage can, and those suckers have no give.

The action goes outside, with Hammer using various foreign objects to Pagano, including a car hood. Pagano is prone, and Hammerstone covers for a two count.  Now Pagano gets into weaponry, with double pie tins to the champ’s head. Your Boy Hammer answers with a plunger to the head, and follows with a suplex to the apron edge by Hammerstone.  The action rages on the outside, and goes to…

We come back to the backstage as Pagano and Hammerstone keep punching away.  Now the action heads out into the crowd, and Pagano has time for a cerveza (which I applaud.  No holds barred matches is thirsty work).  As they are heading to ring, Pagano grabs some skewers to thrust to the champs exposed head, but Hammerstone blocks.  Pagano keeps working on the skewers, but a well-placed crotch shot stops the momentum, and now the skewers end up in Pagano’s skull, as he tries in vain to pull them all out.  Your Boy Hammer goes back on the offense, and Pagano does an Irish whip reversal and a sliding clothesline to cover for a two count.  Hammerstone returns the receipt with a Stonebreaker (bruning hammer) to cover for a two count as well.

The champ rolls out and gets a wooden board and set it up in the corner of the ring. Then he gets a steel chair to jam to Pagano’s ribs.  Hammerstone climbs back in the ring, but Pagano cuts off the champ with a guillotine leg drop.  Pagano follows up with a nice chair assisted code breaker to cover for a two count.  Outside the ring, Pagano sets up Hammerstone on a chair, and Pagano attempts with a tope con gilo, but Hammerstone moves out, and Pagano lands spine first to the chair!  Now Hammerstone starts to hulk…err, Hammer up, and he gets a missile dropkick to Pagano as goes through the wooden board in the corner.  Once again, an Azteca Stooge™ comes to distract, and Pagano nails Hammerstone with a piece of board to head. Another Stooge comes out, but Richard Holliday evens the odds, so that Hammerstone to deliver the Nightmare Pendulum for the one, two, and three.

Your Winner via Pinfall, and Still MLW Heavyweight Champion:  Hammerstone

As Alicia Atout and Holliday enter the ring to celebrate Hammerstone’s win, and Atout tries interview, but she is having mic trouble.  As Hammerstone waits, Atout goes to check the mic…in Hammer’s crotch!

Ladies and gentlemen, Holliday has backstabbed his Dynasty partner, and has turned back to the Douche Side of the Force ™, as he drives the bat to his back. Atout gets the belt and hands it to Holliday, as they start to make out like drunk tweens over the prone carcass of Your Bot Hammer, as the show fades to black.

This is a good show to kick off the new MLW Fusion, and it brought the action.  But the urn by Holliday is what looks to give challenge some legs.  Definitely worth watching, and with some other folks coming up soon, I am looking forward to watch takes place next, like next week’s tag team ladder match with 5150 and Los Parks.