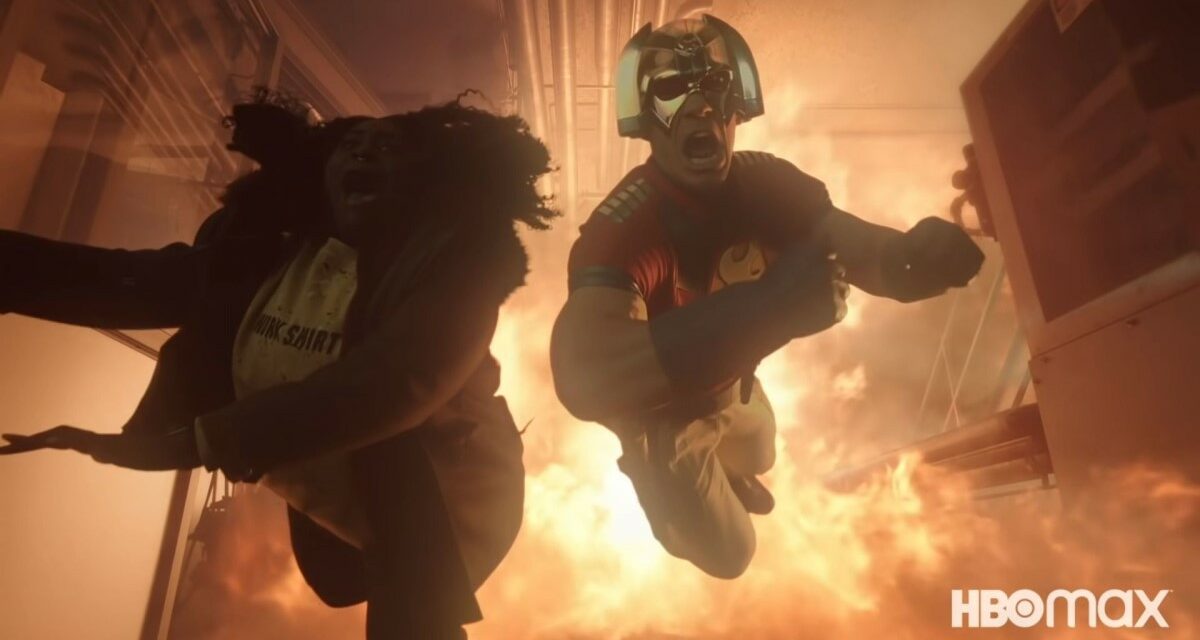 Of course Peacemaker, otherwise known as Chris Smith, wears acid wash jeans. This is an anti-hero who lives by a twisted mantra of virtue that would make 1980s icons like Rambo proud, he’s a juvenile tormenter of those trying to befriend, or at least tolerate him, and to top it all off he’s played by John Cena, who kept the jean shorts industry chugging along for close to a couple of decades.

So in the fifth episode, titled “Monkey Dory”, Peacemaker takes a moment to pause and reflect on the wild ride that the previous episodes, and The Suicide Squad movie as well, and he stretches out his legs in those very ’80s acid wash jeans next to his best friend Eagly the Eagle for a few moments of peace before the weekly adventure begins.

He has a lot to ponder, too, with the revelation that an unknown number of humans are being controlled by “butterflies”, the name given to an alien parasite by Peacemaker’s off-the-books government squad tasked with finding and eliminating them, and the imprisonment of his own father by that very same squad, in what was an attempt to deflect police interest in Peacemaker’s own unlawful conduct.

There was big news last week that Chris wasn’t privy to, also: the squad’s leader, Murn, is carrying that same parasite host in his head as he leads the group with whatever ulterior motive he may have in mind.

The mission for this show seemed to be twofold from the beginning. Firstly, to necessarily flesh out Peacemaker’s character from the one-note joke he played in the film to something that could carry a short series. That much has been accomplished, with thanks to both the writing of the series by James Gunn, and the performance by John Cena.

The second is related, which is the slow babyface turn for Chris. Again, this goes rather nicely in hand with the goal of enriching our understanding of his character. The more that we as the audience get to know him, the more probable it is that we will come to like him. Mind you, there are certainly characters in the show that we like less as we get to know more about them, so it’s not as simple as that.

The clever strategy that Peacemaker is using to have us come around to his side is by having characters in the show do the very same thing. Nobody on the task force to which Chris is assigned started out liking him. They’re repulsed by his boorishness, his near-misogny, and his soft bigotry. To a person, they repel his advancements of becoming friends (or more), and as an audience it’s easy to stand with them and reason that if nobody likes him, we’re right not to as well.

However, as even the people who were most opposed to Peacemaker’s usefulness to the mission or his value as a person in general start listing off his good qualities, or at least his not-so-bad qualities, it lays the groundwork for Chris to really break out as a hero by the end of the show.

This was evident with a few people in this episode, but most notably in the relationship between Chris and John Economos, who is played by Steve Agee and has until now been dubbed “Dye Beard” by Peacemaker. These two flat-out don’t get along until a moment near the end of the show tilts the scales to where they have something to bond over. The sacrifice might be that Peacemaker’s razzing of Economos has been really entertaining, and maybe at its best in this episode.

As Chris makes fun of a slideshow presentation that Economos put together, it comes out that he’s still really, really mad at him for framing his father. It’s good to see that plot point be taken to task as a pretty dumb decision by the character, because, well, it was. Chris even lists off a slew of names that would have been better choices as far as someone to take the fall for him.

The list start off as a ridiculous role call of celebrities from Ariana Grande to Tom Hanks, and ends up as a ridiculous role call of fictional characters, the best of which is when Chris lists off first Mario, and then Super Mario. If you haven’t been sticking around until the end of the credits, be sure you do for the full list which was revealed to be almost completely ad-libbed by Cena.

The hunt for information about the butterflies leads the team to a factory where the food that the aliens ingest is being processed, and there’s a violent confrontation with a slew of humans carrying the parasite — and also a talking gorilla who had been teased in previous episodes and thought to be DC supervillain Gorilla Grodd. No big spoiler here: it’s not Grodd. His name is Charlie, and what happens with him is the spark that allows for Peacemaker and Economos to spark something of a friendship.

We finish the episode on a tremendous cliffhanger, as Adebayo, played by Danielle Brooks and pictured in the top image escaping an explosive blast alongside Peacemaker, has returned to HQ late at night where only Murn remains at work. Toying around with Chris’ X-Ray empowered helmet, she discovers the secret of her boss and he chases her out into the street, and that’s exactly where we end it.

It’s hard to see how she’s going to get out of the situation alive, but I expect this is where the trust that is forming within the team will pay off, and someone will have been watching closely enough to help.

With only three episodes left, stay with SlamWrestling.net for our weekly reviews! Peacemaker is available through HBO Max, and also on Crave TV in Canada.