Shooter Storm, dead at 39, made others laugh 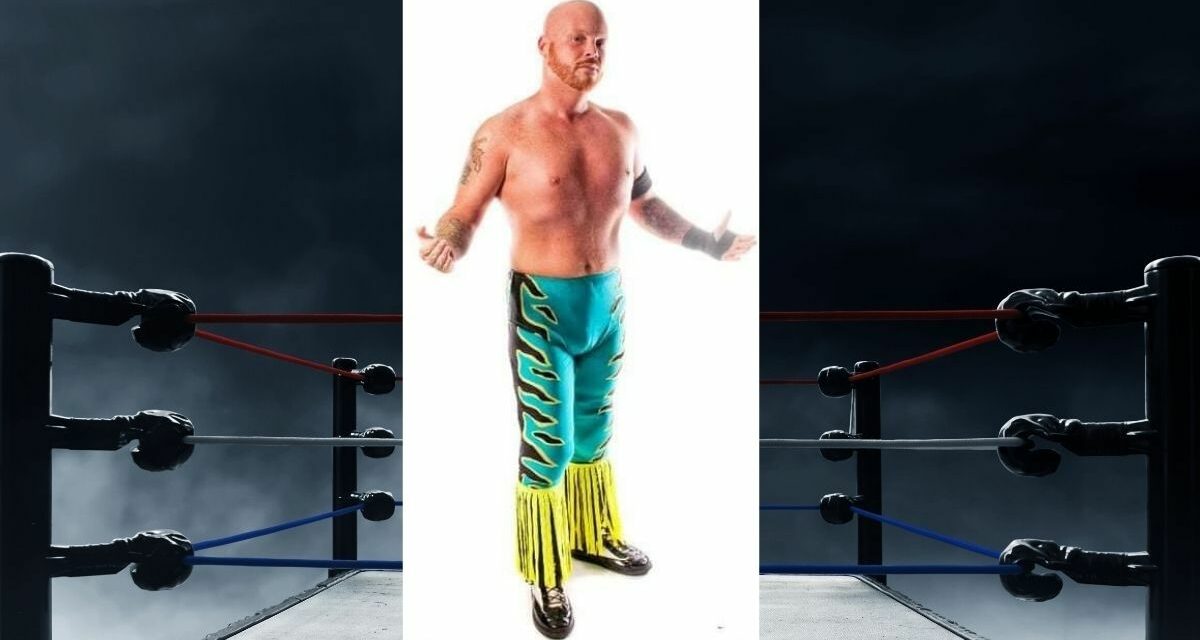 Shooter Storm, a long-time independent wrestler and promoter out of New York State, who also appeared on The Jerry Springer Show, has died. He was 39.

Details are still coming out on his death on February 10, 2022. His passing was confirmed by his girlfriend of many years, Katie Ward, who is known as Atlantis in wrestling.

“Today I lost my best friend, the love of my life my biggest supporter,” posted Ward to Facebook. “I’ll cherish every memory we have had together and just so you know my Shaun that you are the worlds greatest wresting star greatest friend and brother and father and so forth. I am so proud of the courage you had. It takes that to really truly work hard to make it in pro wrestling and everyone I know and you know knows that you did make it! We all know pro wrestling was your dream and having a family. And you have had both of those things and more.” 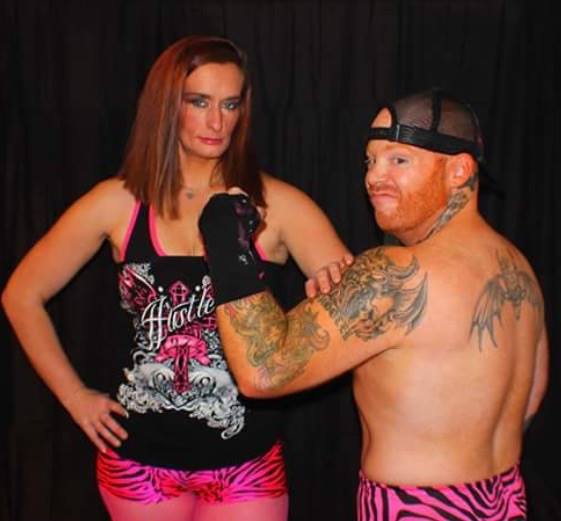 His sister, Wendy Chambers, posted, “I received a phone call from an ER Doctor at Massena Memorial Hospital at 6:07 pm tonight telling me that my baby brother, Shaun Balaban had passed away. We’re awaiting autopsy results. Please pray for my family.”

Diminutive in a land of giants, Shaun Balaban made sure that posts about him exaggerated his height to 6-foot-5, when he was closer to 5-foot-6, and he proclaimed himself “The Largest Man In Pro Wrestling” and “The World’s Largest All-Knighter”, the latter in reference to his friendship with Joey Knight and Robin Knightwing, The All-Knighters, who knew him from the Upstate New York scene. A comedian and actor on occasion, his Twitter feed proclaimed himself the “Greatest Ginger to ever live.”

Born in Massena, New York, on July 31, 1982, Balaban went to Massena Central High School. Pro wrestling was a dream. “It’s just something I always wanted to do as a child. I watched it on TV,” he told the Watertown Daily Times in 2015.

Balaban debuted in pro wrestling in 2001. At various times, he was known as Michael Storm, Anthony Storm, Shooterella, and Shooter Storm.

He did a Ring of Honor tryout, and went to a few WWE shows as an extra. He told the Daily Times that it didn’t work out for a larger role. “They wanted to use me instead of the leprechaun they use now. Because I wasn’t a midget, I didn’t get the job. They gave me a good chunk of change,” he said. In May 2019, he was beaten up by a rampaging Braun Strowman backstage during the WWE Money in the Bank pay-per-view at the XL Center in Hartford, Connecticut. After the appearance, he talked about the appearance with North Country NOW. “I am 36 years old and know the wrestlers now a days are a whole different athlete,” Balaban said. “Do I want to be a full-time part of the WWE roster? Five years ago I would have said 100% absolutely. Now-a-days as an active in ring talent absolutely not … as a manager or ref perhaps, but I love my life with my fiancé Katie.”

To pursue his wrestling dreams, Balaban moved to Florida. In a Facebook post from 2019, Balaban thanked Nick Cvjetkovich — Sinn Bodhi/Kizarny, for helping him out. “[He] gave me my first big break in Florida and helped get me on the map which helped increase the bookings I received for the next 3 plus years. He also gave me my sickest tattoo on my left shoulder.” 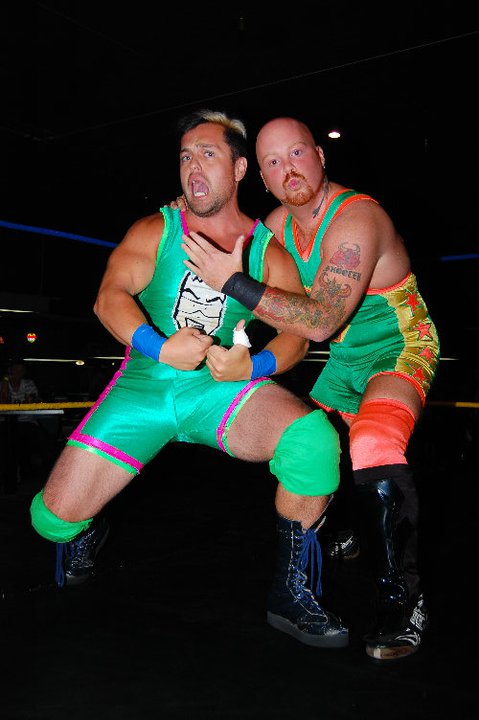 The World’s Largest All Knighters, Joey Knight Carolan and Shooter Storm, in Florida in 2011. Photo by Orlando Macchia

Joey Knight Carolan was one of Balaban’s oldest friends. They’d met in Upstate New York, but reconnected in Florida, as they “kept bumping into each other at different shows.”

“When my tag partner The Sexy Monkey moved out of state, I started doing less shows and was definitely considering stopping altogether but it was Shooter that came up with the idea of tagging and really pushed me to stay in wrestling,” Carolan recalled. “From there on we were wrestling about three nights a week as a tag team for a couple of years straight. Shooter was known for saying things that would get most people knocked out but he always got away with it just by the way he said it. Definitely some of the most fun times I’ve ever had inside the ring and definitely on the road. Non-stop joking and laughing on the long trips!”

Among countless promotions Balaban worked for was Ring Warriors, which had international television distribution. He made the Pro Wrestling Illustrated 500 twice, in 2012 (#486) and 2013 (#460).

In Your Face Wrestling was the name of Balaban’s promotion in and around Massena, and proceeds would often go towards the Alzheimer’s Association of the Northeast, as his mother had died from the disease. Balaban also operated a wrestling school, which opened in 2019.

Balaban posted about the challenges of promoting in 2016:

Running a Wrestling show is tough. Getting the venue, the ring, the setup, music, talent, advertising, sponsors, insurance and the interest in the event. I ran two successful shows in Orlando Florida a few years ago because I busted my ass to get the word out there. I had the help of a few people that had the same passion and drive I did. I have Myzery Barbarian helping me out everyday on this project and the IYFW crew working hard on their end and I appreciate it. This is my baby, this is my brainchild and if it fails I will take full on responsibility for that bc that means I didn’t do my job. The only thing that bothers me is when I have people that message me and say they will help me anyway possible, and then when it comes to needing them to help me get the sponsors, or helping with advertisement they seem to forget how to answer messages . Here’s my bottom line, if you want to help and you say you will help, please help, if you don’t want to help then that’s fine just come to the show and enjoy but don’t say you will do it and then when you are needed be nowhere to be found.

Found out my friend @shooterstorm passed away
This was a show in his HS gym
He was so nervous
I said hey you always wanted to make it in wrestling
Right now you are
Enjoy it#Moments pic.twitter.com/LSEW5M1DZ7

He was also devoted to exposing sex offenders, and would use his social media platforms to post details on registered sex offenders and where they had been living. He had T-shirts made up that said, “F*ck w/ kids? …. Game Over”, “Powerslam the Preds” and “Hey Creepo’s Leave Our Kids Alone.”

For all the battles in ring, Balaban was honest with his own challenges. “I’ve been wrestling a long time but my biggest challenge hasn’t been in the ring, it’s been the battle I have with my depression, and my anxiety. So I guess I am my most feared opponent. Just want to thank people who have done there best to keep me positive and always been there for me,” he posted to Facebook. “I’ve realized I can’t get through it alone so I have taken the advice of these people and am speaking with a specialist. I got to be strong.”

In 2012, Balaban got a chance to appear on The Jerry Springer Show. The premise was that he met a woman at a wrestling show only to learn later that she was, in fact, a man.

“None of it happened,” Balaban told the Daily Times. “In all fairness, when they do call you and try to get you, you make them believe your story’s real. She did a good job on the other side.” 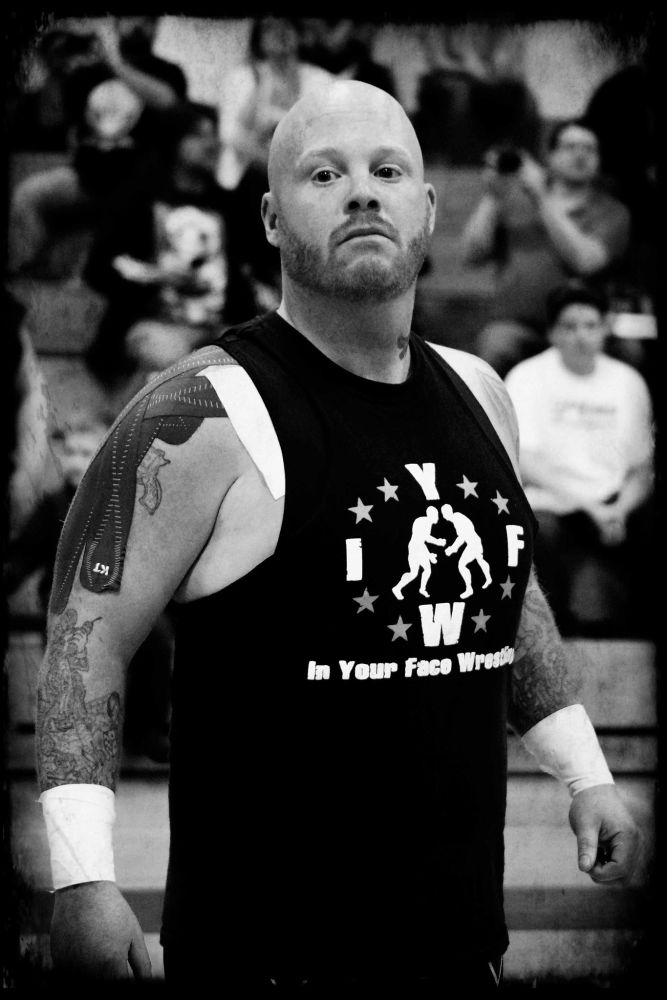 What did happen, through his wrestling days, is that Shooter Storm made plenty of friends, and shared plenty of laughs.

Randy Berry: “Thank you for your services, your larger than life presence, the razzing, the countless laughs we shared, your encouragement, and for dedicating these recent years in exposing evildoers. Your mother would be proud.”

Myzery Barbarian / Jason Davis: “Well I’m still here staring off in space not believing your gone. Shaun Balaban I love you my brother, give your Mother a big hug for me. Goodbye ‘Shooter.'”

Anthony Lewandowski: “RIP Shaun Balaban aka Shooter Storm first met you at world war wrestling you were a good dude. I am in shock hearing this today but I hope you have found peace and are doing only what you can do cutting promos on the angels up stairs. Rest In Power brother”

Jordan Owens: “RIP to Shooter Storm aka Shaun Balaban. I remember him pulling me aside and giving me some good advice that I’ve forwarded to others multiple times since. RIP and my condolences to all his family and friends.”

Eric Mastrocola: “Shocked and saddened to get the news this morning. Shaun helped me a lot by putting me in touch with lots of promoters in the United States. Every time he booked me on show he was always afraid that I wouldn’t be able to cross the border. I will never forget all the boy’s night out at the second floor Burlington VT, ragadang Cornwall and several other places in New York State. He was a very good storyteller. I’ll miss you.”

Greg R Rubadeau: “We danced many times brother… this is perhaps my favorite… you always could make us laugh. God bless you Shaun Balaban. You left an amazing impression on many of us kid. Big love and respect always 🙌🏼❤️☕️🥲 #shooterlove #family”

Justin Cousineau: I have told you hundreds of times in the past, but I loved sharing a locker room with you. Your take no sh*t attitude made you one of a kind. Many, many laughs shared over the years. I’m shocked and saddened to hear of your passing but somehow know you’re looking down on us, cutting a promo on us for being sad. You’d want us to be laughing about all the good times, and you’re probably laughing that we’re all putting you over right now. That’s comforting to me. I can’t think of anybody who lived by their own rules, and lived such a full life doing so, more so than Shooter Storm.”