Former WWE star Andrew “Test” Martin has died at his condo in Tampa Bay, Florida. He was 33 years old.

The Tampa Police Department confirmed the death in the condo, at 725 Harbour Place Drive. According to a release by the police, officials responded after a “neighbor reported that she could see into his apartment through a window and that Mr. Martin appeared motionless for several hours. 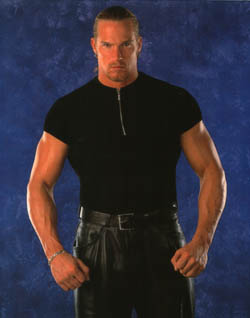 Andrew “Test” Martin in a WWE publicity still from 1999.

“Officers entered the apartment and discovered Mr. Martin to be deceased. At this time there is no indication of foul play. The deceased was transported to the Medical Examiners Office for an autopsy to determine the cause of death. The date of the autopsy is undetermined at this time. The next of kin has been notified of the death.”

Born on March 17, 1975 in Whitby, Ontario, Andrew James Robert Patrick Martin was a big wrestling fan. He worked as a bouncer in various Toronto bars, and learned that after shows at SkyDome, WWE stars would go to Planet Hollywood. His size and demeanor allowed him access to the VIP room, and he met Bret Hart and WWE Canadian president Carl De Marco there.

“To make a long story short, [Hart] offered to train me,” explained Martin to SLAM! Wrestling in Cherry Hill, New Jersey at the NWA 50th Anniversary show in 1998. “Two weeks later I quit both my jobs, went down for eight months. He and Leo Burke trained myself and a few other Canadian guys — Glenn Kulka, Adam Copeland [Edge] was there, Jay Reso [Christian]. The four of us trained together and it was a good experience. He was very good to me.”

The six-foot-six, 320-pound Martin spent very little time on the indy circuit — primarily around the Canadian prairies as T.J. Thunder and Martin Kane — before landing a WWE deal.

After a stint furthering his learning at Dory Funk Jr.’s Funking Dojo, Martin first appeared on Sunday Night Heat as a roadie for Motley Crue on October 25, 1998. Up next would be serving as a bodyguard to The Rock and the rest of Vince McMahon’s “Corporation.”

Martin’s biggest angle was his courtship and almost marriage to Stephanie McMahon, only to be thwarted at the altar by Triple H, who had already married her. Instead of a logical, heated feud against Triple H, Test was pushed aside and never truly landed a role as high profile again in the company.

His next big break came in the tag team T&A, as “Test”, teaming with Albert (now Giant Bernard in Japan, real name Matt Bloom) with fellow Torontonian Trish Stratus as their manager. They never ascended to the top of the tag team ranks, but were a solid pairing.

February 2007 was Martin’s last appearance for WWE; he was released after failing a drug test. Martin made a few appearances for TNA as “The Punisher” Andrew Martin, but was never hired under contract.

During his WWE days, Martin won numerous titles, including the Intercontinental, Hardcore and European singles belts, and WWF and WCW tag team titles with Booker T.

He announced publicly that he was retiring from pro wrestling in December 2007 on his MySpace site, but he made occasional appearances, particularly overseas up until a month ago.

“They say nobody retires from wrestling. I can’t tell you how much I hate to hear guys say ‘it’s all I know’ and keep working long after they should and die or be permanently [sic] disabled,” Martin wrote on MySpace. “You have to come to terms when you ask yourself what is your health worth? To me? You can’t put a price on it! So what are you wrestling for? One man’s greed so he might throw you a bone? I loved wrestling, it was good to me. I’m still young, I’m in the shape of my life I’ve got some money tucked away. I never got into wrestling to be rich and famous.”

He also pontificated on the reasons he never became a bigger star in the same post.

“I was told my problem was I never ‘kissed enough ass.’ As we all know wrestling is not real and it is very political backstage and as a man I could never bring myself to consort with the people that I didn’t care for even if that meant making less money and not getting a world title. The world title is not real but my dignity was and I feel I never compromised it. I said ‘no’ to Vince a few times which I was told is unheard of and the kiss of death. I personally don’t have bad things to say about Vince. I can appreciate what he’s done! I wonder what it’s like to have everyone who works for you tell you yes and your ideas are great because they are terrified about losing their job. I will never know nor do I want to.”

In April 2007, the Maryland State Athletic Commission wouldn’t allow Test to wrestle in a match for Maryland Championship Wrestling.

In April 2008, Martin was arrested for Driving Under the Influence of alcohol and driving with a suspended license in Tampa, Florida one year ago. He was brought to the Land O’ Lakes Jail where he posted $500 bail.

Away from the ring, Martin was well known for dating WWE “divas” Stacy Keibler and Kelly Kelly (Barbie Blank).

Martin was four days shy of his 34th birthday.

Further details will be forthcoming on his passing and funeral arrangements.