The parents of Andrew “Test” Martin thought that their son had turned a corner in his life. He’d been through rehab and signed up for a course in personal training for April.

“He was putting a real fight up. He did that,” Bob Martin told SLAM! Wrestling Sunday. “He was here at Christmas, and he was just great and we had a great time. January, February, March, he phoned. We had great chats about a lot of things. He knew it was going to be a struggle with him forever but he was willing to do it.” 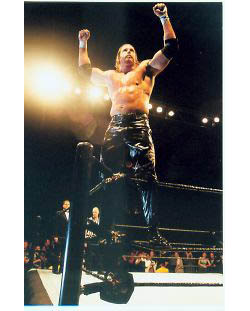 “Test” Andrew Martin caught in a spotlight as he strikes a pose. Photo by Mike Lano, [email protected]

In August 2008, Andrew Martin entered the Hanley Center rehabilitation facility in West Palm Beach, Florida, for treatment. The several-week stay was paid for by his former employer, World Wrestling Entertainment.

He completed the program successfully, according to a blog entry by WWE announcer Jim Ross, who initially hired Test, “Andrew successfully completed the WWE-funded program and was highly regarded by the Hanley Center with being such an asset to them after completing the program of which Andrew took seriously, according to the facility. Since being released from the facility after successfully completing the program, Andrew had been doing well in his 12 Step AA program and was in contact with WWE with regular phone calls.”

In an interview with writer Jeff Wilen, Kevin Nash, who helped get Test into rehab, also said he was doing well. “I helped him get into rehab. WWE picked up the dollar and helped him through rehab. Andrew went in. He was doing really well, making his meetings,” Nash said, adding later that, “[t]he combination of muscle relaxers and pain pills are lethal.”

Bob Martin said that he and his wife knew some of the battles their son was going through, but not all. “He kept a lot of it to himself, but we knew some of it,” he said. “That’s the way it is [in wrestling].”

He also stressed that no one knows the cause of death yet.

“There has been an autopsy. There was no trauma to his body, no one had tried to kill him or anything like that,” Martin said. “We don’t know what happened. I guess we’ll never know. He was actually going to France [Monday] to wrestle.”

Test had been in regular touch with family.

“We had been talking to him. His sister had been talking to him on Monday. Another friend sent him an e-mail on Tuesday,” said his father. “We were away at my daughter’s, and we came back. We had phoned him, but he hadn’t answered back. But that was just Tuesday we came home, and he hadn’t answered back. We thought he was maybe away with his friends or something like that. We never thought about it.”

When told that Leo Burke, who trained his son for pro wrestling, noted to SLAM! Wresting that that he’d recently gotten a call from Andrew saying thanks for training him, Bob Martin welled up. “He was always thanking me, his mother.”

The Martins, who live in Whitby (about 30 minutes outside Toronto), were always supportive of their son’s career.

“He wanted to do it and he thought that was great,” said Bob Martin.

The dedication to his physique was always there. “That was one thing he did, he worked out every day,” he said.

Next month, Andrew Martin was set to change direction in his career, said his father. “He had applied to take a course as a personal trainer beginning in April. He thought that was maybe the route to go. Of course, he never got the chance to try that.”

Funeral arrangements are still being made, with an announcement to come as an obituary in the Toronto Star this week, probably on Wednesday or Thursday.