While writing yet another obituary that should not have to have been written so early in someone’s life, I was surprised to learn often I had interviewed “Test” Andrew Martin during the initial years of his career.

Is it a condemnation of me for not remembering some of the interviews? Or the fact that I have done so many? 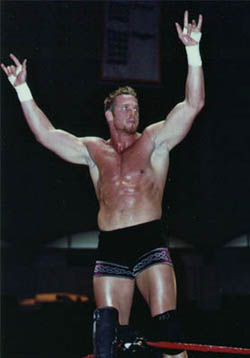 Test plays to the crowd. Photo by Steven Johnson.

Or is it just the general blandness of Andrew Martin himself? Perhaps that sounds cold a few days after his death, but it also speaks to his in-ring character and persona, which just never really hit the heights that many thought — given his look and physique — that he should have.

I can remember very vividly our first meeting though. It was the NWA 50th Anniversary convention and wrestling show in Cherry Hill, NJ in 1998. Martin was in attendance as a part of Dory Funk Jr.’s now storied Funkin’ Dojo class, there to work in a battle royal on the card in the hotel ballroom. Others I was privvy to seeing at a young age in that same match were Kurt Angle, Teddy Hart, Tiger Ali Singh, Giant Silva, Glenn Kulka and Christopher Daniels.

My patriotism, I guess, led me to Martin, who was ripped and imposing in a Molson Canadian tank top.

He was soft-spoken and polite, not a braggart by any means. His voice is low and somewhat scruffy, like we all heard on TV over the years. We talked a lot about how he got started. It’s a great story actually. Martin was a Whitby, Ontario, wrestling fan who sculpted by body and was so physically imposing (6-foot-6, 320 pounds at his peak) that he was able to pass himself off as a wrestler to security at the Planet Hollywood restaurant at SkyDome in Toronto, and enter the V.I.P. Section where the WWF stars were hanging out after a show.

That obviously took guts, and clearly demonstrated his desire to become a wrestler. Yes, he was asked to leave, but he did meet WWE Canadian president Carl De Marco, who introduced him to Bret Hart. The Hitman and Martin hit it off, and he was invited to train at Bret’s house in Calgary.

The other two interviews from 1999 seem rather vague, and I’m pretty sure they both happened at the same time, in the conference room for Viewers Choice Canada in downtown Toronto. The photos from the March 25, 1999 story, Canadian contingent psyched for WM15, tell perhaps more of a tale than the story itself. Edge, Christian and Val Venis seem to be having a great time, goofing around, and Martin is just a notch or two below them in the fun quotient.

The April 6, 1999 article, Test: I’m no Diesel wannabe, I seem to remember a little more, probably because I’d been kibitzing in the office with John Powell or Stephen Laroche about what to ask Test, whose career had only just started.

The comparisons to Kevin Nash were natural. Both were huge men with somewhat limited repertoires, at least compared to the emerging trend of high-flyers. To Martin’s credit, he definitely progressed over the years, yet never found that magic touch, that hint of charisma mixed with the mysterious formula that puts a name at the top of the card.

My files are full of stories about wrestlers, and I do my best to cross-reference so I can grab quick quotes about somebody should one be needed. Yet there was little on Martin.

Again, it was like he slipped through the radar. He wasn’t interviewed that much, and people didn’t talk about him.

So I was surprised to see an interview with Kevin Nash after Martin’s death, talking about how they were such close friends. In an chat with writer Jeff Wilen, Nash said that Martin was in his top 10 of friends in the industry. “We were really close. I helped him get into rehab. WWE picked up the dollar and helped him through rehab. Andrew went in. He was doing really well, making his meetings,” Nash told Wilen. “He was a great guy. I kind of looked at him like a little brother. I considered him one of my better friends.”

But the real haunting one is Liam Phillips’ clip from his upcoming movie The Circus. I’ve known Liam for a few years, and he has written a story or two for SLAM! Wrestling and I was interviewed for the film, which has been in the works for a few years now.

“The sudden passing of Andrew Martin is of course a big shock to anyone who’s followed the sport. But in my case, I was taken aback of this news because of what he’d told me. I’d interviewed him for my documentary, The Circus, only a year before — a film which examines the epidemic of premature deaths in wrestling. At the time, Andrew had just suffered the loss of a friend in Brian ‘Crush’ Adams, but understood the pitfalls of the wrestling business and why the problem seems to be getting worse,” Phillips recalled in an email.

“Andrew was open about everything and especially when speaking about his fears of joining the ever-expanding list of deceased wrestlers. This fear comes across in the documentary and is chilling to hear in the aftershock of his death. I immediately felt it was important for his message to be heard, and I think it will reach more people because they will consider the source.

“Andrew spoke from experience and had lost many close friends in the last few years, so it is my hope that everyone involved in the business takes the time to hear his message. When the upcoming documentary is released, I am certain that his words of caution will not go unheard.”

The aforementioned clip is quite moving, and perhaps unlike my own experiences talking to Martin, it will have a lasting impression: