The World Wrestling Federation is getting into a higher gear in Canada.

A joint venture with Castrol was announced at the Canadian International Autoshow at the Metro Toronto Convention Centre this week. 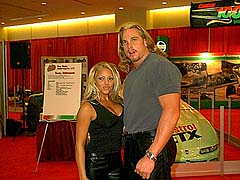 WWF Canada President Carl DeMarco, along with Castrol president Michael Birch, made the announcement, with WWF stars Test and Trish Stratus in tow. The deal concerns a new marketing/advertising venture in which product pairings would be the theme.

DeMarco and Birch said their respective companies have similar demographics, so a promotional union made sense, especially because both their U.S. counterparts already have had a deal in place for over a year.

One of their first joint ventures involves the Speedy Muffler chain, in which people going to Speedy for an oil change will receive a free poster of a WWF superstar. Other promotions will follow, including something that will take place around Wrestlemania 2000.

On hand to give out autographs, Test and Stratus took time out from pressing flesh to answer a few questions, including why Test hadn’t been on TV lately, as well as the status of his hardcore title.

“[The belt]’s at home resting, kind of like my back right now,” explained Test (Andrew Martin). “I’ve just been off the past two weeks with a back injury. I got the back injury from winning the hardcore title.”

Many wrestling fans also wondered why his featured feud with the McMahon-Helmsley era ended so swiftly, something which Test admits he doesn’t really know the answer to.

“To be honest with you I don’t really know. I’m not one of the writers, and I don’t write the story. But it freed her up to do something else, and it moves me on to do my own thing, so it’s great. The whole experience, the whole storyline worked out great for both of us, and I’m sure as soon as I get back in good health it will lead to more things.”

He says if the fans want the feud to continue, then they will dictate most of his future plans, until then, he’s enjoying his status as hardcore champion, even if the comparisons with Kevin Nash and their similar in-ring styles continue to persist.

“It doesn’t bother me at all,” said Test. “People make comparisons to me and Kevin Nash all the time, and if my success is only as good as Kevin Nash’s then I’m happy. I mean, the guy has done tremendously in the business, and I don’t take that as an insult.”

Test’s appearance with Trish Stratus is not a precursor to any storyline at the moment, but she was also on hand to tell us about her status with the wrestling company, because although she has signed a contract, a work visa for the U.S. has not been granted yet.

“I wish I knew (what’s going on with the visa),” said Stratus. “It’s really just a process thing. It’ll get processed, then I’ll get it, then I’ll start.”

Stratus admits she’s anticipating her debut soon, and is getting prepared to make an impact right away, although until visa problems are worked out, it’s too soon to say what angle she’ll be involved in.

“I’ve been training, so I’m ready and willing to go into the ring. I don’t know if they’ll bring me in specifically for that purpose, but as far as angles, it’ll depend on the storylines that are currently going on, and where it’ll mesh me in. I won’t know until my visa’s processed. We’ve thrown some ideas about.”

As for what may occur, the WWF is considered by some to have controversial content revolving woman, but Stratus said she doesn’t have a problem with doing what’s necessary to push her character.

“I think controversy is created in the eyes of the beholder,” said Stratus. “I believe that I’m going in there as an actress, I’m going to assume a role, and do my job to assume that role completely. Psychology wise, everything I can do to do that role completely, I will, and when I leave the arena that night, I’m Trish again. Whatever I do in the ring, is just part of my job.”

Stratus said she’s also prepared for whatever awaits her physically in the squared circle.

“My training is going excellent. I basically can do every move, it’s just a matter of learning to call a match, which is something that comes with experience. I’ll be working a few matches here in Toronto, and really getting a feel for calling a match. There’s a lot of psychology to a match, and it’s really an experience thing.”