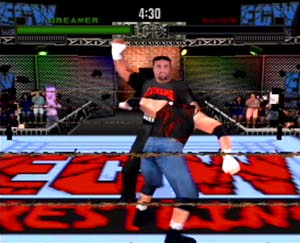 Tommy Dreamer goes to work in the N64 version of ECW Hardcore Revolution.

Tommy Dreamer, ‘The Innovator of Violence’, is very happy with Acclaim’s new wrestling video game, ECW Hardcore Revolution (out this Thursday) and with Acclaim sports as a whole.

“Acclaim has done nothing but make every single person in ECW who never had a taste of ‘the big time’ feel like they were something…they all got input into the game,” says Dreamer.

The level of detail that some of the wrestlers asked for in their characters was happily supplied by Acclaim. “Some of the guys tape their fingers…to hide their wedding rings, they got that in.”

Getting the ECW Hardcore Revolution game into the stores was a labour of love for Dreamer. “One of my two big dreams in wrestling,” he says, “was to be in a video game, and to wrestle at MSG [Madison Square Gardens]. At least I got this one.” 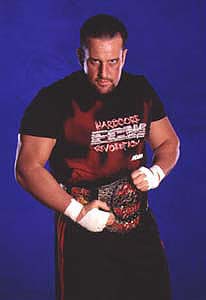 Tommy had a very hands-on style in the game, especially in the case of who got into the game. One name is a real surprise — Louie Spicolli, who made a real name for himself in ECW before moving on to WCW just before his untimely passing.

“Louie was a friend of mine,” Tommy explains. “I miss him. I called up his sister if she would like [to have him in the game] and she started crying. She said between me and Rob Van Dam, we were the only people keeping him alive. She didn’t want money, I said I’d do my best, and Acclaim did nothing but make him look great.”

“We were gonna do a ‘legends of ECW’ section,” he continues. “We were gonna have Terry Funk, Rick Rude…it all came down to a matter of legal stuff. Plus you don’t want to come off looking like you’re trying to make money off these guys.”

Still, there’s a few unexpected names in the game – in addition to the current roster, there’s a few names from the past – Beulah McGillicutty is back, as is Sabu’s uncle, the legendary Sheik.

“The Sheik, we got through Sabu, and I called Beulah and got her permission. That was something she really wanted. I also put a few of his friends into the game.” (Several of the jobbers, along with the sound guy and the ECW nurse.) “If I could give my friends a taste of the good life that I’ve had, I’m gonna put it in.”

Tommy is very proud of this game, because he’s the one that got the deal with Acclaim in the first place. And as a result, ECW has a very unique relationship with their video game maker — Acclaim actually acquired a piece of the company, making the mutual success of the game and the company all the more beneficial. Is he afraid that a big company like Acclaim might try to make changes in the house that hardcore built?

“They have no creative control,” Tommy assures. “A long time ago, Vince McMahon offered to help ECW…Paul [Heyman, AKA Paul E. Dangerously] said no. This is Paul’s project; he would never give up an ounce of creative control.”

“I’ve said it before: ECW changed the face of pro wrestling. The WWF has made millions off it. We’re starting to make our millions on it. Paul probably could have done it a lot sooner if he had changed, had changed the company. And it’s a credit to him [that he didn’t]. We’ve been the Howard Stern of pro wrestling. I mean, look at Andrew ‘Dice’ Clay: He changed his act, and his career went dead. This is Paul’s vision, this is what he wants, and it’s obviously worked, because look how mainstream pro wrestling is now.”

Taz is still in the game, as are a few wrestlers that have left the company since their footage was motion captured. Was there ever a thought to take him out? Tommy’s answer was without hesitation. “No. Taz deserves to be in this game. Taz played an important role in this company. I wish the Dudleys could have been in the game, but they weren’t under contract at the time, and it would’ve been a legal hassle.”

As one of the last founding members from the beginning of ECW (“last man standing” as he calls it) he says he’s glad he stuck it out with Paul E. “Every person on the roster had the right to leave, and I stayed. I’m happy, I make a lot of money…if it says on the tombstone of Tommy Dreamer, ‘ECW’…that would be cool.

Looking ahead, what would Tommy like to see in the next game, already being worked on and due out in the summer?

“I’d like to see Terry Funk in it. I’d would love, and I would do it myself, to have a ladder match, but they tell me that’s not possible with the current level of technology. They tell me the ladder has to act as an actual figure, a player, and that’s not possible. I would like to see more interaction, like the move where Rob Van Dam throws a chair, the other guy catches it; more stuff than just hitting a guy.”