Canadian Lightning strikes with a Fury in the AWF 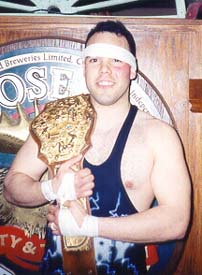 The Toronto based Sully’s Gym has a reputation of supplying some of the best indy wrestlers in Canada. Jim Fury is no exception. Fury, real name James King, was bitten by the wrestling bug at an early age and would stop at nothing to obtain his goal. Now, at 26, he has achieved his goal and now wants more.

“I’ve watched wrestling ever since I was a kid, so you could say it was a childhood dream. It looked so dramatic and exciting,” said the 200-pound Fury, whose nickname is Canadian Lightning. “I’m happy doing what I’m doing, just wish I could break out of this losing slump and be on my way to some championship gold.”

The gold that he’s referring to is the Apocalypse Wrestling Federation heavyweight title, a belt Fury says he was “screwed” out of on his very first defense. Still, losing the title in his hometown of St. Catharines sticks out as the biggest moment of his career.

“My favorite [wrestling] moment was walking out to the ring on that show and hearing the deafening cheers and seeing how proud my wife and son were of me … it was the biggest crowd ever for the AWF,” said Fury.

It hasn’t always been cheering fans and championship belts for Fury. He recounts a western wrestling road trip that almost crushed his hopes of stepping into the ring. A trip that puts the reality of the wrestling business into perspective.

“When I think back, I think it was because I didn’t realize the reality of the long hours of traveling and the weather [in Winnipeg] had to be the worst winter I’ve seen. The roads were never plowed and the temperatures averaged -21° C, -30° C on a daily basis. I was usually alone because the few guys I did know were hardly around. You have to remember, I had just had my first match a few weeks before so I didn’t know nothing about the business and I was in a strange place. More so than that, traveling costs money, sometimes a lot. At the time I was only working at a fast food joint so I couldn’t afford to go anywhere. I was paying bills and struggling financially.

“I knew that if I didn’t go on this trip, I’d probably never see my dream come true. There were no promotions in my area and they were all so far away. After that Winnipeg trip, I thought that was it. Time had passed and I believed my wrestling career was over. One day I got a call from Ron [Hutchison] about working for the EWF. After missing a few shows because of work, I got the chance.”

Hutchison became Fury’s first wrestling instructor after he had spotted an add for Sully’s Gym in a wrestling magazine.

“I was looking in a [magazine] that had a list of schools and found Sweet Daddy Siki’s school. After one visit and one year of getting over my fears, I joined. Siki had retired and Ron Hutchison was running the show.”

During his time at Sully’s Gym, Fury trained with some pretty big names, however he doesn’t feel like he needs to live up to their success. Instead, he talks about how the stars involvement helps spread the name of the training centre.

“It’s pretty cool knowing that the school I went to produced some top stars in the WWF and WCW. You should see some people’s reactions when you tell them that not only do you know Edge and Christian, but trained with them as well. A lot of people ask if you know guys like that. Another thing is that it’s in Canada which makes it look even better, world wise that is. As far as pressure, none, not from me anyway. At one time I wanted that fame to fall into my lap but now it doesn’t matter.”

When asked where he wants wrestling to take him, his answer is so down to earth it’s shocking.

“As far as my wrestling career, I don’t see myself going to the WWF or WCW. I honestly don’t think I’ll go any further than the AWF. There’s nothing wrong with that because I’m happy just wrestling for them, they’re great. With the way wrestling is today, I don’t know if I’d want a career with the ‘big boys’. Maybe one or two matches on television would be nice but who knows. Wrestling, and the people involved have been good to me and I’ve already achieved championship status. That’s something I’ve dreamed about all my life, it didn’t matter about the title but the chance to win one. In closing, I would love another shot at the AWF strap and actually win it in a hard fought match and then not get screwed out of it in my first title defense.”

If he keeps wrestling the way he is now, ‘Canadian Lightning’ will once again strike the top of the AWF.