“They can say what they want, but there’s no comparison between myself and Diesel, aka Kevin Nash,” Test, aka Andrew Martin, said at a WWF press event in Toronto to hype WrestleMania. “I think I’m twenty years younger and it’s a whole new style, it’s a whole different generation. Test is Test. Kevin Nash is Kevin Nash.”

The Whitby, Ontario native is really enjoying his role in The Corporation and the WWF. 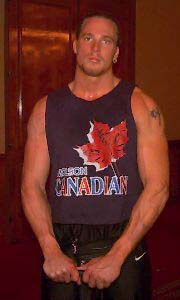 “It’s been great,” he said. “It’s been a great experience getting to see a lot of places I’d never thought I’d see.”

Like The Rock says, Test knows his role at the moment, and it isn’t in the spotlight at the top of cards, though he did get into WrestleMania in a tag title match with D’Lo Brown against Owen Hart & Jeff Jarrett.

“My role is as the insurance policy,” he explained. “I’m busy looking after the rest of the guys, making sure everything runs okay. I’m there to watch their backs, they’re there to watch mine.”

All The Corporation members have been good to him, helping him learn more about the wrestling game, he said. Except one. “Kane, Kane doesn’t have too much to say,” he laughed.

There wasn’t any initiation for the 6-foot-6-inch giant when he reached the bigs.

“It’s not like hockey or football or anything like that. You don’t get your head shaved, or other things,” he said. “The guys are pretty good.”

Regular fans of the WWF will know that Test hasn’t exactly set the world on fire with his matches, most of which end in a DQ or some other non-finish. Test brushed off that comment. “I haven’t lost too many matches on TV neither.”