Happy Humphrey was the giant

In the past year, Paul Wight (aka The Giant) and Kevin Nash have both claimed to be the true giant of wrestling. The WWF claims that Andre the Giant was their giant in the ring. Depending on the generation of the person listening and watching, any of them could be right.

True wrestling fans would probably point to Haystacks Calhoun from the 1950s and 1960s. Calhoun’s 600 plus pound frame was always looked at as the biggest of any generation to step in the ring, but even Calhoun had trouble when he faced 800 pound plus Happy Humphrey.

Happy Humphrey, whose real name was William Cobb, wrestled most of his career in the 700 pound range, but he often measured at 800 pounds or more. Promoters of Humphrey had a special car built that could hold the big man. Seats were taken out, and extra shocks were installed.

One popular stop for the car was at a meat factory. There Humphrey would be placed on a meat scale to measure his true weight. Often promoters were worried about how well the ring would stand up to the weight of Humphrey. 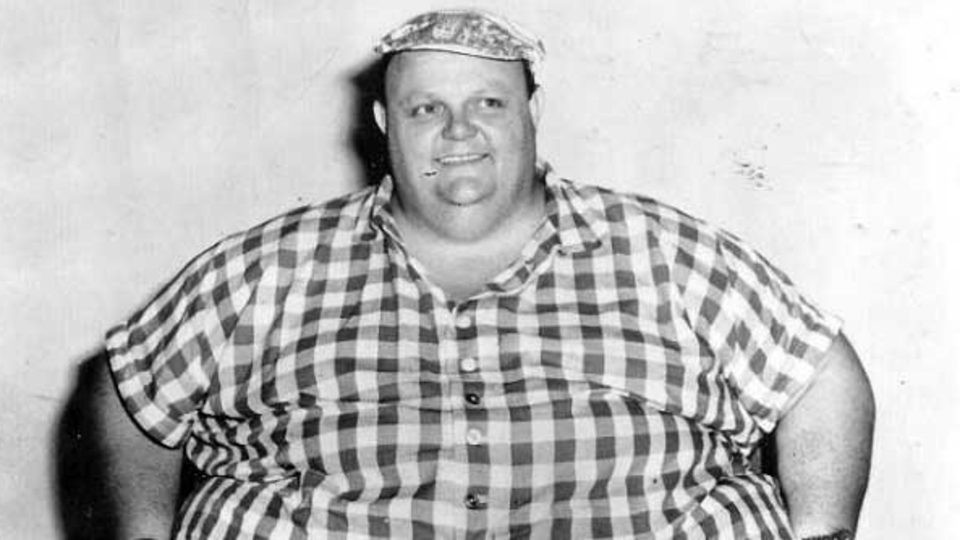 Haystacks Calhoun remembered seeing the structure of Humphrey. He said, “When I wrestled Happy he weighed about 700 pounds, but I could see as soon as we squared off that he was a fat 700 pounds. He had very poor balance, was easy to around and easy to handle. I slammed him easier than the average-size fellow. When I learned he was up to 800 pounds I warned him that it wasn’t healthy.”

Humphrey had a difficult time no matter where he went. He was often starred at, and service at restaurants was not offered to him because of his size. Once in Alabama, it took eight police officers to get him out of a phone booth. Another time in New Orleans, LA, Humphrey became jammed in a movie theater seat. Local police and a few welders had to cut the seats around Humphrey to get him out.

Humphrey seemed destined for wrestling when he wrestled a bear for 28 minutes in 1953. He worked on a farm, and his strength seemed better than most men. It seemed he could build his life around wrestling.

Humphrey wrestled for about eight years before realizing he had a problem. He had surgery to remove some 100 pounds of fat from his body, but the weight was soon gained back.

It was not until 1962 that Humphrey had no other choice. Humphrey was confined to a bed and could not move. He tried a few times to walk with a cane, but he often tired before getting across the room.

Humphrey looked for help. He became a test of the Medical College of Georgia. He was placed on a close diet, and his goal was to lose some 600 pounds. It was no more 18 pound sittings, as once attempted.

Two years had past, and Humphrey had been weighed in at 230 pounds. He had lost an estimated 630 pounds during the diet.

Humphrey realized that he was not going to be able to return to wrestling with his new size. He was learning things he could not do before. Sitting a chair and crossing his legs was something incredible to Humphrey. He just wanted to resume a normal life.

“Wrestling was good to me, and I miss being in there and mixing it up, ” Humphrey said after. “It’s a sport for tough men, and I loved it.”