It’s been more than a week since the unexpected passing of Andrew “Test” Martin, and his friends and former co-workers are still trying to come to grips with his death.

In this era of blogs and MySpace postings, many wrestlers have chosen to carefully script their words of remembrance and longing. Particularly moving are the words of WWE diva Kelly Kelly (Barbie Blank), who dated Martin up until recently. 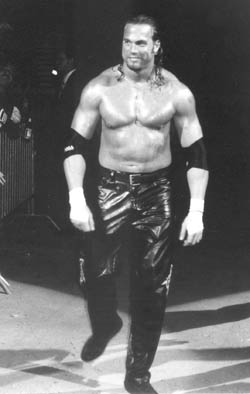 Test heads to the ring. Photo by Mike Lano, WReaLano@aol.com

“You were my world … my best friend the one I always ran to … You were always there for me … what happened to our plan …Why did God take you away from me … my heart is always with you and you only … I know you’re in heaven watching over me now my angel …” she wrote on her MySpace site.

In conversation on the phone, it isn’t always as easy to eulogize a friend, said former WWE referee Jim Korderas.

“Trying to find words when something like this happens is hard,” Korderas said. “He’s young, 33, almost 34 years old. That’s too young.

“I always got along great with him. He was a good guy. He liked what he was doing, you know what I mean?”

“I don’t know what happened, but Test was a good guy,” recalled Hebner. “He was an average wrestler who really got in the ring and put everything he had into it. I think he could have been better if they gave him a nice big push to do something different with him to make him a champion like that. Test always went to the ring and gave nothing but his best.”

Hebner said that Martin got along with everybody in the locker room, and was particularly close to Val Venis and the late Curt Hennig. “He liked to kid around in the back, he was just a good natured person,” he said, offering a story of Martin’s calm nature.

“I remember he took a hard shot one night — right in the mouth with that belt. I know he came back in the dressing room; boy he was fit to be tied. I know that lip was out there like a thumb. They had to go and sew it up and everything. Now that’s when somebody gets really mad, when something goes wrong that’s not supposed to go. But he took it like a man. Right after he was mad, but then he’d come right back and get his senses and ask, ‘Well, where was the mistake?’ and, ‘No big deal.’”

The wrestlers themselves often form a tight fraternity, and their own families are often drawn into the mix. Two of Martin’s best friends were Matt Bloom (A-Train, Giant Bernand) and Sean Morley (Val Venis). Bloom’s father, Mike, who winters in Florida, got a visit from Martin just a week before his death.

“I’m right near where Andrew was living. That’s why he drove out to see me a week before he passed. We met, we talked,” said Mike Bloom, who dispelled any notion that Martin hadn’t gotten a handle on his personal issues. “He’d cleaned up. He was pretty straight. He looked great. His body looked good, his mind was sound. He was good. He talked about his father and stuff, just about his family. … he was speaking clearly when I saw him.” 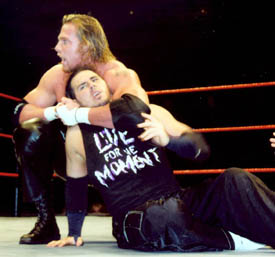 Test has a headlock on Matt Hardy. Photo by Mike Lano, WReaLano@aol.com

On his website, Hart wrote about meeting Martin in 1996 and inviting him to train with him. “I wasn’t actually looking for any more prospects but I saw something in him and told him if he could get over to Calgary I’d personally teach him, free of charge,” wrote Hart, detailing some of the grappling they did in the basement of his home — when he was actually home from the grueling WWE schedule.

It was actually Leo Burke who was the primary trainer for the students in Hart’s basement. Burke recalled that Martin came to Calgary with another raw rookie, whose name he couldn’t recall. “They both came down together. They were green. They had nothing, never done nothing as far as wrestling goes. I started them from Day One, hammerlocks, just showing them how to lock up, anything,” Burke told SLAM! Wrestling. “To make a long story short, they were super guys and I sent them to whomever was training then for the WWF.”

Martin was “very cooperative” said Burke. “They showed a lot of respect, and that was good enough for me. Test, he had a lot of potential. He was on steroids, probably. He put on the weight after. It doesn’t come on its own.”

Cozman worked Martin’s very early matches in Saskatchewan. “Andy was a pleasure to work with and a very competent worker. I trained with Andy when he was in Calgary training with Leo Burke,” Cozman recalled. “Bob Leonard gave the name of TJ Thunder to Andy when he worked in Regina. Andy had his second and third match of his career with me in Regina (the third match was a triple threat match with myself, Andy and Leo Burke).”

According to both Hart and Burke, Martin never forgot who helped him along the way. Hart kept in touch as best he could, encouraging Martin to battle his demons. “I smile at the memory of his deep booming laugh echoing over the phone,” wrote Hart. “That’s how I choose to remember my friend. I’m sorry I didn’t see his pain and suffering; had I known I’d have tried harder to save him. He slipped and we lost one of the good ones.”

Burke had recently heard from Martin as well. “He called maybe two months ago or so, just to thank me for helping him out.”

FUNERAL POSTING
MARTIN, Andrew James Robert Patrick – Suddenly at his home in Tampa Bay, Florida on March 13, 2009. Beloved son of Robert and Margaret (Frost) Martin. Brother of Michael and Abby (Leab) Martin and Nancy and Rob Farmer. Uncle of Madeleine (Maddie) Martin and William, Cora and Lucy Martin-Farmer. Nephew of Marion Martin, Catherine Frost, Margaret and Verne Miller, Archie and Sharon (Willis) Martin, Douglas and Joyce Cyr, and Phyllis and Ken Salmon. Andrew spent most of his working career as a professional wrestler under the name of Test. A memorial service will be held at All Saints’ Anglican Church, Dundas St. W., Whitby, Ontario at a later date.