On the official WrestleMania 15 card, you won’t find Edge, Christian or Test’s names. But they all insist you’ll be seeing them on the pay-per-view.

The Brood’s Edge and Christian both expect to be on Sunday Night Heat just before the big show, likely in the tag team battle royal. And likely more.

“I’ll be making an appearance [at WM15], though I can’t give that away,” Edge said cryptically, who last week “popped out three ribs” in Las Vegas. 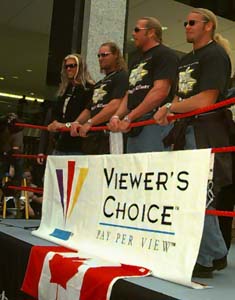 The Orangeville, Ontario native claimed not to be too excited at this moment about his WrestleMania debut.

“I think I will be more (excited) the night of (WrestleMania),” he said. “I never really get psyched up before hand. Right before you go out the butterflies will sink in. I’ve grown up watching it, so to finally be involved in it is a cool thing.”

“I’m excited because this is what I’ve been dreaming about since I was a kid,” he explained.

Test also promised that he will be appearing on the big show, perhaps even with The Big Show Paul Wight.

“[I’m] not officially involved, but you keep your eyes open,” Test said. “I’m sure you’ll see me out there at one time or another.”

The three Toronto-area WWFers were at the WWF/Viewer’s Choice WrestleMania Challenge at BCE Place in downtown Toronto on Thursday. Fans were encouraged to come out and get a free autograph in exchange for their donation to the Daily Bread Food Bank. About a thousand fans jammed into the BCE Place atrium, and 2,300 pounds of food were collected, including a donation from Kraft Foods.

Missing from the local mix was Tiger Ali Singh, who lives just outside Toronto.

When asked on the whereabouts of Tiger, Test joked: “I don’t know where Tiger is. I guess he’s off trying to get some peasant to lick his toes for 500 clams.”

— with files from Kevin Nielsen