Whenever you conjure up thoughts of Kentucky, you naturally think of bluegrass and horse races. But if you also think of Kentuckians as men with fighting spirits, the name Doug Kinslow may very well ring a bell. 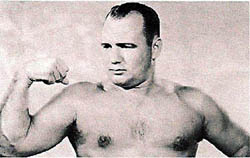 In an era when men of the mat had a quiet resolve and steely determination about them, wrestlers like Kinslow anxiously sprang from the starting gate to make their mark in the wrestling world.

Doug first saw the light of day in Louisville, Kentucky in 1932. The city that is home to the Kentucky Derby and the Louisville Slugger baseball bat has produced many fine athletes including its most famous son, Muhammad Ali, who captivated the boxing world.

Kinslow started his career as a boxer in the 1950s, turning pro under the guidance of local wrestler Stu Gibson. Fighting in the middleweight division, Doug had 39 pro fights, winning 36 and losing 3. He gained a respected reputation as a boxer. One of his cherished moments is appearing on a card headlined by Heavyweight Champion Jersey Joe Walcott.

Since Gibson was a well-known boxer and wrestler around Louisville, it was a given that Kinslow was also aware of the opportunities in the wrestling side of the ring equation.

“Pro wrestling was doing great in the 1950s.” Kinslow explains. “There was money to be made and frankly I believed that I could earn more money as a pro wrestler. I started working with Stu and then later in San Antonio, Wee Willie Davis and a policeman named Buck Moore trained me.”

Davis was not only a proficient wrestler in the past but also an accomplished movie actor. He took Kinslow under his wing and soon Doug was on the mat as a wrestler in 1958. It was the beginning of a career that would last 20 years. During that time he worked in 25 States for numerous promoters.

He spent time in Arizona where he worked for Monte LaDue who he says was a good promoter. But there was considerable distance to travel between towns and the money was not the best. He nonetheless worked in Phoenix, Tuscon, Mesa and Snowflake. 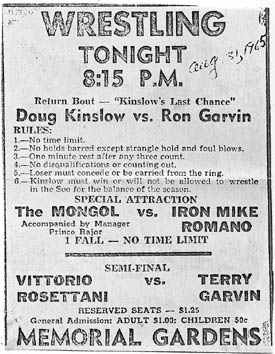 Once when he worked in Missouri, he was surprised to learn upon his arrival in one of the towns that the promoter had billed him as Dick Light.

“It didn’t make much difference to me,” Doug says philosophically, “as long as they paid me.”

In Alabama, he turned heel and enjoyed the change of pace as it afforded him the chance to be the aggressor. He also met Dick Dunn who became a great friend.

“We remained friends over the years. After he retired, he’d come up to Louisville to visit me every couple of years and I’d go down to Alabama once in awhile. He passed away a couple of years ago.”

As he broadened his horizons, Kinslow came in touch with many great wrestlers. He liked George and Sandy Scott as a team as well as Jerry and Eddie Graham and the team of Gypsy Joe and Jan Madrid. Doug also worked for Eddie Graham and Cowboy Luttrell in Florida and for Nick Gulas in Nashville.

One of his favourite promoters was Jim Crockett in North Carolina where the money was steady and the competition first class with guys such as the Scotts and the Great Bolo (Tom Renesto) on the scene. He speaks highly of Renesto who he met in Charlotte. Although a heel, Renesto as Bolo was a good, knowledgeable wrestler, scientific though rough with a good attitude.

Kinslow also was gaining respect and a reputation as a reliable worker which put him in good standing with numerous promoters. He was going against the likes of Dick the Bruiser, Dr. Bill Miller, Angelo Poffo, Ray Vilmer, Cowboy Bob Ellis and The Sheik.

One of his best experiences was working for Vincent J. McMahon (Capitol Wrestling Corporation) in New York, Connecticut and Washington. He treasures the memory of his match with Buddy Rogers on Long Island even though he lost. Another highlight was working against Karl Von Hess before 20,353 fans at Madison Square Garden on a card that featured the Kangaroos (Al Costello and Roy Heffernan) Rogers, Johnny Valentine and the great Antonino Rocca. Others he met in matches were Bruno Sammartino and Giant Baba.

While on the McMahon circuit, he teamed with Bill Dromo against top teams such as Von Hess and Skull Murphy, the Kangaroos, and Don Curtis and Mark Lewin.

At almost every juncture of a pro wrestler’s career there is a life-changing experience. Kinslow’s occurred in 1963 when he was working in Charlotte. Veteran wrestler Louis Papineau suggested to him that he contact Larry Kasaboski in Northern Ontario for a tour of the circuit. Papineau had been a regular in the territory for over a decade and sensed that Doug would be a good fit for the promotion. After exchanging phone calls with the promoter, Doug was invited to come to North Bay at the start of the season.

Although the promotion had declined since its heyday in the 1950s, there was still an adequate fan base and Kasaboski attempted to provide entertaining shows with talent such as Ricki Starr, Bobby Hart and Gorgeous George Jr., and the midgets headed by Lord Littlebrook. To add some mystery, Matt Gilmore and Vic Rossitani donned masks as the Hangmen. Kinslow and Hart teamed often that season.

Doug’s value to the promotion was acknowledged by Kasaboski when Kinslow won the Labatt’s North American Jr. Heavyweight Championship. But his greatest accomplishment that season was when he met and married a North Bay girl named Leona Veraldi. 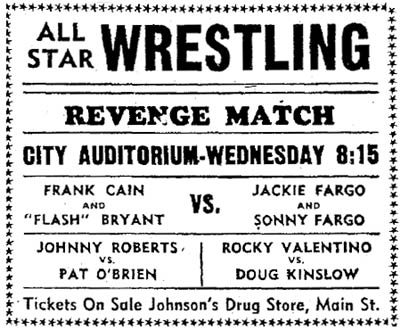 “Larry was a nice person to work for,” Doug recalls. “He was really a great guy, very honest and he paid fair. If you had a complaint, he listened to you. He was just a nice person to be around.”

The following year Doug didn’t return to the north but worked in various places including Mobile, Alabama. But by 1965, he was back with Kasaboski for another season which was also a chance for Leona to reconnect with her family. This time he took on the added responsibility of booking and brought a young wrestler named Bob Kelly from Louisville with him. He promptly named him Irish Bob Kelly.

In addition to regulars such as Hart, Gorgeous George, the Great Dane, Paul DeGalles and the Hangmen, also on the scene was the explosive new duo of Terry and Ronnie Garvin. The Garvins would be the foundation of the promotion for the next five years and their exploits were not only legendary inside the ring but also outside. Stories about the Garvins flow freely like a cold pint in a Sudbury tavern after a rough day in the mines. Kinslow had several to relate.

“We left the arena one night after the matches,” Doug begins, “Bob Kelly and I were traveling in one car and Terry and Ronnie Garvin in another. As we pulled out on the highway, suddenly the Garvins’ car raced by us and continued to speed until they were out of sight. We wondered what the big rush was but gave it no further thought. But as we proceeded several miles down the road we came upon Terry and Ronnie standing on the shoulder of the road hitchhiking. They were wearing cowboy hats and boots and each one was smoking a cigar. They were both stark naked as they stood by the side of the road.”

Kinslow and Kelly cracked up but continued driving. To this day, Doug still laughs at the thought of the Garvin boys standing on the side of the road in their birthday suits.

“Yet another time,” Kinslow continues, “we were staying in a second class hotel in Sault Ste. Marie when the Garvins did an encore. Kelly and I had gone into the lobby for some soft drinks and we were talking to the desk clerk as he was working. The clerk was going back and forth into the back room. Terry and Ronnie wandered down from the second floor, again stark naked wearing only cowboy boots and hats and smoking cigars and just stood around in the lobby. The old gentleman on the desk came from the back room. He glanced at the Garvins with a look of disbelief but never batted an eye as the Garvins walked back up the stairs to their rooms. It was almost surreal.”

Kinslow stayed in the north for the early part of the season before departing. Although crowds were sometimes low in numbers, Kasaboski complimented him by telling him he had made more money with him as booker then with anyone earlier.

There was no denying that Kinslow was a workhorse on the mat who sometimes worked with thoroughbred opponents but it was equally true that he was a thoroughbred in life and remains so to this day.

“When I went up to Northern Ontario, it was my first road trip as a wrestler,” recalled Bob Kelly. “I had many opportunities to talk to Doug and he taught me a lot about life on the road. There were always people around you because you were a wrestler and often there were temptations. I always remember what Doug told me once. He said, ‘Bob, there’s always going to be temptations… but what ever you do, do not forget your family back home that’s depending on you.’ He told me a lot of stuff about how some of the other boys lost everything. I never forgot his words.” 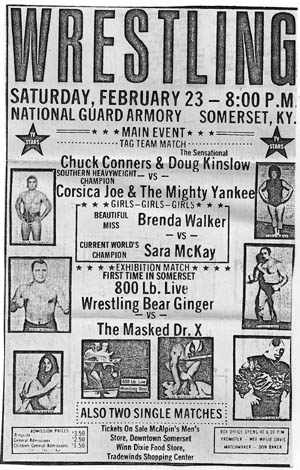 Kinslow in the main event from the early 1960s.

Kelly also recalled the sensitive, respectful side of Kinslow.

“One night this big guy approached Kasaboski at ringside and said he wanted to wrestle,” recounted Kelly. “Larry spread the word around with the boys but the only one to take the challenge was Doug. I was going to referee the match and was thinking of ways to help Kinslow if something happened. But Doug was real cool. He told me that when he pinned the guy, I was to count 1-2-3 very slow. True to his word, Doug toyed with the guy and didn’t have to hurt him to get the pin. He than helped him up, shook his hand and held up the guy’s hand. He got a standing ovation from the very big crowd.”

It took all kinds of personalities to make up the wrestling world. The loud, boisterous party goers, the quiet family men, the irresponsible ones who threw their money away, the braggarts and troublemakers. And the many who were responsible, thoughtful professionals.

Then there is Doug Kinslow.

By 1968, the Kinslows had adopted a son. Doug had been on the road for 10 years making a good living but sacrificing a stable home life. The paternal instincts kicked in.

“I thought at the time it was best to come off the road and get into something more suitable,” Doug explains. “From 1968 to 1978 I scaled back my schedule and wrestled part-time around Kentucky and Indiana. I got involved in a contracting company and in property management as vice president. Later my partner from the company and I opened a nightclub named Bachelor’s II in Louisville.”

Today he enjoys retirement in the town where it all began. He fondly recalls his career and all the people he met. He was known in the business as a class guy and a gentleman. He was a straight arrow compared to some of his more rowdy contemporaries.

You can be sure that someplace where old wrestlers meet to talk about yesterday, there are some who still remember the southern gentleman who traveled the land among them as a partner or an opponent but above all as a friend.

For without question, Kinslow was one of the fine young specimens who made the game what it is today.