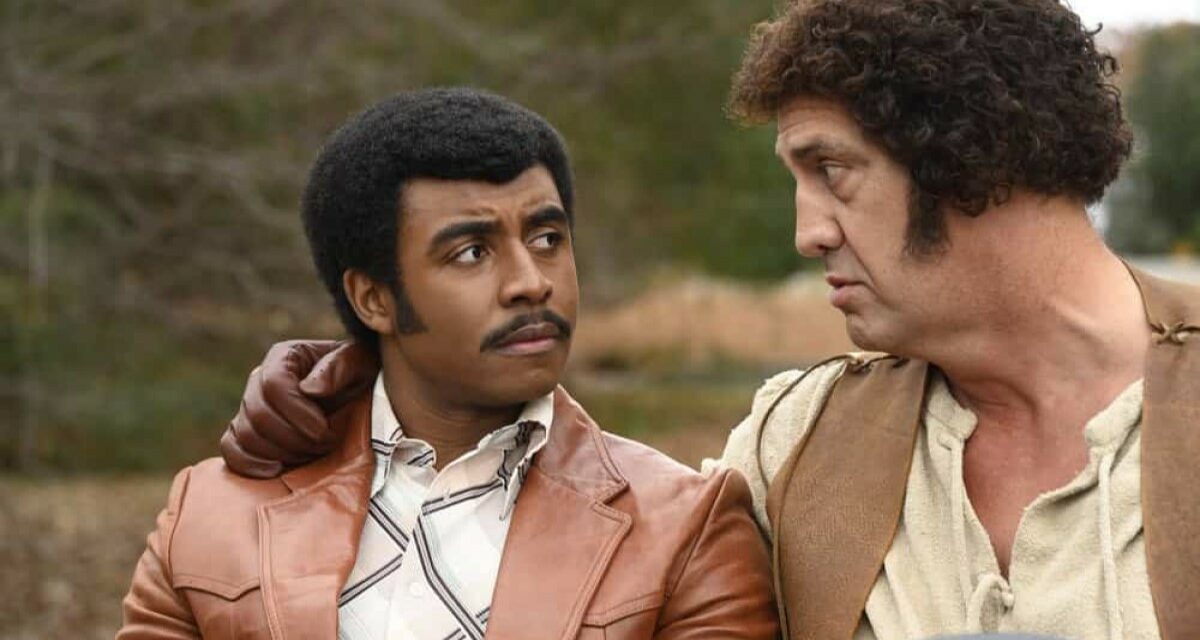 A lot of people are flooding the web with outrage over recent casting efforts in Young Rock, specifically featuring the Attitude Era wrestlers. On top of that, there’s brand new chatter about people who weren’t actually in the situations portrayed by the show. To all of those lodging complaints, the question is: were they not watching the first two seasons?

In this week’s episode titled “It All Goes Back to Childhood”, the show continues to stretch the truth, play loose with the facts, and just make some stuff up. It has been this way since the very first episode, and it’s not going to change before it finishes its run. The latest transgressions are the continuing tale of Ata (Stacey Leilua) and Rocky’s (Joseph Lee Anderson) World Pacific Wrestling promotion, and a side trip by Rocky to visit André the Giant (Matt Willig) on the set of The Princess Bride.

The most intriguing and most impactful moment in the show comes early as Dewey (Adrian Groulx) is still stealing Snickers in 1986, but he’s soon to go through a lasting transformation. While on the topic of Snickers, does anyone else think that The Rock’s recent apology via purchasing a store’s worth of the candy bars to make up for all those he stole in his youth now comes off as nothing but a promotional stunt for the show?

Back to Dewey, and to Groulx. He hits the gym and goes through a growth spurt … transforming into Bradley Constant. Yup, it seems that the youngest Rock has just been written out of the timeline. He will presumably show up again in some other kind of flashback, but that will only get more challenging as Groulx himself grows up.

There are family problems all over the place in this episode, with Ata and Rocky sparring with Lia over the wrestling business landscape, Rocky still dodging Afa who is mad at him for abandoning him in Saudi Arabia, and Dewey finding himself caught in the middle of it all and getting into trouble while unsupervised. While Lia (Ana Tuisila) suffers in silence, unable to call up Ata to talk about the latest happenings on Days of Our Lives because they’re in a battle for control of the wrestling market, Rocky gets an invite to visit André on set in England.

Instead of what was a joyful experience, according to story after story of those who worked with the Giant on the movie, André is miserable and the show has Rob Reiner getting frustrated and upset by working with him. This allows Rocky the chance to show up and get André out of his funk, but by the end of the trip it’s André who’s picking Rocky up and getting him on the path to making peace with Afa. Rocky spills his story to André that had him booted out of his home at the age of 13, building his life up on his own from there.

We see André scooting around on a golf cart, which stands in place of the ATV he is said to have bombed around the English locations of the film shoot (famously coaxing Cary Elwes into taking it for a drive which ended up with the lead actor suffering a broken toe).

Back in Hawai’i, Dewey, now looking quite a bit older than his friends, sneaks them into see the R-rated Blue Velvet. One of the friends wanted to see The Gods Must Be Crazy, which is a solid choice … that came out six years earlier than Blue Velvet. After the movie, Dewey buys them beer which is a bridge too far, and he ends up in prison. Worse than that, he’s bailed out (and chewed out) by Lia.

While there are troubled teenaged times ahead for Dewey, everyone else does their best to patch it up. Afa and Rocky enjoy a quick, manly peacemaking chat, while Lia and Ata get back on speaking terms and can finally vent about their soap opera to one another.

As always, Dwayne Johnson brings it back to 2033, in which the story that has him seeking a coffee deal with Prime Minister Angela Honig of fictional Gjelghiughm comes to what seems to be an abrupt dead-end, with Honig emphatically rejecting any deal in front of reporters.

Stay tuned to SlamWrestling.net for updates on this breaking international political scandal (and everything else about Young Rock too).