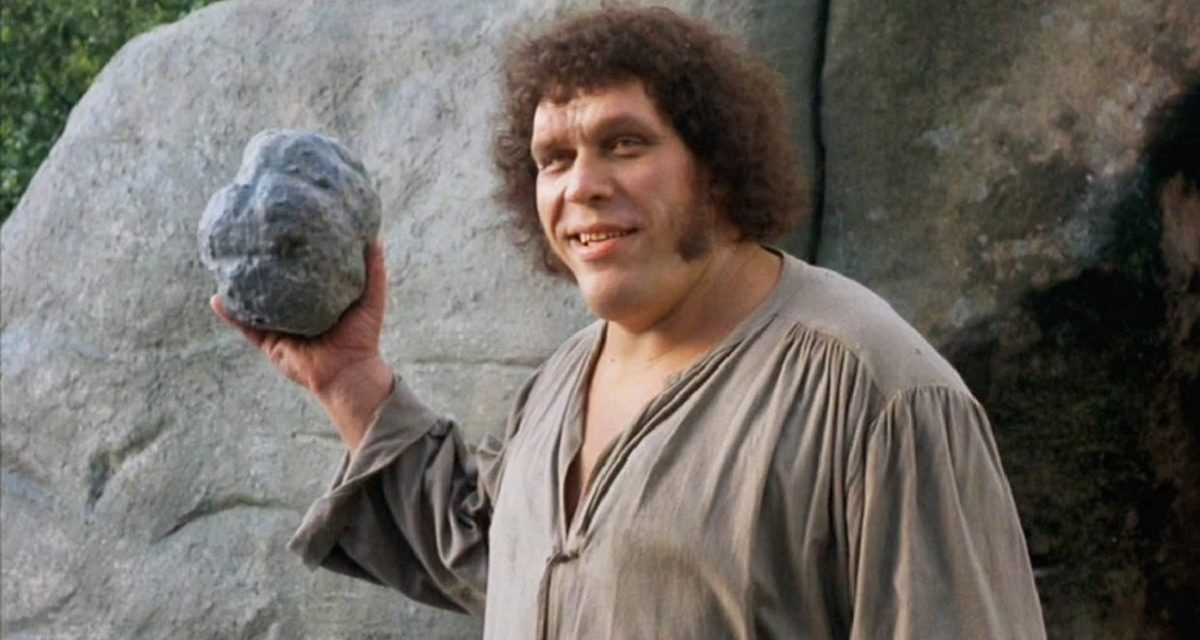 This past Sunday, the surviving members of the cast of The Princess Bride reunited online for a table read of the film, in support of the Wisconsin Democratic Party. After the reading, actors Cary Elwes, Mandy Patinkin, Billy Crystal, and director Rob Reiner shared stores about working with the legendary wrestler Andre the Giant, who played the character of Fezzik in the classic film. 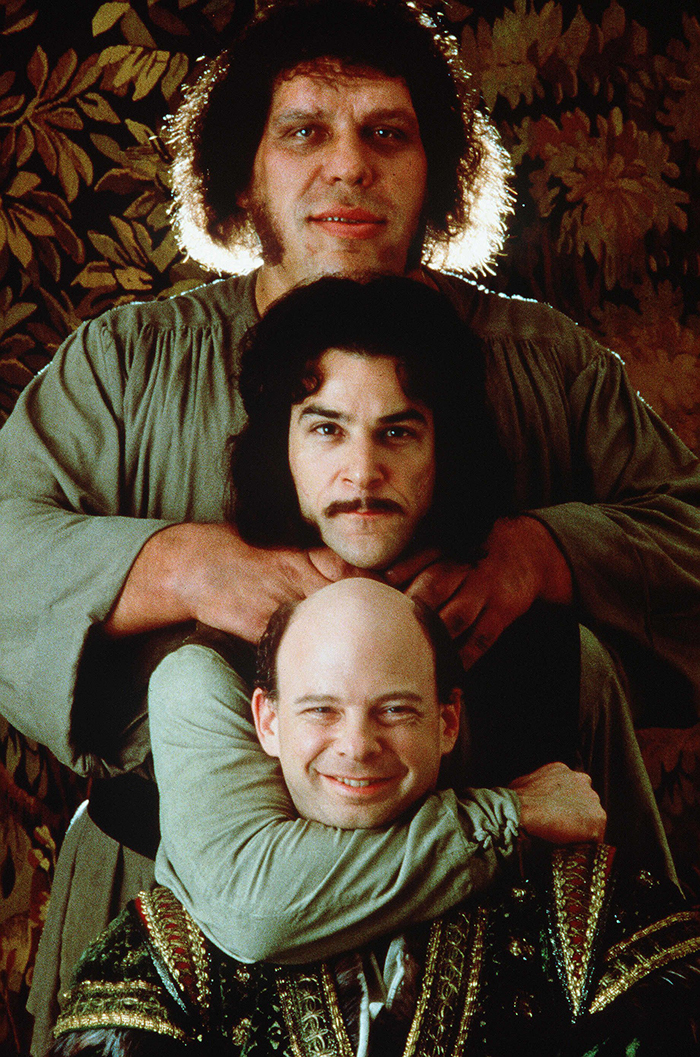 Andre the Giant, Mandy Patinkin, and Wallace Shawn in a promotional shot for The Princess Bride.

Reiner kicked off the discussion, talking about a memorable – if surreal – moment he experienced. “We had this sequence that we (shot) but we didn’t use (in the final film). After the grandfather leaves, the boy starts leafing through the book. And he looks out the window, and he sees the four heroes on the four white horses, and they’re waving to him, and that was the way we were going to end it. We had this sequence, and we had the four white horses, and we wanted to suspend them in the air. So, now we have Andre who weighed 500 pounds. So you couldn’t just put him on a horse, you had to find a way to lift him down with wire, with cables and all this. The day we were going to shoot this, the Nouveau Beaujolais came out. I’m not exaggerating here: Andre started drinking at 9-o’clock in the morning, and he drank literally twenty bottles of Nouveau Beaujolais all day. We were going to shoot that sequence towards the end of the day. It was 8-o’clock that night, and I’m walking down to the end of the soundstage, and there’s a little misty rain. And they open the doors of the soundstage, and from the ceiling, a drunken giant is being lowered on cables to sit on this horse, and he goes, (in a drunken slur), ‘Hello, Boss.’ And I’m thinking, ‘What the hell kind of job do I have?’”

Billy Crystal, whose experiences working with Andre would inspire another film that he would produce and star in, My Giant, shared another gem.

“We had dinner, and he had (drank) vats of stuff. We get to the lobby of the hotel, and he falls asleep on the floor. So there’s a beached giant, and they couldn’t move him. It was like Gulliver. (The hotel staff came) out and (were) wondering what to do, so they let him sleep. But when the morning came, he was still there. So they rolled him up in this rug, and they moved him to the side. They called a cab, and the cab comes, and he had a Renault. It was like a circus car. Andre could have used it as a skate. The cab driver is like, ‘I can’t get him in my car!’”

The group all marveled at the vast amounts of quantities that the giant could put down.

Though Elwes’s character Westley was able to put Fezzik to sleep in the movie, the actor noted that it was him who nearly passed out after taking a drink of Andre’s favourite beverage.

“He drank these pitchers filled with incredible amounts of alcohol, and he called them ‘The American,’ he recalled. “He let me sip it one day – it was this beer pitcher full of alcohol. I don’t know what airplane fuel tastes like, but it was pretty close to what I imagine it would be. I spat it out, and he laughed. He would drink these things like four or five a day, it was unbelievable.”

“I remember one day we were shooting, and he had twelve bottles of wine at lunch,” Patinkin said, still amazed. But more amazed with the fact that the alcohol had little to no effect on Andre, except for one minor change in his behaviour, which he re-enacted for his castmates:

But, they stressed, that Andre’s penchant for drinking wasn’t driven by recreation, but rather to numb himself from pain, and in particular the pain from a back surgery that he’d had shortly before filming began.

“He told me the reason he drank was because he had terrible back problems,” Elwes noted, “and he couldn’t take any medication for it. The doctor asked him, ‘What do you take for the pain?’ and Andre told him, ‘Well, I drink, Boss.’”

Reiner confirmed that Andre’s pain did require certain work-arounds during the shoot.

“We had this scene where Robin goes out the window, and she’s floating down, and he has to catch her. We had this (plan) that we wanted to drop Robin from just off-camera, and he would catch her in his arms. But because his back was so bad, we had to use this little slant-board (to do the stunt). Robin weighed nothing, maybe a hundred pounds. But he couldn’t do it.”

The round-table ended with a more tender memory. Like castmate Chris Sarandon (who participated in the table read) – previously shared in an interview with SlamWrestling.net – the cast was blown away by how generous and kind Andre was to his fellow castmates.

To that effect, Patinkin shared a story that spoke to Andre’s giving spirit.

“Wallace Shawn had a fear of heights. When we were going up the Cliffs of Insanity, they had these (fake) cliffs that were made of rubber. They had this slit in the cliff, and they had a forklift through it, and created this whole system of bicycle seats where Robin, Cary, and myself were seated on the bicycle seats, and Andre was standing on the forklift, and that’s how they (made the effect of us) climbing up. (Because) Wally was nervous about it, there was a double for him on the set. But then at the last minute, he said he would do it. And he was on his bicycle seat, and the thing started going up the mountain. Wally was clearly concerned, and Andre put his arms around him and said, ‘Don’t worry, I’ll take care of you.’ And from that moment on, Wally didn’t worry. He was so sweet.”

In the table read, comedic actor Josh Gad played the part of Fezzik, and he was humbled to “fill the giant shoes” of Andre. The cast commended his performance, with Patinkin noting, “Andre’s looking down on you right now and smiling. He loved this film, and he carried it with him where-ever he went.”