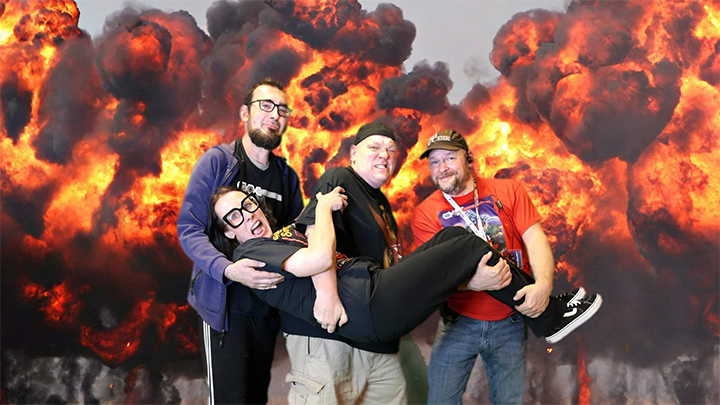 There we were: four podcast co-hosts trying to out run the terrifying and fiery explosion behind us.

There were four podcast co-hosts: myself, deathmatch wrestler Mad Man Pondo (Kevin Canady), illustrator/graphic artist Joe Tong and filmmaker/podcaster extraordinaire Robert Bellamy. The four of us have been co-hosting The Figure Gore, a monthly podcast that explores our fanaticism of all things horror and pro wrestling, since 2020. But the explosion behind us was merely a green screen. Don’t worry, we weren’t in any actual danger. And selfishly, I was grateful that I wouldn’t have to start running as I really hate running.  It was just a great opportunity to mark a special occasion with a photo courtesy of  Teresa Oldham, one of the rad vendors at the CK Expo, a pop culture convention, in Chatham-Kent, Ontario, that ran on April 30, 2022. (Bellamy is the co-founder and showrunner of the annual event.)

And what was the occasion? The convention marked the first time that all four of us were able to meet up in person. Tong and Bellamy reside in Chatham-Kent, while Pondo is in Indiana and I’m near Winnipeg, Manitoba (but started working with them when I was in New Mexico). We had been planning this meet up for months and I’m happy to report it exceeded all my expectations.

The Figure Gore, which in case you haven’t already figured it out, is a fun play on the pro wrestling finisher, the figure four leglock. The idea for the show resulted after pro wrestling author, Kenny Casanova, introduced me to Bellamy when he was a host during the first ever Wrestling Bookmarks COVID-Con virtual event. After discovering we both were passionate about horror and pro wrestling, we decided to do a podcast together. Casanova even christened us with our show name.

So, the first episode of the podcast just features Bellamy and I. Pondo and Tong were guests for the second show… and they just never left. The chemistry and connection that resulted in the four of us together made the show so much better so it’s been the four of us co-hosting ever since. It turns out Pondo is a walking encyclopedia when it comes to horror. He can recall any details of every horror film he has ever seen! He knows more about the genre than the three of us put together. And bonus: he is in the indy horror film, 2001 Maniacs, alongside Freddy Kreuger himself, actor Robert Englund. Tong designed an awesome logo for the show and alongside Pondo pontificates and educates us about deathmatches. Bellamy, whom we have dubbed our leader, put together a fierce and bloody intro video with the song “Want & Need” by Abandoned Souls. 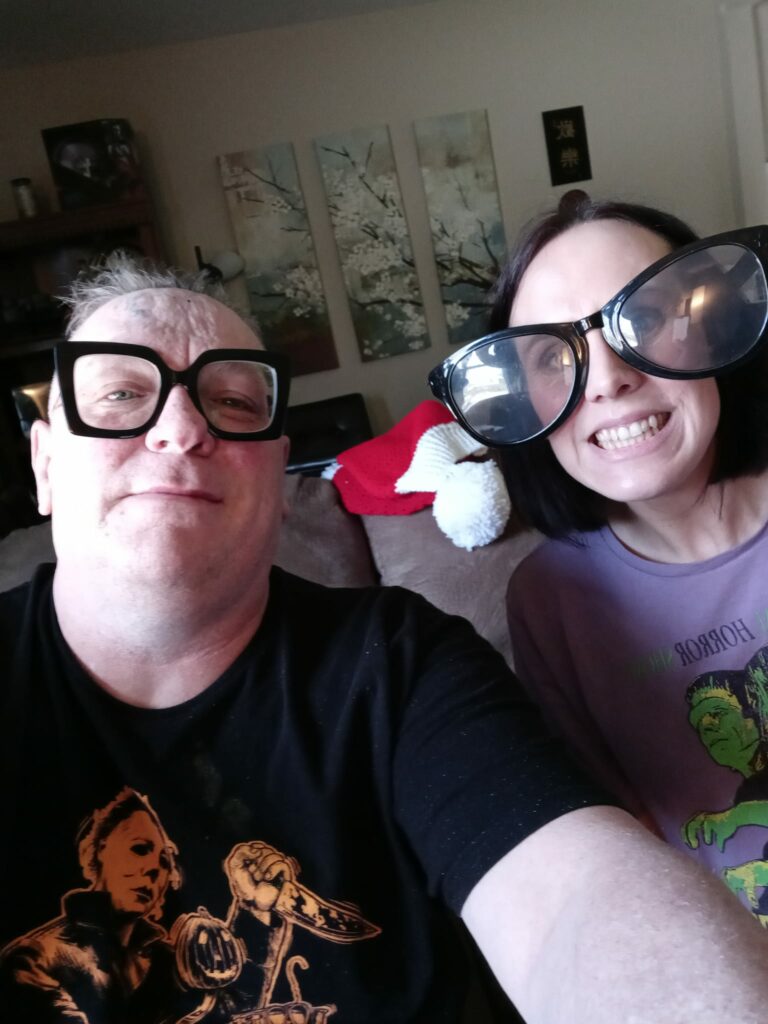 On each episode we discuss upcoming horror releases we’re anticipating and our most recent horror viewings. We also have a fondness for low budget horror finds, especially ones you can purchase at the dollar store. We like to rate these movies on a scale of $0-$1 on how much we’d actually be willing to pay for these flicks. There have been countless times where the four of us felt we were owed money after viewing some of the monstrosities we’ve found. Pondo’s reviews are always memorable (so much so that my non-horror loving husband has actually checked out some of the cheapies Pondo has endured completely of his own free will) and he has plenty of stories from his wrestling career that has spanned over three decades.

And I endure endless jokes about being a nerd and for how large my eyeglasses are. In one memorable episode, Pondo put on a giant pair of black sunglasses and changed his display name to “Jamie 2.0.” Pondo promised that he would give me the glasses the first time we ever got to meet in person. He presented me with the glasses the day before the convention and I proudly display them in my home office. In return I gave each of the guys a horror movie that was made in Manitoba. We’re hoping to review it in an upcoming episode.

At the end of every episode, Pondo always reminds everyone to check on the people in our lives. With the prevalence of mental illness in our society, especially in light of the pandemic, it is an essential message that I’m so proud to be a part of.

OK back to the convention. The day before the event was a setup day. I confess I really didn’t help out much as I was anxious to pester Pondo with a bunch of horror and wrestling questions. We talked about his wrestling career; his book Memoirs of a Madman, written with John Cosper; intergender matches; his favorite wrestler, Sgt. Slaughter; the Johnny Depp/Amber Heard defamation trial (the four of us are proud members of Team Depp), and how we felt about recent horror flicks including Malignant, X and The Greasy Strangler. (Fans of our podcast will recall that I despise Strangler, Tong and Pondo love it and I’ve so far successfully convinced Bellamy not to watch it. I’m such a good friend!)

Pondo was scheduled to be one of the special guests at the convention so we naturally had to take a “lonely Virgil” style photo of Pondo at his booth, since there wouldn’t be any attendees visiting him until the next day. If you Google, “lonely Virgil memes,” you will see photos of pro wrestler Virgil (Michael Jones) sitting alone at his autograph booth. 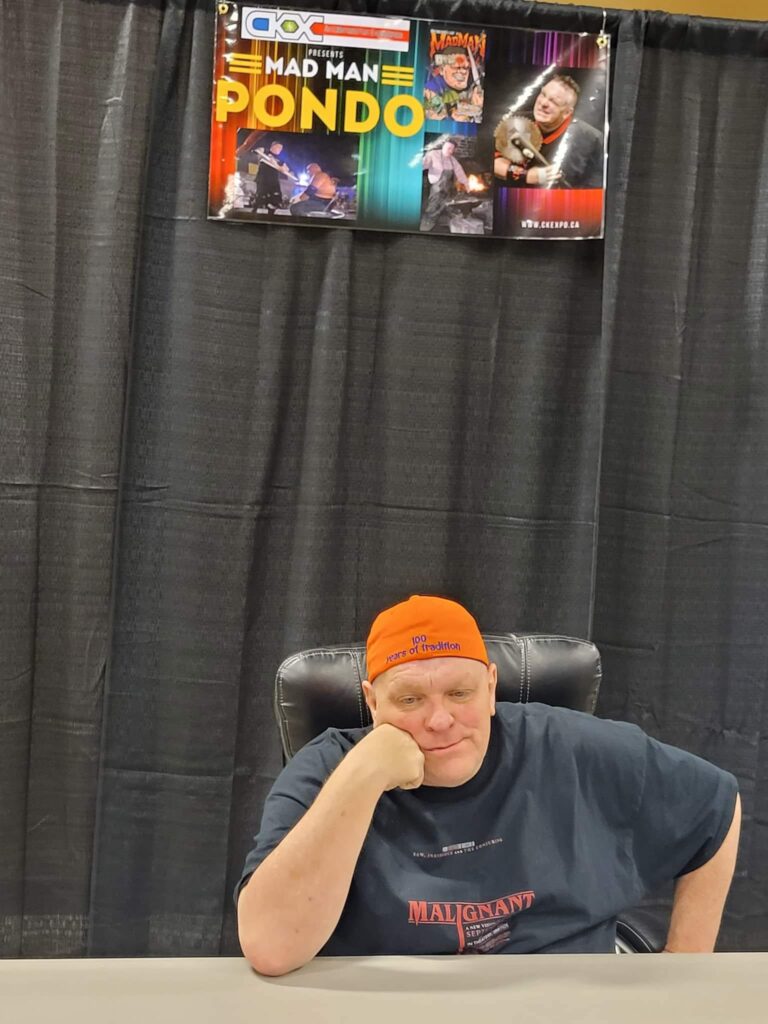 That evening the four of us were finally all together as we attended a double feature horror movie screening as part of the convention’s festivities. There were some technical issues with the first film, The Scarehouse, so we moved on to the second feature, Holy Hell. Writer/director/lead actor Ryan LaPlante and lead actress, Alysa King, were on hand to answer questions afterwards. To give you an idea of what kind of movie experience Holy Hell was, it’s essential to know that after LaPlante’s mother read the script she told him, “You can’t show this to anyone!” But funnily enough, both of LaPlante’s parents appear in the film. The movie, which follows a priest who goes on a murderous rampage after reaching his breaking point with the sinners of the world, was very grindhouse style and rough around the edges. It wasn’t something I’d watch again or want to own, but the passion and humor of LaPlante and King was infectious. They also fully encouraged us audience members to heckle the film, how amazing and unpretentious is that?

After the screening, the four of us decided to film an episode of the show while we played the card game, Cards Against Humanity. For those who have not had the pleasure of playing it, the game consists of question or fill-in-the-blank black cards. For example, during our game Bellamy played the question card asking what was one thing that could stop an asteroid that was heading towards the earth. Tong, Pondo and I each chose a white card from our hand to answer, with most options being quite raunchy so plenty of hilarity ensued. The answer card I decided to play consisted of a picture of the actor Sean Connery in the iconic red mankini he wore for the movie, Zardoz. The player who is it for that round, so in this case Bellamy, chooses their favorite answer. The first player to have five of their answers chosen as the best wins the round. And yes, naturally I won that round. I can’t share much more about our answers for fear of SlamWrestling.net being shut down for impropriety. But suffice it to say that there were plenty of inappropriate answers, there were plenty of moments where I started crying from laughter and Pondo and I even learned a new and disgusting biological term. Pondo also had a knack for distinguishing/identifying which answer cards were played by myself, Tong and Bellamy. (This is probably not necessary but just a disclaimer: our show is meant for mature audiences, so put the kids to bed first before you tune in!)

On convention day, Bellamy was naturally running around like crazy. (He even managed to log an impressive 8.5 km on his Pokémon Go mobile game.) Tong and Pondo were at Pondo’s booth where he signed pictures and copies of his autobiography. Fun fact: Pondo’s booth was right next to George Mihalka’s booth, the director the Canadian horror classic, My Bloody Valentine.  I ended up volunteering to be a pinata mascot for a lady named Charlene Renaud. Renaud, one of the vendors at the convention, created the Precious Pinata educational toy to teach children about “safety, mental health, relationships and life skills.” 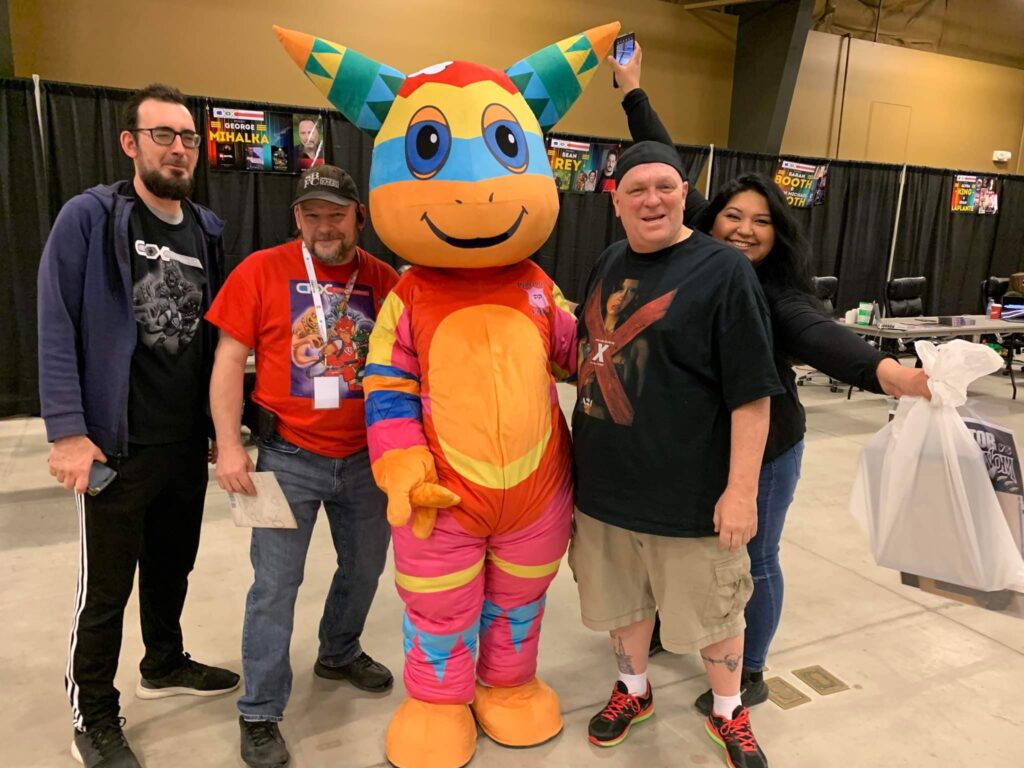 Later that day, we got to meet two of The Figure Gore’s biggest fans, Tom Charlong (who wrestles as The Death Merchant Jaxon Payne and is currently the Next Generation Heavyweight champion for Courage Pro Wrestling) and Pam Ortiz. Charlong and Ortiz have never missed an episode so it was incredible to meet them both in person. The couple even entered the pro wrestling cosplay contest held at the after party that night. Charlong went as Payne and Ortiz was Macho Man Randy Savage. Ortiz won.

The after party was held at a local bar. The event featured the aforementioned cosplay contest, hosted by none other than Al Ruddick, who was dressed as Savage for the entire convention and after party. There was also some improv from the local group, Bearly Funny, and live episodes of both the Time Well Wasted and of course, The Figure Gore podcasts. With us being on last as the main event, most of our audience was already quite tipsy and animated, so we just did a mini-episode. 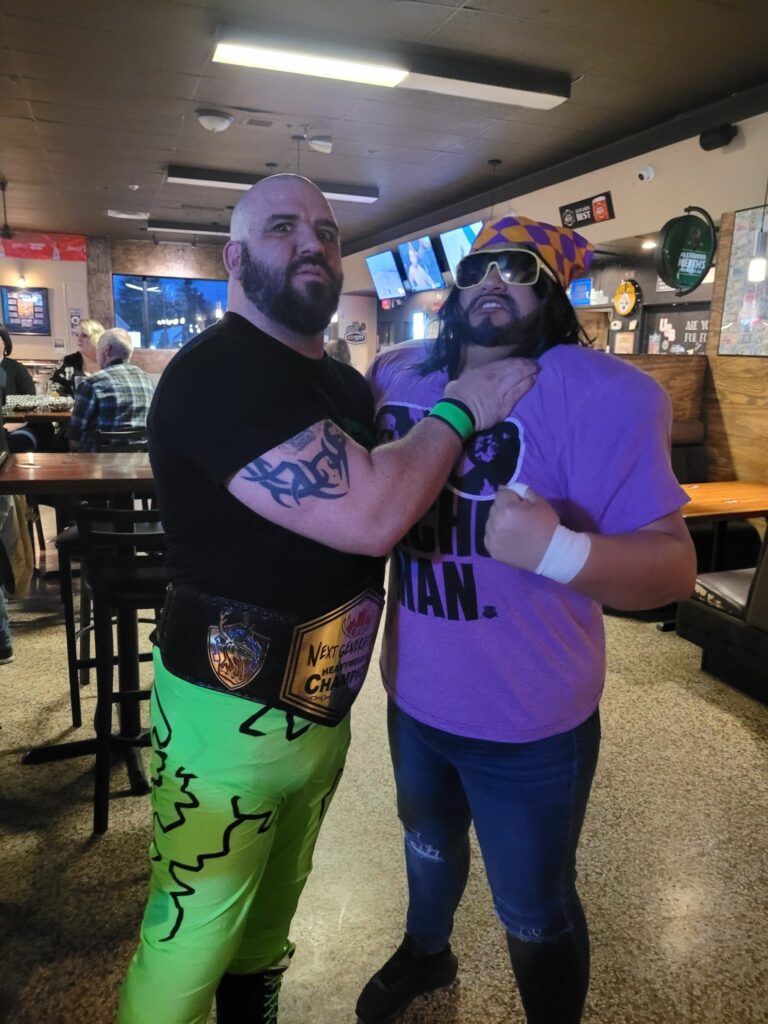 The next day we were all pretty exhausted and Bellamy could barely move after all the kilometers he’d walked. Pondo, Bellamy and myself had lunch with Charlong and Ortiz before Pondo drove me to the Windsor airport on his way home.

It still seems very surreal that four people came together over horror and wrestling and became a wonderful, eccentric and twisted little family. Getting to meet in person was completely seamless and just sheer joy. I’m so grateful for my three co-hosts and to everyone who has checked out and naturally become obsessed with our podcast. I look forward to doing many more episodes with these three amazing gents and I’m already planning my return trip for the convention next year! Stay scary my friends!