Bookmarks Covid-Con a cure for what ails us

For many of us, the outbreak of COVID-19 has meant constantly facing two dreaded c-words: cancellations and closed. But for authors/wrestling fans Kenny Casanova and John Cosper, this world pandemic has them focused on a more positive word: creativity as the duo proudly co-launch the first ever Wrestling Bookmarks COVID-Con.

This three-day free online event will showcase wrestling authors from Friday, May 1 to Sunday, May 3. Viewers can tune in via the event’s Facebook group page and on FITE TV. Facebook viewers will also be able to contribute questions that the event’s moderators will pass on to the guest speakers.

Cosper says the idea for the event was inspired after hearing about an upcoming online author fair. He wondered if a similar event could be developed for wrestling fans.

“It was Saturday morning, April 11,” remarked Cosper in an email interview with SLAM! Wrestling. “I was on Facebook, and a local author I am friends with shared a link for an online author fair. I thought it was a cool idea and started reaching out to some other wrestling authors about doing an online author fair for wrestling authors. Kenny was one of the first people I contacted. By Saturday night we had started a Facebook group and were filling in time slots. By Sunday night, we had already expanded to two days. It just kept growing from there.”

Casanova admitted he went “nuts” with the idea. “I pretty much told John, watch this and hold my beer,” he joked.

The two went forth booking a wide variety of wrestling authors and wrestlers who have authored books resulting in a shorter Friday evening event , followed by two jam-packed days of speakers.

“They (the speakers) love the idea and have been very cooperative in making things work for the fans in these trying times,” emphasized Casanova.

Viewers will have the opportunity to see a new speaker approximately every 30 minutes. At press time, speakers include Diamond Dallas Page, Dutch Mantell, Al Snow and Sabu. Cosper also hints that “there may be surprises along the way.” [Full disclosure SLAM! Wrestling’s own Greg Oliver (2 p.m. ET Sat.), Bertrand Hebert (1 p.m. ET Sat.) and Pat Laprade (7:30 p.m. ET Sat.) are also slated to appear.]”No one is being paid, but hopefully fans will support the authors and wrestlers who come on to do Q&A,” pointed out Cosper. “A lot of our guests have missed pay days with all the events being canceled this spring (due to COVID-19). If you enjoy someone (seek out their website/merchandise and support them whether you) buy a book, a T-shirt, or an autographed photo.”

He added, “We want people to have fun and enjoy doing something wrestling related. We’re all sick to death of sitting at home all day. We would rather be at wrestling events. But if we have to be stuck at home, why not spend the weekend listening to people talk about pro wrestling?”

And after the weekend is over Casanova says he plans to keep giving back to the fans.

“We will be holding a (smaller version of this event) every month,” shared Casanova. “An author/wrestler wrestling book type interview on the Facebook page. Also free in the same format.” 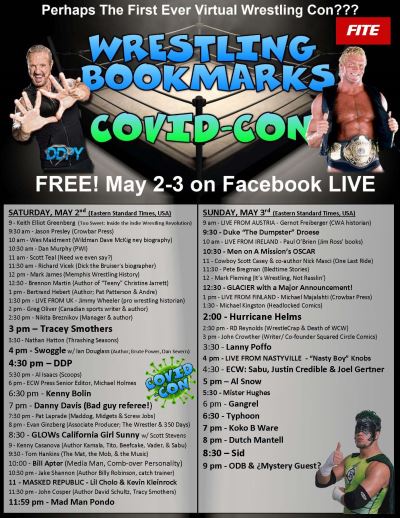