Author O’Brien has been with J.R. through good and bad

Over the past few years Paul O’Brien wrote two of Jim Ross’s autobiographies and got to see him at his happiest moments, including when he re-signed with the WWE. However, O’Brien also got to see J.R. at his lowest point when his wife Jan Ross died. That range of emotions is captured in the recently-released Under the Black Hat: My Life in the WWE and Beyond. 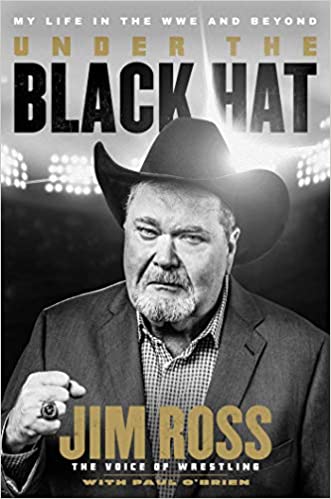 In an email interview, O’Brien recounted how he ended working with the famed wrestling announcer despite the distance between Ireland and Oklahoma.

“A few years ago, I wrote three wrestling crime novels set in the territory days, called Blood Red Turns Dollar Green trilogy. The wrestling world really took a liking to these novels and Jim was one of the guys who tweeted about them a couple of times. Then he asked me to come as a guest on his old podcast, and after we finished the interview, he told me that he was writing a book too, and could he send me over a chapter to get my take.”

“When Jim sent it to me, I rewrote it, and sent it back. It seemed easier than sending back a ton of red notes. But then I presume I offended him by changing it, because I didn’t hear anything for a couple of weeks. Then one day Jim’s manager, Barry Bloom, called me and said Jim would like me to come onboard that project. I was stunned and excited, then we hammered out a deal and off we went!”

After Slobberknocker was released in 2017, which detailed Ross’ life until 1999 at WrestleMania 15, J.R. knew that O’Brien had to write his second book, Under the Black Hat.

“Jim told Barry after Slobberknocker that if I wasn’t onboard then there would be no second book. So, I met Barry in L.A. and we hammered out the terms over coffee one day. Jim was his usual fair and generous self, so I came onboard again. But honestly, if you’re going to be involved in a project where you spend over a year thinking, talking, researching and understanding someone else for a living, you’d better be excited about the subject matter.”

“Later that year, Jim was touring in Ireland, and we signed the contract after one of his shows. Jim obviously felt comfortable with me and the way I work, and he was very vocal about signing me up on the next book too.”

Under the Black Hat — which O’Brien has yet to get a physical copy of as of yet due to the COVID-19 global pandemic — features many stories from the past few years. There have been highs and lows in J.R.’s life and Paul was around him during that time.

“Honestly, it was fascinating — sometimes heartbreaking. I got to know him at his happiest, when he re-signed with WWE for instance, and then I got to really see him at him lowest when Jan died [in March 2017]. He’s gruff around the edges at times, but getting to understand him, you find out that he’s actually extremely funny, well-read, and hugely generous. I got a call one day from Barry, and he said, ‘J.R. wants to wipe the mid-five-figure advance he paid you, because he’s so happy with the book.’ Jim just called Barry and said he wanted me to keep the advance, and begin earning on my percentage from day one of the book release. That’s what I mean when I say he’s hugely generous.”

This very personal book goes into deep detail about the death of J.R.’s wife Jan Ross.

“The chapters about Jim’s late wife, Jan, were terrifying to write. I knew just how much it meant to J.R. to have Jan come across exactly how she was in person. I was blown away by their love story and the more we got into the book, the more I wanted to know how they handled this crazy profession as a couple. Jan Ross was the wife and partner that made it all tick for Jim. So many in the wrestling inner circle knew that, and we wanted to make sure that the general fandom understood her legacy behind the scenes of what they were seeing every week on TV.”

Even with the emotional lows that Paul experienced writing about the death of Jan, he would jump at the opportunity to work with J.R. again.

“I would work with Jim on anything he wanted. We are different generations, from different countries, who probably have some differing philosophies, but I grew very close to who the man under the black hat is. I owe him a lot. And on top of that, we work extremely well together. I’m fluent in J.R.-ese now. When I drop the toast, I mumble to myself, ‘Bah Gawd as butter is my witness, it’s broken in half!'”

While O’Brien has other projects on the go, he’s very proud of writing J.R.’s book, Under the Black Hat: My Life in the WWE and Beyond.

“I’ve been asked by other names in the business if I’d like to co-write their books too, but unless the right circumstances prevail, I think I’d like to go back and make another movie, or write another novel maybe. Last year I was lucky enough to be signed by a manager in L.A. so I’ve just sent him my first script this week. I like to write new things all the time — anything that that I haven’t attempted yet is particularly of interest to me. But for right now, I just want all the readers out there to love Under the Black Hat as much as we loved writing it.”

“Of all the things I’ve written so far, I’m really, really proud of this one.”