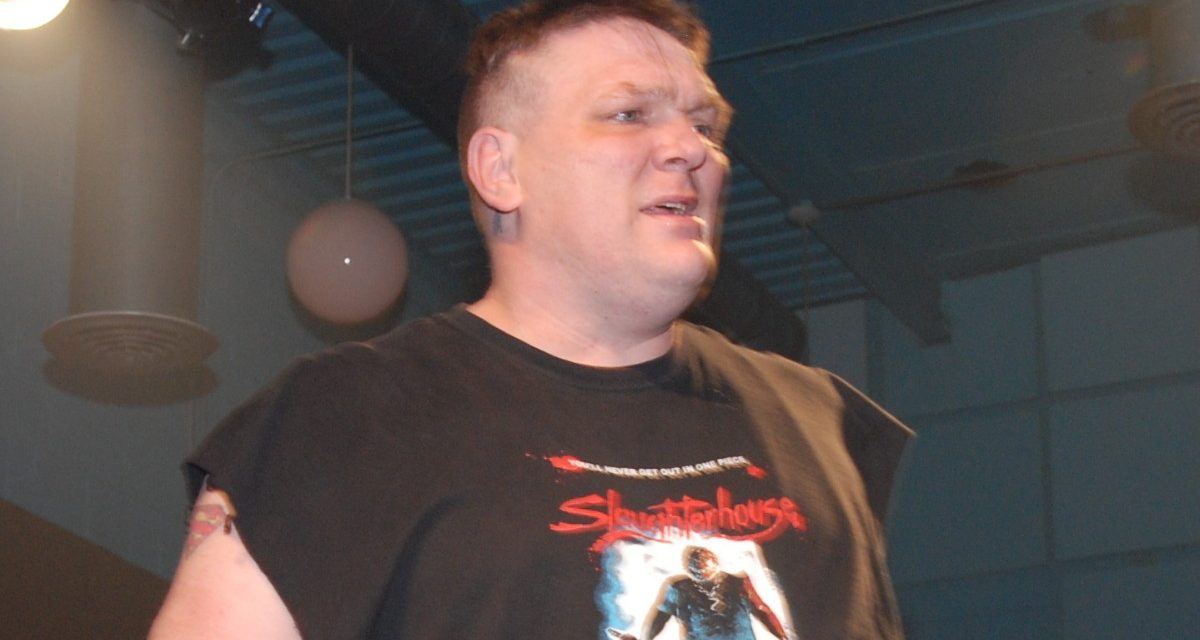 It’s often said that professional wrestling isn’t everyone’s cup of tea. Well, deathmatch wrestling would be like taking that cup, wrapping it in barbed wire, and pouring in a handful of thumbtacks. This week, Ontario fans will get a chance to see a pair of deathmatch shows, as Stranglehold Wrestling returns to the Toronto area for its Devil’s Playground Tour. Ready to brew his own brand of violence for the show is hardcore hero Mad Man Pondo. 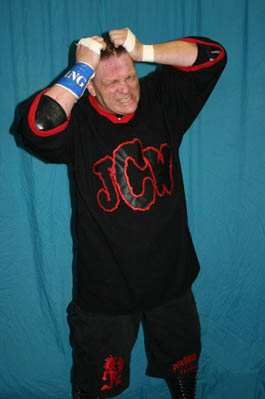 A death match specialist, Pondo (real name Kevin Canady) is looking forward to the events, which are being held on Thursday in Oshawa, and Toronto on Saturday. In an exclusive interview with SLAM! Wrestling, Pondo promised that he would show the fans what hardcore is all about.

“I hope people come to the shows,” he said, “because I always give 110%. Death match fans know what to expect, but I hope that some people who have never seen a death match show come out too.”

Characterized by matches with no rules where participants freely, and frequently, punish their opponent with weapons like light tubes, thumbtacks, barbed wire, and anything else they can get their hands on, death matches aren’t for the faint of heart.

“(They’re) like a car wreck,” said Pondo. “As you’re going by them, you’re going to slide your eyes over there no matter what. Depending on how you feel determines if you stare, or if you turn your head.”

For his part, Canady has never felt the need to turn his head away from the violence. Even as a child, he exhibited a high tolerance of pain.

“I was always getting hurt,” he remembered about his childhood. “I fell out of a tree one time, hit three branches, and then the ground. I was up playing with the other kids later that day.”

It was a given, he said, that he would parlay those skills into being a professional wrestler. In 1989, at 20 years old, Canady started his career, but realized soon thereafter that traditional wrestling wasn’t his forte. 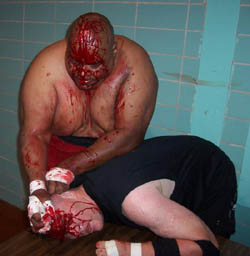 Abdullah the Butcher has control of Mad Man Pondo.

Watching tapes of Japanese hardcore promotions W*ING and FMW, Canady realized that he did have a skill that was highly prized in those companies. Specifically, “(I could) cut myself like a piece of sausage.”

Changing his style also prompted a name change. In creating the Mad Man Pondo moniker, Canady looked at some of the hardcore wrestlers that he admired, at least for part of it.

“Watching wrestling, it was always the crazy guys that got me the most excited — guys like Abdullah the Butcher, Bruiser Brody, and the Sheepherders. I wanted to come up with a name that showed that I was crazy like them. There were guys with names with ‘Crazy’ or ‘Maniac’, but nobody had the name ‘Mad Man’. Abdullah was the closest, they would call him the ‘Mad Man from Sudan’, but that was a nickname as opposed to his full name. So that’s how I chose ‘Mad Man.'”

The second part of his name was taken from someone a lot less inspiring.

“There was this movie called The Party Animal and a character in there named Pondo Sinatra who was a seven-year college student who never got laid. I do believe,” he laughed, “that my buddies called me Pondo because I never got laid.”

Soon, Pondo became a regular on the U.S. death match circuit, and it wasn’t long before he found international success in Japan.

“I was in Japan from 2000 until April 2008,” he said. “Then the economy hit really bad. They’ve asked me to come back since then, but it’s not like it was before. They don’t do consistent tour days. Now it’s like two days this week, three days the next, then back to two. It’s really hard to make a living over there like that.”

After returning home, Pondo continued to grow his legacy, working for numerous companies such as the Insane Clown Posse’s Juggalo Championship Wrestling, Big Time Wrestling, in addition to the company he owns, IWA East Coast. In addition, in what may be surprising for many fans who only know him for his death match work, Pondo has recently started working for Ohio Valley Wrestling (“make sure you put that in the story,” he stressed, “for the people that think that all I can do is bleed”). 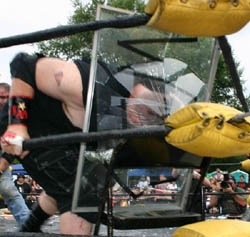 Pondo teaches a window a lesson it won’t forget.

While it may seem easy to dismiss death match specialists like Pondo as lacking bona fide wrestling talent, Pondo believes that is an unfair characterization. He notes that psychology can, and indeed is important regardless of whether or not weapons are involved in the match.

“You can use psychology,” he confirmed, “you just have to figure out what it is. Say you have a barbed wire board match. The biggest bump that you’re going to take through that barbed wire board, that’s your finish, that’s the coup de grace. All the small stuff, you do that first, build up to the big bump, everybody goes nuts, and that’s the 1-2-3.”

“Nowadays, too many guys will go out there and bang each other in the head for the whole match and call themselves hardcore. You have to use psychology. A lot of guys can’t figure that out, they just do big bumps all the way through.”

Unfortunately, he said, it’s not easy to teach younger death match upstarts the nuances of the game. “They either got it, or they don’t,” he said. And even if they do, that doesn’t mean that injuries aren’t possible. Even Pondo himself isn’t immune to the dangers.

“The worst injury I ever had? One time, I fractured my skull. I didn’t have enough money to get stitches or anything, so I didn’t take it to the hospital. Instead, I superglued it shut. I didn’t get all the holes all the way in, and then air started leaking into my brain. For about a month and a half, I would turn my head one way, and it would feel like the room kept turning.”

Even with injuries like that, Pondo has no thoughts of getting out of the death match game. Pointing out that some of his hardcore heroes like the 72-year old Gypsy Joe and Sheepherder (aka Bushwhacker) Luke are long-time veterans who are still putting on hardcore performances today (in fact, Luke will also be participating at the Stranglehold shows), Pondo doesn’t see himself retiring at only 41.

“I think wrestling will quit me before I quit wrestling,” he said. “I don’t think I’m a good enough wrestler to go (as long as they have). But I’ve done a lot of things as a professional wrestler. I’ve had opportunities that I never thought I would ever have. I’ve wrestled in Japan, which was my dream, I was in a horror movie with Robert (Freddy Kreuger) Englund, I’ve been in video games (the popular Backyard Wrestling series). I own my own company, IWA East Coast. I’ve traveled the world — Australia, Germany, England, Canada. Frankly, I’m afraid that if I stop wrestling, those things will stop, too.”