It’s a big weekend for lucha libre fans in Toronto as El Hijo del Santo, the son of Mexico’s greatest wrestling icon, comes to town, in conjunction with a sci-fi, comic, horror and anime fan expo, and, colourfully enough, an art show. 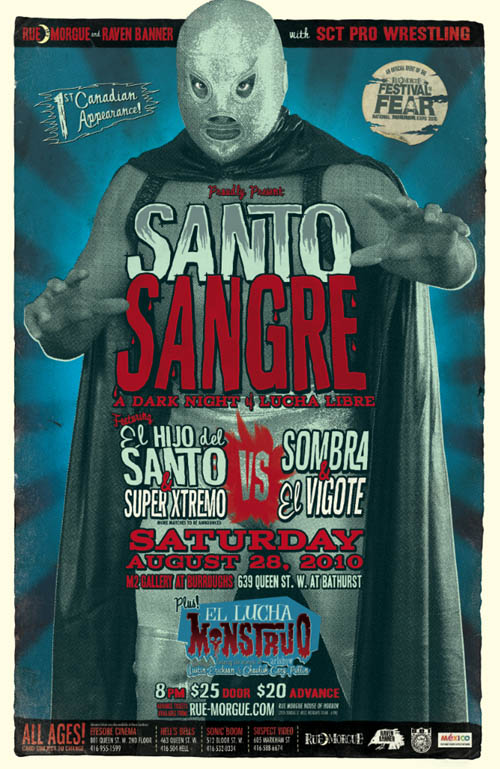 Exclusive prints of original artwork will be on display and for sale by Toronto artists Gary Pullin and Justin Erickson of Rue Morgue Magazine fame, as well as some exclusive (non-lucha) paintings by acclaimed Toronto pop artist Joey Dammit.

“Mexican wrestling — lucha libre — is much more than just ‘sports entertainment,’ it’s really an integral part of Mexican culture,” explained co-organizer Michael Paszt of Raven Banner Entertainment. “So we felt it was only fitting to hold this event in an art gallery as it presents wrestling in a new context not only highlighting its theatrical value but most importantly its cultural value.” 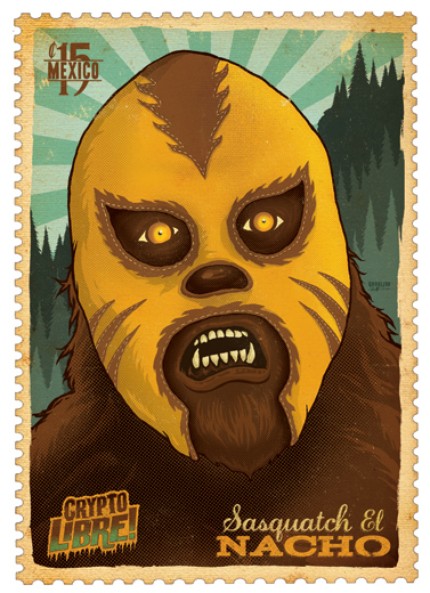 El Hijo del Santo arrives in Toronto late Thursday, and will be at Fan Expo Canada at the Metro Toronto Convention Centre as a part of the Rue Morgue Festival of Fear Horror Expo.

“It is with extreme pride that Rue Morgue welcomes El Hijo del Santo to Canada, a rare icon in the truest sense of the word,” said Rodrigo Gudiño, president of Rue Morgue and co-event organizer. “We could not have asked for a better ambassador from a country where classical heroism still exists, able to break barriers of culture and language without lifting a finger.”

“Having El Hijo del Santo in Toronto is a huge honour for us. The man is practically royalty in Mexico,” explained Paszt. “In a country of 100 million people, 95% of all Mexicans can identify with two of the most adored and revered iconic images: The first one being the beloved ‘Virgin of Guadalupe’ and the second one — the silver wrestling masks of the legendary El Santo, Mexico’s most famous wrestler and also Hijo del Santo, Son of EL Santo and icon in his own right.”

It was the hoods of the lucha libre stars that inspired Pullin. 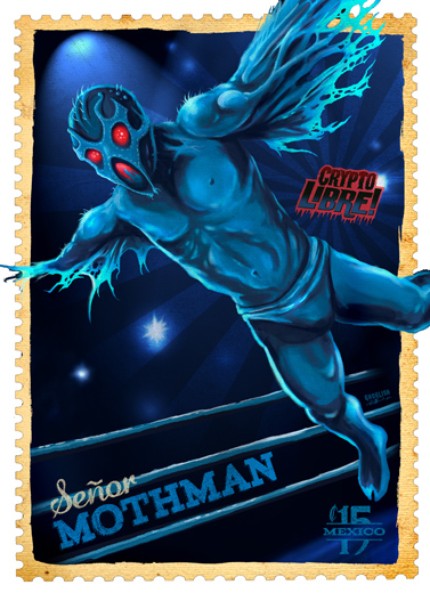 “I like the menacing designs of their masks. It really brings it to a whole new level when you can’t see the guy’s face and he’s trying to tear your head off. Their personas are very mysterious and intriguing. The characters are almost like living paintings, their personalities are so bold and colourful,” said Pullin, an award-winning artist who has been Rue Morgue‘s art director since 2001. “It’s kind of an underground thing here in North America and I gravitate towards subjects that live on the fringe, so that’s appealing too.”

For Erickson, it was the theatricality, the mythos and culture centred around lucha libre that attracted him to the project. “I loved the larger-than-life qualities of these wrestlers and the passion the fans feel for the sport. It’s hard not to get swept up in the emotions of the crowd at a lucha match!” exclaimed Erickson, a freelance artist and graphic designer for Rue Morgue.

Erickson’s art has a movie feel.

“It reminded me about how I and a lot of horror fans felt about the old Universal monster movies, so I thought it’d be fun to combine the energy and vibrancy of Lucha with Frankenstein, the Wolf-Man, Dracula and so on,” he said. “Even the older movies starring Santo and Blue Demon had vampires, ghosts, aliens and other miscreants so it was a natural fit. Even Samson vs the Vampire Women holds a special place on my DVD shelf.” 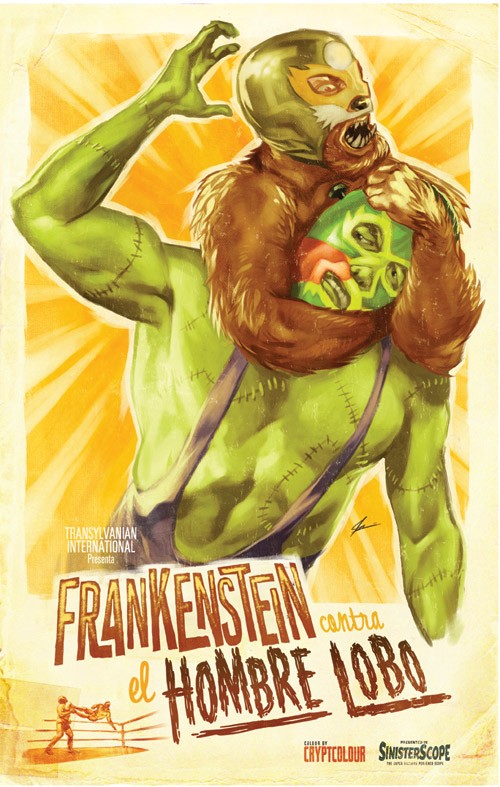 The two artists/co-workers, who admitted to being WWF wrestling fans back in the day, played off each other.

“I love monsters and the macabre so my artwork usually reflects that but every culture and society has their own boogeymen or folklore so I think my artwork can be appreciated on a universal level. Some of my art though is aimed straight at the hearts of horror fans,” said Pullin. “For Justin Erickson’s show, El Lucha Monstruo, I thought, ‘What would it be like if Bigfoot was a luchador? Or if Mothman was flying from the top rope?’ Combining Mexican wrestling and cryptozoology just seemed like a fun idea. I guess it might take a certain kind of person to appreciate that.” 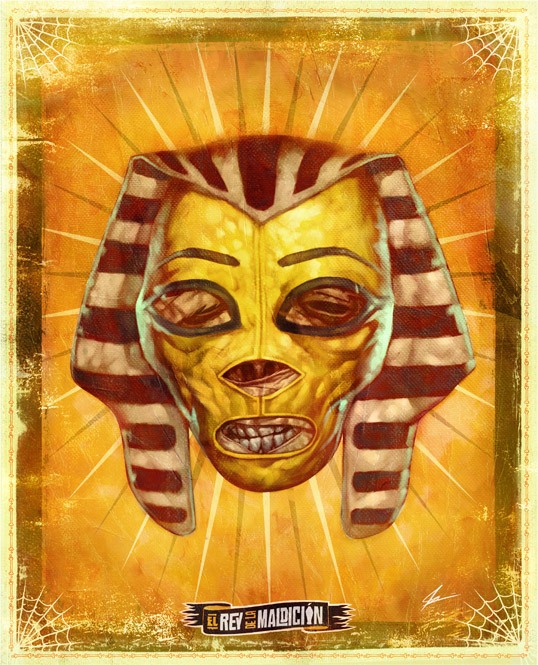 In addition to working full-time at the magazine, Erickson is the Creative Director at Phantom City Creative, putting together art shows, designs logos, gig posters and album covers, as well as contributing covers and inside art for a variety of publishers.

The timing of Saturday’s event is key, Erickson said. “There’s a great alternative art scene in Toronto that I’ve been lucky enough to be a part of and contribute to over the last couple years. With Rue Morgue and its horror con Festival of Fear (the only one in Canada) here in Toronto there’s a great horror-loving crowd. Plus who doesn’t love monsters? They have such a universal appeal which means the art has a much wider audience.”

With this event, a number of lucha libre books, a forthcoming AAA video game, and touring shows like Lucha VaVOOM, it seems that lucha libre is really making inroads into non-traditional markets.

“The iconographic and cultural significance of Santo transcends borders, status, and religious views in the most unique way,” said Andres Marquez, the co-owner of Milagro Cantina Mexicana, which has three Toronto locations. “He truly is a hero in the most basic sense of the word. We respect him so much that the patio in our Queen location has been artistically spray painted in an urban portrayal of his image.” 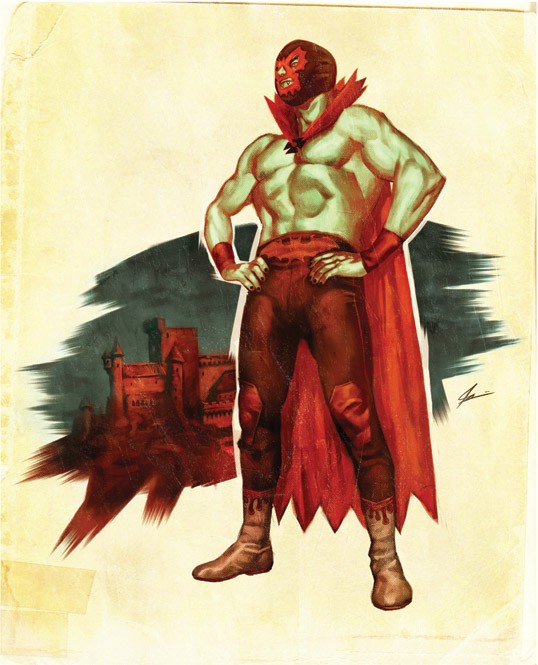