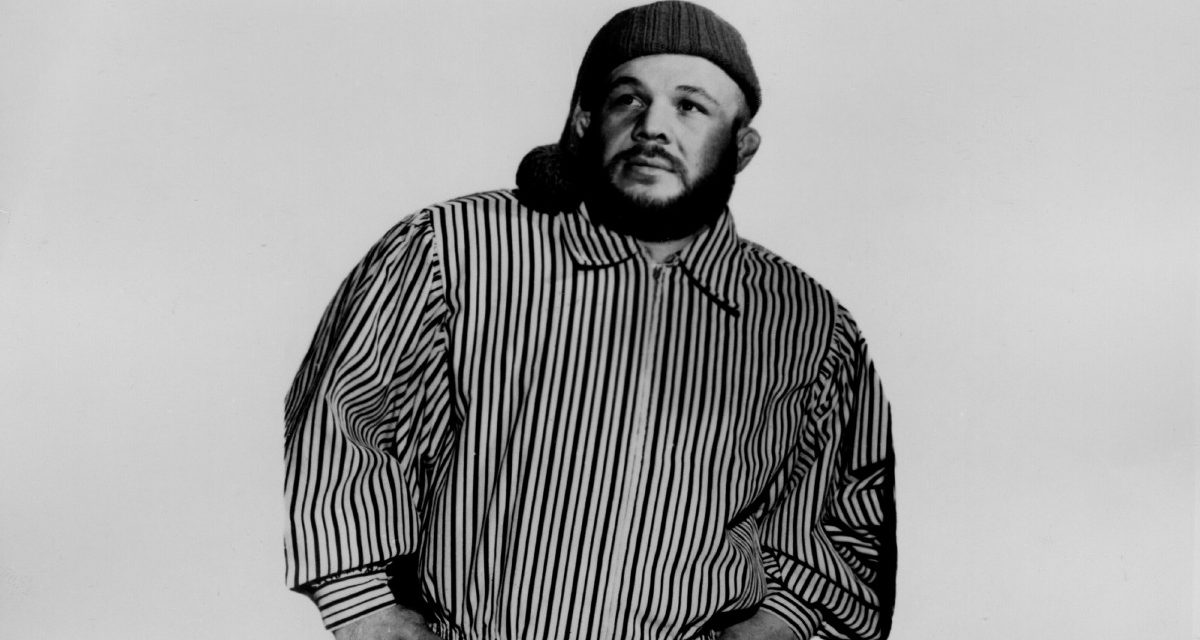 “Tough” Tony Borne, who died this morning at his home at the age of 84, is a classic example of a small man in a big man’s business, a 5-foot-9 yappy fireplug; he’s also a perfect example of how, over time, even the meanest of the mean can become a local hero, in his case that was Oregon.

“At one time, Christ, I couldn’t walk down the street here in Portland without being insulted,” he recalled in 2004. “But I ended up going into the real estate business and doing very well at it.” To play up the memories, Borne continued to shave his head and grow his beard, which he once used as a scouring pad into the eyes of opponents.

Anthony Osborne was originally from Columbus, Ohio, born July 13, 1926. He wrestled in high school and in the U.S. Navy. Columbus promoter Al Haft had an eye on Osborne and convinced him to give pro wrestling a try. 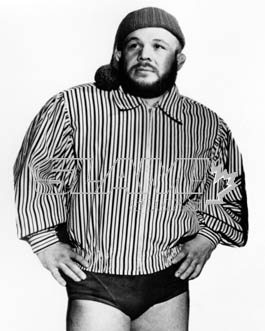 His first teacher was Ali Pasha, but Karl Pojello, who managed the French Angel, was his key mentor.

“When I got into the business, I slept in a gym in Chicago, Illinois, on South Halstead street, Karl Pojello’s gym. I slept in the gym, and the only heat in it in the wintertime was from the hot water tank,” Borne remembered. “Carl took good care of me, but it was a struggle. Back then, $25, $30, $35 was a good payoff. I was born 30 years too soon.”

He and Pojello decided that shortening Osborne to Borne was the right move. (He also worked as Tony Boin and Tony Borrin.) Borne found he had a natural skill at pro wrestling. “It was very interesting to me. I adapted to it very, very well. I think that has a lot to do with the way a guy adapts to the business as to whether or not it’s interesting, or really whether or not you’re successful at it.”

In a December 2003 interview with the Ring Around The NorthWest newsletter, John Tolos addressed Borne’s size. “He wasn’t a big guy but he was dynamite in the ring, he had a big heart,” said The Golden Greek. “No big guy by no means but he wrestled like a giant and he was good, he could talk.”His size was an issue. “I had to move, I’ll tell you,” he said. “At that time, anybody over 240 was a freak. I was 5’9″, weighed about 220, 225.”

Kurt Von Steiger said that Borne had the right nickname. “Tough is right. He is not a big man. You never judge a book by its cover. Tony could handle himself in the ring. Especially when he threw that left handed solar plexus punch.”

Through the 1950s, Borne’s name is on cards from Texas to Utah to Idaho to the Pacific Northwest, where he first performed in 1954, but wouldn’t settle there until 1963 when his son, and future wrestler, Matt, was close to entering school.

In 1953, Borne had a significant run in Mexico, often facing the original Blue Demon, a legend in lucha libre.

Borne was known for his constant chattering in the ring, as well a few patented moves: rubbing his beard into the eyes, his solar plexus punch, a reverse chinlock and his bombs away jump off the top rope. In a 1963 article, writer Bob Franklin described Borne’s jump: “Tony would get his foe groggy, see; then he would lay him face up in the middle of the ring, see; then he would quick like a cat jump on top of the ring post, ya see. That’s not all. Tony would (chuckle, chuckle) jump off the post and hit with one foot on the other feller’s neck. Wonder it didn’t launch his eyeballs like Vanguard II.” 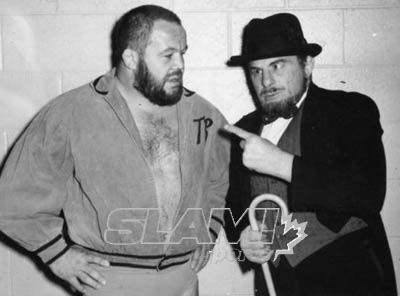 Besides the Pacific Northwest, his name comes up most often as the charge of manager Leo “The Lion” Newman, who had been a pro wrestler before a car accident ended his in-ring career.

The duo hooked up in Amarillo, Texas, under promoter Doc Sarpolis. “Doc liked me. He put me on top right away down in Amarillo. At that time, I was at the height of my career, really,” Borne reminisced. “I think for 38 straight weeks down there, I didn’t lose a fall in a single match. Doc really liked me. Doc told me, ‘I’ve got a guy I’m going to get to manage you, and you guys will be beautiful together.’ I didn’t think too much of the idea at the time. When a promoter tells you something, he wants to try it and you know you’ll make money at it, you’ll go ahead and do anything. So that’s how Leo and I got together. We got along very well together.”

The “Night of the Jackass” is still one of the most famous stipulation bouts in wrestling lore. It was the culmination of a feud between Danny McShane and Tony Borne, and the loser of the match had to bathe the jackass at Houston’s Civic Auditorium. Borne’s manager Newman ended up washing the jackass.Borne said that wherever they travelled, he spoke up for his manager, insisted their pay be equal. “I stuck up for him wherever I went. I know we went up to work for Johnny Doyle in Detroit. At the time, it was one of the biggest houses I’d worked in. I wrestled Lord [Layton], who did his TV in Detroit at the Cobo Arena. The promoter, I’d stipulate what Leo was to get for his pay,” he said. “When I got there, he tried to fudge on it a little bit. I went right to him and said, ‘Hey, don’t book me any more, unless you do what you said you were going to do.’ And I stuck up for Leo and he respected that. Consequently, we got along very well together.”

“That’s a Texas match!” Borne laughed at the memory. “It was an interview with Paul Boesch and McShane said something about the intelligence of Newman. It really led from that. Paul Boesch was really the instigator. He was the TV commentator down there. He was the instigator of that. Newman is the one that spoke up and said something like McShane was a jackass for talking like. One word led to another and someone created the match that the loser had to wash the jackass.”

In describing what McShane meant to Texas fans, Borne essentially explained what he would come to mean to fans in the Pacific Northwest: “He was local down there, and I don’t care how he wrestled or anything like that, once you become a local and you’re around a whole lot, you become a favorite of the fans.”

“Don Owen was one of the best promoters that I ever worked for,” said Borne. “He matched the guys that would draw money, and I was just fortunate enough that I worked on top for him quite a bit.”

In this case, “quite a bit” is a bit of an understatement. When inducting Borne into the Ring Around The NorthWest newsletter Hall of Fame, Mike Rodgers wrote that “Tony Borne was Portland Wrestling throughout the ’60s and early ’70s. He held the NW title nine times and the tag titles 19 different times. His team with Lonnie Mayne is still remembered as the most successful in NW history as they held the tag titles 10 times.”

Yet his team with Mayne, a second-generation wrestler, almost didn’t happen, said Borne. “Lonnie was one of the strongest wrestlers that I’ve ever gotten a hold of. Along with his charisma and that, I knew that he could be successful. In fact, he came here, Don Owen brought him in. After the first couple of weeks, Don told me, ‘Shoot, I don’t care too much for this Mayne. I think I’ll get rid of him.’ I told Don, ‘That guy has got more color than any man you’ve ever had here. Let me team up with him. Let me take him and see what we can do with him.’ He really blossomed.”

He did get to team with his son, who would wrestle as “Maniac” Matt Borne, Big Josh in WCW, and the original Doink the Clown in the WWF. He also seconded Matt for some matches in World Class Championship Wrestling in Texas, as “Maniac” battled Al Perez and Kerry Von Erich.The last match for Tough Tony came in October 1981. “Your body tells you. … I went into the dressing room one Saturday night here, and I really hadn’t planned on quitting. I was in the real estate business and was successful at that too. I sat in the dressing room, and I hate to say bad things about my business, but half the guys were puffing on the funny cigarettes. I made up my mind right then this isn’t for me. I walked into the office that night to pick up my cheque. I told Don, ‘Don, don’t book me anymore.’ He looked at me and kind of laughed. He asked why. I said, ‘I got high in that dressing room, and I wasn’t even smoking!'”

“I tried to get him to stay in college. He went down to Southern Oregon. I tried to get him to stay in college. He called me one day and said, ‘Dad, I want to be a wrestler. I want to do it now. If you help me get in to the business, okay. But if you don’t, I’m going to try to get into it myself,'” Borne remembered. “Matt was a very good amateur wrestler. He was a better amateur wrestler than I was. I picked up the phone and called Don Owen. I said, ‘Book me and my son in some team matches.’ Because at this time, I had more or less slacked off from wrestling. I would wrestle once in a while when Don needed someone to fill in. 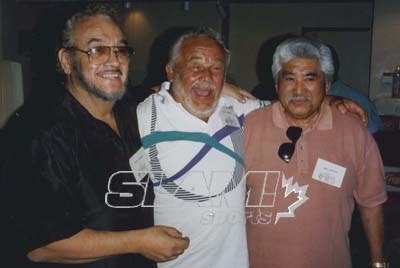 Selling real estate was a natural step for Borne, who learned some of the new business from Kenny Mayne, Lonnie’s father. “I had a couple of friends here who were in the real estate business. They kept asking me to get to it because I did have a lot of television exposure. I was recognizable around here. When I got into the real estate business, people, wrestling fans looking for a house or wanting to sell their house, they’d call me. There were a lot of realtors in business who were better than I was at that time, because I was just learning, but they would call me because they wanted to deal with me. I was getting listings of all kinds. I was doing three or four transactions in one day, which is very good for the real estate business.”

In his spare time, Borne was also a licensed superintendent for American Kennel Club, and enjoyed tending to the family’s gardens.

For his contributions to the professional wrestling business, the Cauliflower Alley Club honored Borne in 1997.

In early August 2010, Borne had a pacemaker placed in his heart, and was in rough shape ever since. He died in his home on Friday, August 27, 2010. Funeral information isn’t known at this time.