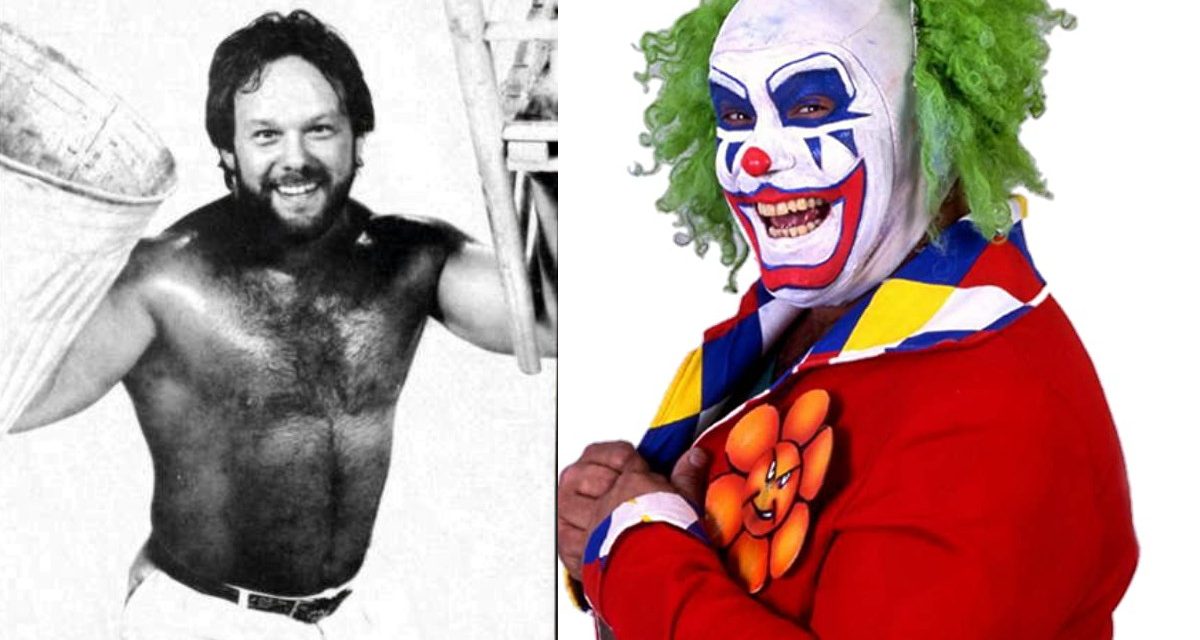 “Maniac” Matt Borne, the second-generation star who funnelled his own personal issues into the twisted Doink the Clown character in the WWF, has died. He was 56 years old.

He was apparently found dead this morning by his girlfriend in their Plano, Texas home.

Matt Wade Osborne, who was born July 27, 1957 in Oregon, was the son of “Tough” Tony Borne, a star in the Pacific Northwest and Texas. 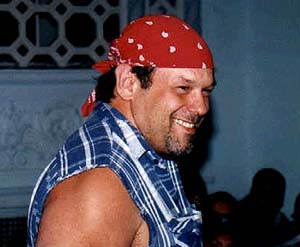 Matt was a high school wrestler who began slowly making his way into Portland Wrestling as a professional.

Under the “Maniac” Matt Borne, he wrestled in numerous places. In WCW, he was Big Josh, a lumberjack.

But it’s his role as Doink the Clown in the WWE that always seemed closest to his heart — and his real personality.

It was based partly upon his upbringing, and his relationship with “Moondog” Lonnie Mayne.

In 1994, Borne recalled the initial meeting with WWF boss Vince McMahon about the character: “Vince just asked me, ‘What was it like growing up in the business for you?’ I told him about Lonnie, how Lonnie had such a big impact on me when I was a kid. He was always pulling practical jokes in the locker room, and locking guys’ cowboy boots together and this and that. I was just a little kid sitting there watching that. Heck, I would start doing it … then they’d came back and find out it was me and they wanted to kill me. It was okay if one of their comrades did it, but here’s this little 10, 11-year-old kid doing it. They wanted to kill me! But I just wanted to be one of them.”

Eventually he would be.

First, Borne went to Portland State University, and helped his father manage an apartment building he owned. One of his neighbors was Jesse Ventura and his wife Terri, and they became good friends.

“I’d go over there every night and sit and watch Saturday Night Live with him, have a beer and party a little bit with him. Him and Terri and I, it became a regular thing,” recalled Borne. “When Jesse would get home from wherever he was working, he’d call me and say, ‘Matt, what are you doing?’ So I’d go over there and we’d hang out. I didn’t know what the heck I wanted to do. I was going to Portland State and I was in my third year of college. Heck, I decided that I wanted to start wrestling. My dad, he didn’t try to discourage me, but just didn’t want me to … he wanted to make sure that it was really in my heart. So, he waited and waited and I kept hounding him.”

“When I started, Roddy Piper just came in the Portland area and we became friends, and kind of took me under his wing. A lot guys, the oldtimers back then, they’d see a second-generation wrestler come in, they’d automatically think ‘here’s another guy that wants it on a silver plater’ — which I never did, but I had a lot of negative things that I had to deal with …”

Once Matt Borne was finally in a professional ring, things moved quickly.

“Hell, I only got in the ring and did a few things maybe two, three times when Don Owen booked me in a tag match with my dad on December 9, 1978.”

Tony Borne once shared his thoughts on his son becoming a pro wrestler. “I tried to get him to stay in college. He went down to Southern Oregon. I tried to get him to stay in college. He called me one day and said, ‘Dad, I want to be a wrestler. I want to do it now. If you help me get in to the business, okay. But if you don’t, I’m going to try to get into it myself,'” Borne remembered. “Matt was a very good amateur wrestler. He was a better amateur wrestler than I was. I picked up the phone and called Don Owen. I said, ‘Book me and my son in some team matches.’ Because at this time, I had more or less slacked off from wrestling. I would wrestle once in a while when Don needed someone to fill in.

Matt could laugh about his debut: “It was my very first match. I think I needed his guidance just a little bit. I was by no means ready to have a match … I just froze out there so many times. But I got through it.”

Tony Borne had the connections and soon Matt Borne was out of Portland, learning his trade abroad. One spot was in Dallas, Texas, for World Class.

One Texas program had Al Perez, with Gary Hart (the booker) in his corner, dueling with Matt Borne, who eventually brought in his father.

“We would have great matches, hour Broadways all the time. We went an hour one night with my dad in one corner and Gary Hart in his corner. The timing of it was perfect. When that hour was up, the bell rang. Gary and my dad each asked for 15 more minutes. This was in the heat of the summer. I looked at Al, I’m going, ‘Holy shit’ because I just lost 10 pounds of sweat in that hot Sportatorium. But we kicked. I was in my prime and so was he. We went 15 more minutes. We went an hour and 15 minutes, and we got a standing ovation. The place was packed, and everyone in that place stood up. It was believable. We had those people for an hour and 15 minutes. It’s a tough thing to do, let alone keep your wind and be able to go, go, go, but to have the people with you too! That’s probably the best match I ever had, with Al Perez.”

When Frank Goodish, a.k.a. Bruiser Brody, had the book in Dallas, he would push his friend, Matt Borne. “Brody and I were really good friends. Heck, I couldn’t believe it. Every TV taping, it was like the Bruiser Brody and Matt Borne hour. He took care of his own business because he wanted his overseas stuff keep strong, so he pushed himself. And he always pushed the hell out of me too. It was unbelievable.”

Also in Dallas, Matt Borne was in a championship tag team with Buzz Sawyer.

It “could have transpired into a great tag team,” admitted Borne. “If we each could have been a little more mature and diplomatic and level-headed and this and that. We had the psychology down. But we just always butted heads outside the ring and it always carried over. I have to say, usually mostly on his part because he would be this dick, like he was going to outshine me instead of working with me. Buzz was a phenomenal worker. He could do things that I couldn’t do.”

In his efforts to improve and get known, Borne worked in a lot of places, a lot of territories. Sometimes he had to leave quickly, such as in Georgia in the early 1980s, when he and Arn Anderson had formed a tag team that was getting a push, and Borne was accused of a sexual assault.

In Bill Watts’ Mid-South/UWF promotion, Borne was a part of the “Rat Pack” with Ted DiBiase Sr. and Hacksaw Jim Duggan. He also made several trips to Japan, Australia, Europe, and even to Egypt to wrestle.

He was even on the first WrestleMania, taking on Ricky Steamboat, whom he had wrestled before in the Mid-Atlantic territory. “At the time, it was just like another show,” he said in 2001. “Looking back, I really don’t think that I thought about it. I thought it would be like an annual thing, I kind of knew that. I didn’t really know exactly where the business was going, I really didn’t give it much thought. I knew that Vince was putting everybody out of business, and I felt pretty fortunate that I was able to be on the card. It was the biggest show that I had ever been on up to that point.”

Nine years later, he would be in a more featured role at a WrestleMania, as Doink the Clown.

But first he had to get through his time in WCW as Big Josh.

“It was different, that’s for sure,” laughed Borne. “I didn’t have a model to go by. I was just given that, asked if I minded changing. I was okay with that because I wanted the job. I was told what it was. So actually I just did what I was told. I really didn’t have a chance to give it much thought. Didn’t have anybody to role it after, but it was probably actually a great opportunity and a great thing for me as a precursor to me doing Doink, getting out of my own self.

“It was probably good for me to do that Big Josh thing to give me a little testing grounds for something was later to come, which was Doink.”

Did Big Josh succeed as much as he could have?

“It’s all in the booking and how it’s booked. If it had gotten a push, yeah, it could have got over more. Whoever has got the pen in their hand, how much success it could have got, I don’t know, I don’t know. But whoever has the pen in their hand is in charge and whether something gets over to large degree has something to do with it. Sure, you’ve got to be able to carry it. Who’s in charge is huge in determining that.”

As the villainous Doink the Clown in the WWE, beginning in March 1993, he was a featured performer, feuding with Brian “Crush” Adams, Bret Hart and others. Sometimes there were other Doinks, too, including Steve Keirn and Ray Apollo, and midget Tiger Jackson as Dink the Clown. 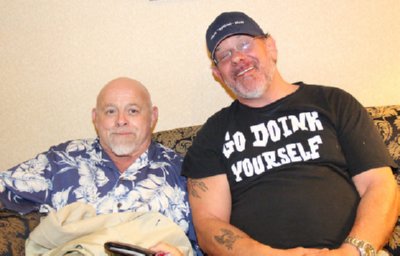 Borne’s drug habits derailed the push though, and he was out of the WWF in late 1993.

Aside from a short stint in ECW, Borne was off the national scene from then on. He kept wrestling independents and appearing at fan fests, helped book in Portland for Sandy Barr, did heavy construction — whatever it took.

Borne was never shy talking about his his personal isses.

“I put myself through rehab, the White Deer Run in Allenwood, Pennsylvania,” he said. “I tried to do it myself, I tried to keep my problems a secret, which is kind of impossible to do when you’ve got drug problems. But I tried to seek help just myself, try to do it myself, but I just couldn’t do it. Finally I just decided I wanted help. I was tired of repeating the same mistakes. I guess I would have some success then I would sabotage myself.”

It was a similar story in his personal life, and Borne was married a number of times, with children from multiple relationships. “I hurt a lot of people,” he admitted.

Osborne was a regular user of Facebook, and on April 23, 2012 posted, “My children, Anthony, Rena, Teagan and Matthew are the most important people in my life. Being estranged from them is sometime more than I can handle. Not looking for sympathy just cherish your children and their lives.”