When Kevin Canady was looking for women to take part in his first annual Death Match Tournament, titled Death Becomes Her, tonight, he channeled his Mad Man Pondo alter ego, and looked for the “crazy ones.”

“I found eight of the craziest girls that I could find,” Canady told SLAM! Wrestling.

It’s a team effort behind the scenes for the show at Spark Recreation Center, in Summit, Illinois, (about 20 minutes west of Chicago), with The Resistance working with Canady’s Girl Fight promotion, which he’s been running for five years now. 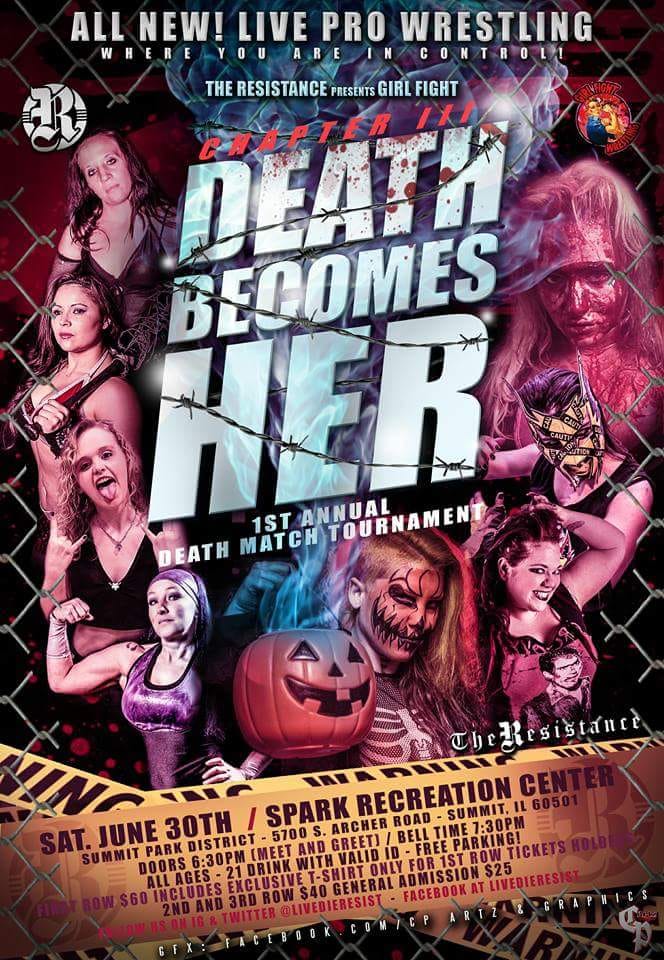 Participants include Jewells Malone, Rebecca Payne, Mickie Knuckles, Randi West, Sage Sin, Maria Manic, Khloe, and Ludark Shaitan. The special referee for the tournament is Dylan Postl (Hornswoggle), who tweeted out, “Tonight I ref a women’s deathmatch tournament! This crazy world gets crazier all the time and I love it!!!”

“You’ve definitely got to go for some crazy people, because you’ve got to be extremely sadistic to be able to want to do this for fun,” Malone told SLAM! Wrestling on Friday, before a midnight Girl Fight show.

“The Hardcore Princess” from Toronto knows all the participants. “I’ve met them from other Death Match tournaments. I’ve competed against some of them before already. Just from being active when it comes to social media, just knowing who everybody is. They’re all crazy, they’re all crazy m***f***rs, and we all deserve to be in this tournament, that’s for sure. The thing is, it’s a good representation, we have me from Canada, and there’s a bunch of Americans too, and we also have Ludark, who’s from Mexico. It’s nice that they’re diversifying their roster. I’m going to be coming out with a Canadian flag, all proud to represent Canada, my hardcore nation.”

Ludark was in town early, having dinner with Canady when she talked to SLAM! Wrestling. She got into the hardcore, violent wrestling style through Mexican stars Damien 666 and Halloween.

The masked grappler doesn’t seen any difference between what men and women can do with weapons at their disposal in a wrestling ring. “We are actually the same, just different,” Ludark said in carefully chosen English. “The guys are bigger than the women, that’s going to be really different. But if we are in the same town, the same match, I think we are the same actually.”

Canady agrees. “They’re a little softer, a little softer than we are [as men], but I mean, that doesn’t mean that they’re not just as brave and as strong as what we are, and they’re down to do it just as much as we are.”

As Pondo, Canady has bled buckets of blood in five countries. He knows what he’s doing as the promoter of this type of match.

“In a Death Match tournament, there really is no precaution,” he said. “You know what you’re getting yourself into. It’s enter at your own risk. You make an agreement to come there and appear. More or less, precautions, I would say, hmm, I don’t know, just bandaids?”