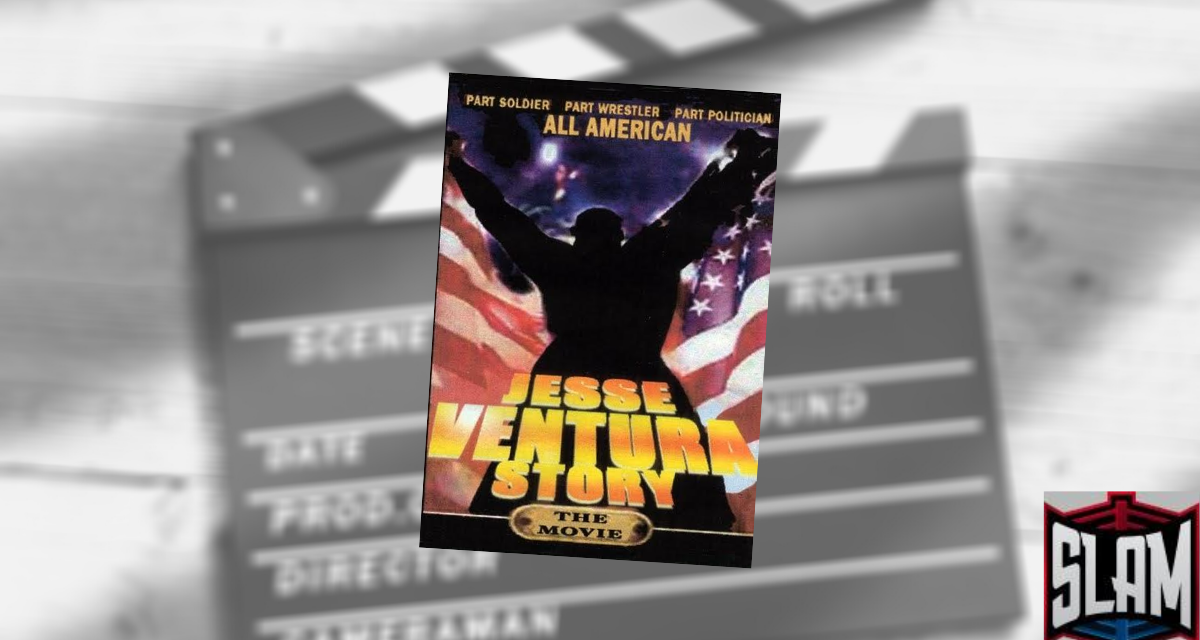 The old saying goes that truth is stranger than fiction. True life stories are sometimes so dramatic that, if pitched as a novel or a screenplay, would get turned down on the basis that life isn’t like that. There aren’t many characters with true-life stories that push the boundaries of believability like Jesse Ventura. Why the makers of The Jesse Ventura Story felt the need to dramatize and fictionalize so much of his biography is, quite frankly, beyond explanation.

The filmmakers were likely dealing with a legitimate failure to obtain authorization concerning Jesse Ventura’s time with the WWF, and were not able to tell the story of Ventura’s flamboyant antics in the company. Being unable to tell Ventura’s story without mentioning the WWF obviously puts this production in the hole from the get-go. Stranger things have happened, though, and the responsibility lies with the filmmakers to take what they’re given and still deliver the best film possible. Unfortunately, it doesn’t appear that they really tried.

Ventura’s wrestling career, in brief, saw him debut in 1975, finding a position not long afterwards in the AWA. He held the tag titles with Adrian Adonis, but did not achieve such success as a singles wrestler in either the AWA or the WWF in the years that followed. In 1984 he was hospitalized for treatment of a blood clot, a condition that spelled the beginning of the end of his in-ring days. He found new success both as a commentator for the WWF and as a dependable supporting player in action movies. Remember that, because the film’s biographical information bears almost no resemblance.

The movie starts a few years earlier, with a young James Janos (Thomas Brandise) cheering on Cassius Clay as he “shocked the world” in defeating Sonny Liston, foreshadowing the future Jesse Ventura’s political career. Young Jesse is instantly enthralled with the world of professional wrestling, but his path to a career in wrestling takes a detour when older brother goads him into joining the Navy SEALs. The film is narrated by Jesse Ventura as Governor (Stewart) — a humourous running joke that has the distinguished gentleman interacting with scenes from his past as he reminisces about his younger days. In the case of his time with the SEALs, he offers such wisdom as “SEAL training is a six month kick in the coconuts, but let me tell you, they are coconuts worth having.” Why hasn’t that been splashed all over military training advertisements?

After his time in the service is up, Jesse works as a bouncer where he meets his soon-to-be wife Terry (Sakovich), roping her in with his rugged good looks and smooth one-liners, and on their honeymoon she helps him come up with the nickname “The Body” (a coincidence on their honeymoon night? The film doesn’t touch that one). Here the story takes a few moments to enlighten the non-wrestling fans that are watching on the “illusion of wrestling.” We are taught how to fake a headbutt, a punch, and to have our face dragged across the ropes all without injury. It is in this murky middle-ground that the film seems perpetually lost — are they playing this for wrestling fans or for the general public who only knows Ventura for his acting and politicking? It becomes obvious from here on in that the intended audience is someone who knows nothing about the history of pro wrestling, because anybody else is about to have their collective intelligence insulted.

Ventura is nervously pacing backstage before his first fight. His wife tells him to relax, that he already knows he’s going to win. Armed with such confidence, he enters the arena for a WCW match against the champ — Goldberg. Ah yes, the vintage 1970s WCW match against Goldberg, who could forget it? Plus, don’t forget what Ventura’s wife reminded him — he’s going to win. So his first professional match, just to set the record straight here, is a WCW World Championship victory over Goldberg. Got it? Good. 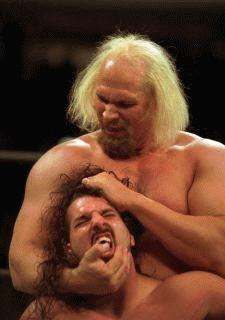 Stewart as Ventura in action against … Kanyon?

From there, Ventura travels the country and is fast becoming the next big thing in wrestling, until a blood clot knocks him unconscious during a match with Kanyon. You remember that one too, right? Ventura is forced to give up action in the ring, and we watch him segue effortlessly into his commentating position alongside Gorilla Monsoon, looking completely in his element holding a WCW microphone. While honing his skills as a heel commentator, Ventura laments the fact that wrestling fans are changing and starting to back the bad guy. There’s no indication as to how much time has passed here, so I have to presume that we’ve jumped ahead a couple of decades and Ventura is now commentating alongside Gorilla at the dawn of the “Stone Cold” Steve Austin era. Yes, yes, now I know that’s what’s happening because here comes the Montreal Screwjob.

Remember how Ventura was talking to his good friend Captain Nice (Bobby Johnston) backstage, who was very down about the fact that the company wanted him to lose to the new guy Raven despite the fact that the match was in the champ’s hometown and he had been a loyal employee for 18 years? Ventura managed to convince the owner that a “shmozz” was a better way to end it, and it was happily agreed upon. Then, as Ventura watched on in amazement from the announcer’s table, Raven locked a sharpshooter onto Captain Nice and the owner, now at ringside, called for the bell. An irate Ventura decided that he’d had enough of the wrestling industry and left the business for Hollywood. Imagine, if the Screwjob hadn’t have happened in 1997 then Ventura would have never left to make 1987’s Predator.

The kicker is that after the last shot of the movie, a statement on the screen reads “Certain events in this drama based on fact are interpretive, certain characters are composites or have been fictionalized, and some names and locations have been changed.” Had they chosen to announce that at the beginning rather than the end, the viewer’s expectations and perspective would be totally different and more open to the “interpretive nature” of the biography.

After he calls it a wrestling career, we watch Ventura’s rise from shock-jock radio host to one-term mayor of his home town, and finally all the way to his unlikely posting as Governor of Minnesota. The film isn’t afraid to tweak the facts for a little suspense in this phase of Ventura’s life, either. It portrays him as the ultimate man for the people, creating a David and Goliath feeling between him and his two political competitors, Skip Humphrey (David Huband) and Norm Coleman (Dwight McFee).

While it’s true that a neophyte, independent politician is certainly classified as an underdog, Republican Party Chair Tony Sutton pointed out in an interview found on Minnesota Public Radio that the filmmakers didn’t stop there: “The inaccuracies make his campaign seem very unsophisticated, very grassroots by having it look like he shot his commercials himself with Dean Barkley (then chairman of Ventura’s campaign) doing the voice-overs,” Sutton says. “That was not true. They had one of the top ad agencies in the country.”

The film often has the most fun in comparing the life of a wrestler with that of a politician, and why not? That is exactly what makes Jesse Ventura an engaging character. While trying to find the best way to launch a verbal attack Humphrey and Coleman in one of many debates, Ventura drifts off into a daydream where he has the two of them at his mercy in his own arena — back in the wrestling ring. The two politicians are seen delivering simultaneous blows to a hunched-over Ventura before he lashes out at the both of them, knocking them down with a clothesline and stomping them into the mat.

David Huband, a stalwart of the Canadian acting scene, recalled the atmosphere around the filming of the in-ring action, shot mostly around Toronto: “They brought myself and Dwight McFee in to rehearse for two days prior to shooting. They showed us how to roll the right way after a blow, they showed us some sequences they do. I did feel a lot of pain after we rehearsed for those two days, in fact, now I recall my entire torso was black and blue. The crowd was totally into it and very supportive.”

Despite being given such a strange script to work with, there are notable performances from Sakovich as well as Christopher Bondy and Nola Augustson as Jesse’s parents. Stewart has no trouble looking the part and holding his own in the ring, but don’t expect much from his dramatic performance. One wonders why the producers considered it so important to have someone of the right size to play Ventura — with all of the other “interpretive” decisions they made, why not go for someone whose acting skills outweighed their wrestling physique?

In the end, the most noteworthy review of the very confusing, very misleading Jesse Ventura Story is that there hasn’t been much from Jesse Ventura himself. That a man hardly known for keeping his opinions to himself neglects to offer one on the film bodes negatively rather than positively. Maybe, similar to his view on bleeding, he ain’t got time to watch it.