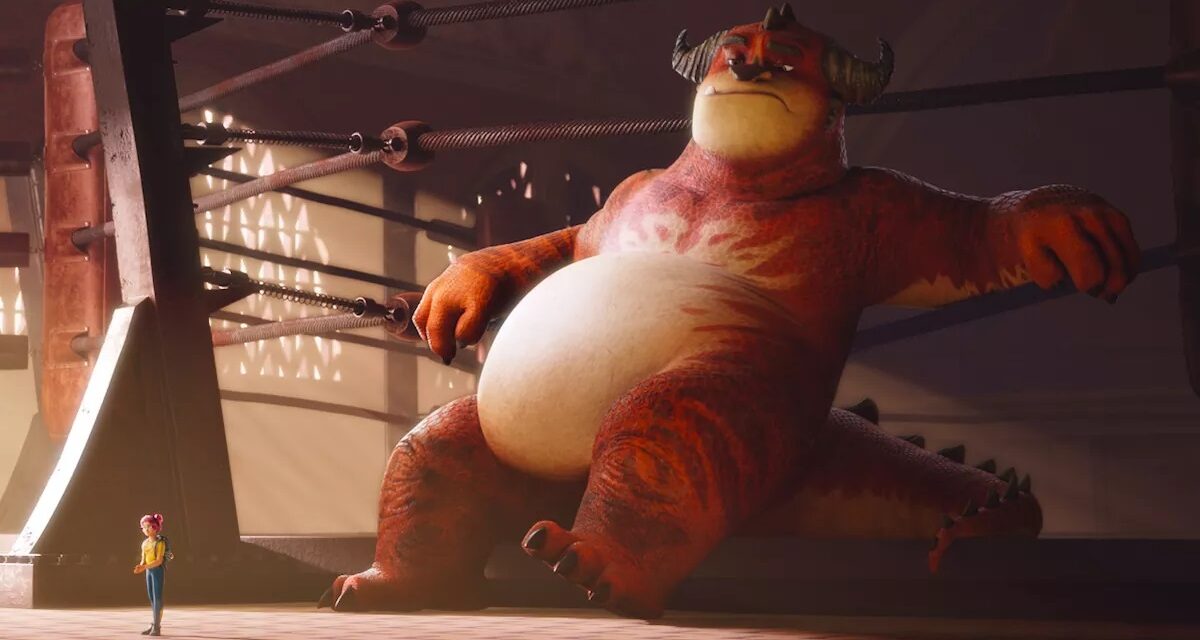 WWE’s moviemaking arm has long sought to create a crossover project featuring wrestling for movie audiences, specifically kids, to latch onto. Up to this point, it has produced mostly forgettable fare of many collaborations with existing, vintage properties such as The Flintstones and The Jetsons. There was also the time that WWE wrestlers and personalities completely took over the world of Surf’s Up in a direct-to-video sequel to the fairly popular kids’ comedy.

None of these projects ended up feeling like much more than forced product placement for a company that has always, always craved mainstream attention.

With Rumble, however, released late in 2021 and currently available to stream on Paramount+, WWE has found the right formula for capturing the attention of little kids. Based on the book Monster on the Hill by Rob Harrell, the co-production by Paramount Animation, Walden Media, and Reel FX Animation Studios ensures that the story comes first here, not the overtures by WWE wrestlers to utter their catchphrases and appear in their animated form. The two wrestlers who do lend their voices to the film, in fact, Becky Lynch and Roman Reigns, are used perfectly in the film. They voice supporting characters and their performances are invisible — which is a good thing. It means that I really wasn’t thinking of either The Man or The Tribal Chief in their scenes, I was just thinking about the characters.

Now, with all of that said, let me be clear: boasting an improvement over The Flintstones & WWE: Stone Age Smackdown, isn’t much of a boast at all. The great success of Rumble is indeed with WWE Studios nailing the alchemy of how to promote their own business within a decent movie — but it’s still no champion of a film. The animation is excellent, though, with creativity hearkening back to the world of Monsters, Inc., and the story is a better-than-average take on the underdog tale.

In the world of Rumble, cities are heavily invested in the World Monster Wrestling spectacle (surely WWE tried to have the word “Entertainment” used instead?), and the fictional town of Stoker (presumably in the USA) is one of the most famous. With monsters representing cities rather than themselves, the populace is completely wrapped up in the pride of their own warriors, all seeking “The Big Belt” as proof of their dominance. The greatest champion of all time hailed from Stoker: Rayburn, coached by Jimbo Coyle. The film does a good job introducing some pretty complicated exposition in explaining all of this. 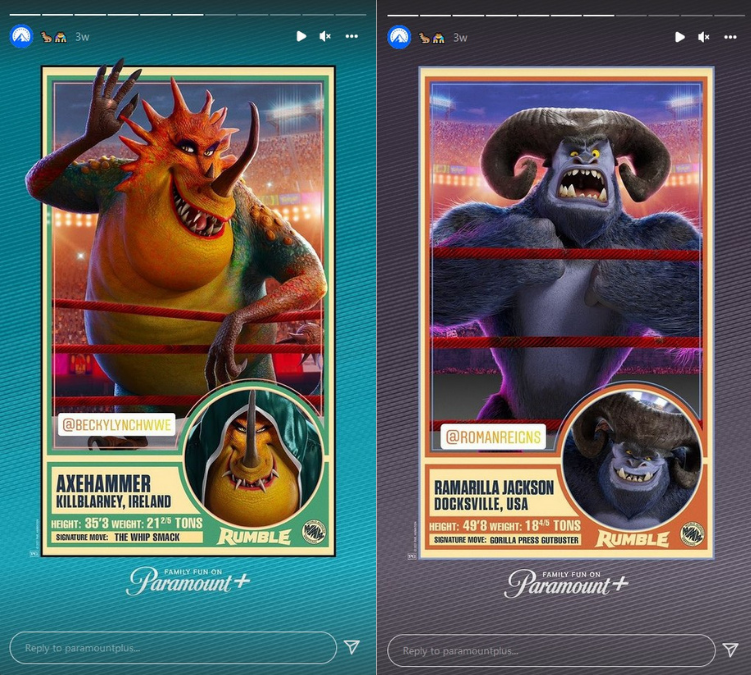 Lynch and Reigns in their monster forms. Photos from the Paramount+ Instagram page.

Years after Rayburn and Coyle are lost at sea, Coyle’s daughter Winnie (voiced by Geraldine Viswanathan) has dreams of becoming a coach herself, and it would hardly be a kids’ movie without the tragic loss of a parent, would it? Right now, though, she’s just a big fan of Stoker’s new monster Tentacular (voiced by Terry Crews) as he seeks to win the belt — which he does, and promptly turns heel on Stoker and heads off for greener pastures.

With the town in need of a champion to offset the investment in their stadium and Winnie in need of following in the footsteps of her father, all we need is a monster in need of a reason to become her champion. She finds him in an underground fight club: Rayburn, Jr., voiced by Will Arnett, who is hiding from his family legacy and going by the moniker Steve the Stupendous.

Here the film follows a predictable path for a while: Rayburn Jr. and Winnie have clashing styles, but if they can just put aside their differences, maybe they can win together. There are numerous training sequences, giving it a real Rocky IV feel, but they do put an interesting spin on Rayburn Jr.’s fighting style and secret weapon: it’s his love for dancing.

The wrestling scenes are, again, very well animated, filled with enough Irish whips, lariats, chickenwings, and reverse STOs to inspire kids to try those very moves on their siblings. Plus, Michael Buffer is on-hand to deliver his catchphrase of “Let’s get ready to rumble” — as The Simpsons‘ Troy McClure would say: “It’s the part I was born to play, baby.”

Rumble is well worth checking out, but unless your kid latches on to it and keeps pressing “Watch again”, it’s not likely to invite many repeat viewings.