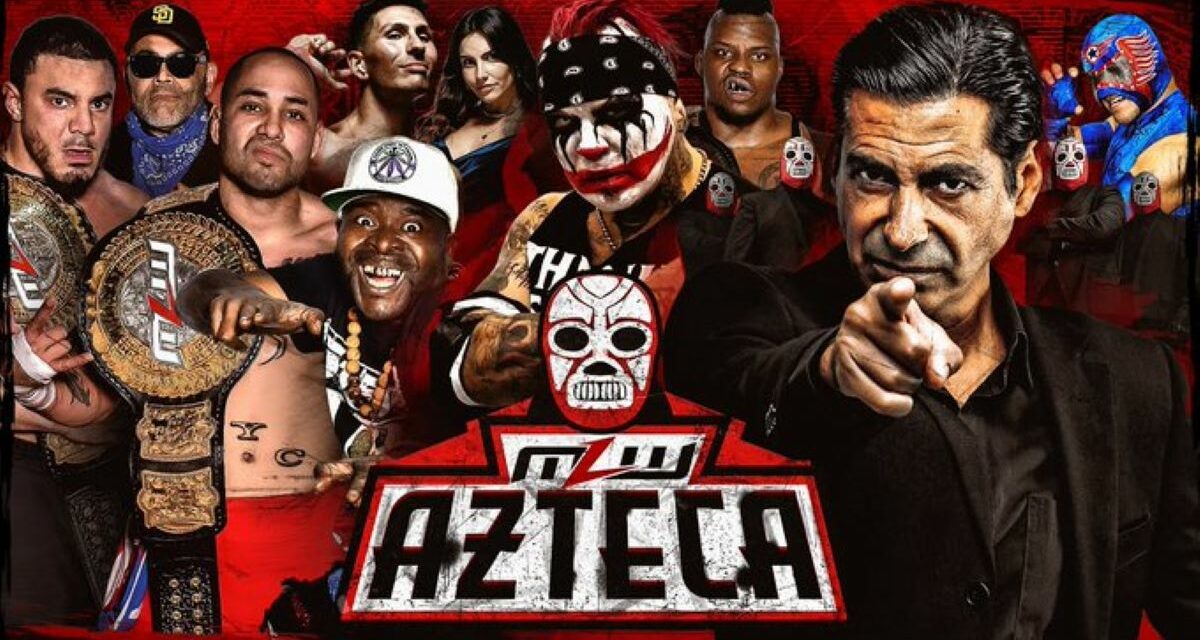 The fights never stops for Major League Wrestling, from the courtroom to the squared circle.  We’ve already covered a lot of the courtroom fun, with more to come, so let’s get to the ringside action.

We go to a cold open with Cesar Duran with his Aztec Stooges ™ addressing the Renegades as he pontificates on the joys of violence. So right now, he says, let’s Lucha!

We head to…somewhere in the underground in Tijuana, Mexico, as Rich Bocchini and John Dombrowski have the call , as we head to the ring for some tag team action for the …

This looks to be a one sided affair, as Boogie and Rivera work over Skalibur and Destiny, but the challengers bounce back with a tope suicida and a tope corkscrew, respectively.  At one point, Boogie hits an elbow drop to a cover to Destiny for a two count.

But Destiny come in with a dropkick and then Skalibur nails a powerbomb on Rivera to Boogie and both cover for a two count.  But it’s all for naught, as Rivera and Boogie go for the 456 finisher for the pin and the win.

As Konnan come out to celebrate with his prize pupils; Aerostar and Drago come out, and I am getting Lucha Underground vibes like its 2015.

We go to Alicia Atout, who’s with Savio Vega.  He’s not happy with Cesar Duran, and he wants the IWA championship back, and he will fight King Muertes for the belt under hardcore rules.  Color me intrigued how that match will take place.

Meanwhile, somewhere in Mexico…Richard Holliday wants answers from El Jefe.  Before he can confront an Azteca Stooge ™, Alicia Atout pulls him off and says it’s not worth it.

This leads to a segment on EJ Nduka, and The Judge is better than any ruling delivered by the Supreme Court.

Next week is Aerostar and Drago for the MLW tag team belts.  Tonight, though, we get a title fight for the…

From the start, the leader of the Bomaye Fight Club faces a big challenge from the Man from the Stars, but Kane hits a fall away slam to a release suplex.

This lead to Kane delivering a crossface  to a Kata Hajime (or Kane Clutch ™ ) to get the win.

In hindsight, I should’ve found a squash recipe.  But for everyone else, enjoy the fact that…

Your Winner via Submission:  Alex Kane

Emilio Sparks is outside going to El Jefe on what is going on with the MLW Heavyweight Champion, Hammerstone. Duran deflects the question like a well-tuned politician, and he receives word from an Azteca Stooge ™, saying things are proceeding, as he takes a meeting with EJ Nduka

More vignettes that Bestia 666 is coming soon.  So…yeah, there’s that.

Meanwhile, somewhere that is…not Mexico, Mads Krügger is chained in a room with Karli Perez.  He wants Jacob Fatu, and she will grant his wish in due time.  The thing I liked about the segment, it was concise and I actually understood what He was saying.  Having Perez around helped matters.

So that’s next week..

Now to Gnarls Garvin, because…yeah, I’ll pay attention when it’s worth my time.  The whiskey currently in my system says it is not. but, you can watch if you want…

But what is worth my time is the Main Event, and it is a…

From the onset, Vega in control, but Pagano has Clown Power on his side and he takes control.  The action spills to the outside, and Pagano rams Vega’s head to the bars of the auditorium.  Vega is bleeding from head, and this leads to…

We come back to Pagano with a knee drop to Vega from the top turnbuckle.  Pretty soon, thumbtacks get involved, but Vega manages to have Pagano dropped to the tacks, as he writhes in agony.

But Pagano ain’t having none of that, as he gets not only throws said tacks to Vega’s face, but gets a steel chair sent to his bleeding head, and delivers a moonsault to cover for the one, two, and three.

Your Winner via Pinfall:  Pagano

Afterwards, we learn that Jacob Fatu will break his silence next week and Bestia 666 will be with Mads Krügger at that same time. As we go back to somewhere in Mexico, Holliday finds Hammerstone and frees him from captivity, as the show fades to black.

Maybe it was the mezcal, or maybe it was something else…but this was a “meh-tacular” show at best.  Not even the tag team match or the hardcore match could rescue it.  at this point, the biggest actin MLW might face is the court case with WWE.

Yes, that was snarky, so…apologies there.  Here’s hoping next week might have more action, as we see you in seven.