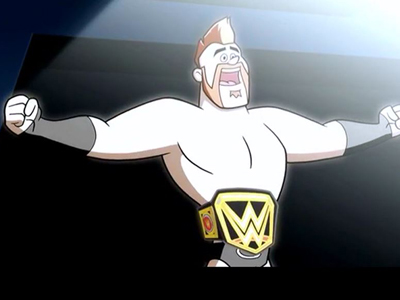 In The Flintstones & WWE: Stone Age SmackDown! the WWE superstars and everyone’s favourite Stone Age family took a page right out of history. 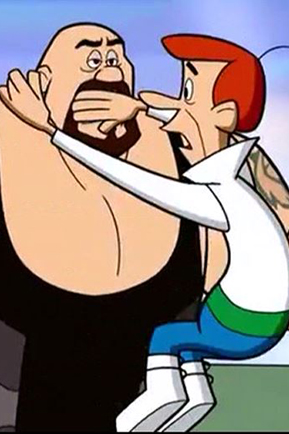 Now, the superstars are leaping into the future. In The Jetsons & WWE: Robo-WrestleMania! the superstars meet up with the space age family: George Jetson, his boy Elroy, daughter Judy and Jane, his wife.

It has been a long time since fans have visited with the madcap Jetsons. Their last feature film was Jetsons: The Movie approximately 27 years ago. A staple of the Hanna-Barbera cartoon family since their first appearance in the 1960s, it is great to see George and his family on the small screen once again and they certainly fare better in their team-up with the superstars of the WWE than the modern Stone Age family from the town of Bedrock.

The star of The Jetsons & WWE: Robo-WrestleMania! is really The Big Show himself, Paul Wight. Show does a great job voicing himself and bringing his boisterous character to life while also conveying humourous and sensitive moments as well. With the curtain perhaps coming down on his in-ring career, Show could certainly have a future voicing animated characters, the bigger and bolder the better. 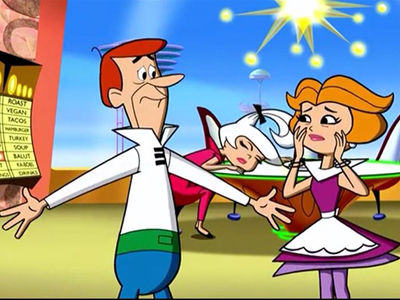 In The Jetsons & WWE: Robo-WrestleMania!, while on his way to challenging Sheamus for the WWE World Heavyweight Title, Show and his plane are frozen by a malicious blizzard. Borrowing a page from Captain America, Show is unthawed in the future by none other than George Jetson who is supervising a mining job.

Being a stranger in a strange land hasn’t dampened Show’s desire to be WWE champion. Show learns that the WWE still exists in the future but to his dismay he discovers the promoter, Vincent McMoon, a distant relative of Vince McMahon, has replaced all of human superstars with robotic versions of former WWE wrestlers like Roman Reigns, Seth Rollins, Dolph Ziggler and The Big Show himself. 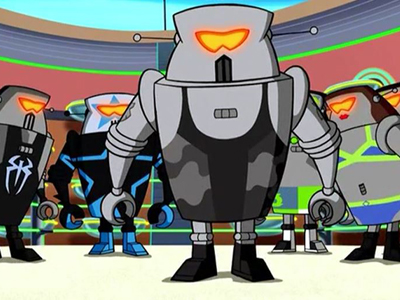 Show snaps, defeats Reactor Rollins for the title and begins a reign of terror which includes … ummmm … beating up an entire squad of police officers? That is a strange turn of events considering this is a children’s film.

Determined to set things right, George time travels back in time and recruits a team of WWE superstars to take down The Big Show and his robotic minions. Why George just doesn’t change the present timeline by traveling back and not unearthing The Big Show in the first place is anyone’s guess.

The difference between The Jetsons & WWE: Robo-WrestleMania! and the other WWE animated movies is that Jetsons features a whole continent of mid-card stars with the exception of Roman Reigns and Seth Rollins. There is no John Cena, no Undertaker, no Triple H, no Daniel Bryan and no Bella Twins. Instead, we have Alicia Fox, Sheamus, Michael Cole, Stardust, The Usos and Dolph Ziggler. These are not exactly the kind of stars that will have young WWE fans sitting up and taking notice. 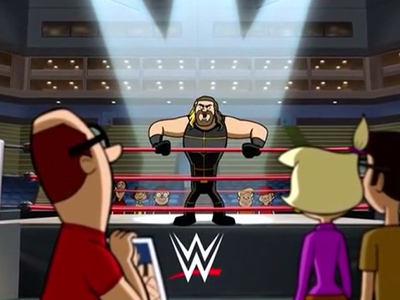 In spite of its outlandish storyline or maybe because of it, The Jetsons & WWE: Robo-WrestleMania! is the most creative and most entertaining WWE animated film next to last year’s Scooby-Doo! and WWE: Curse of the Speed Demon. It is a fantastic way to get young WWE fans pumped for WrestleMania next month.