AEW RAMPAGE: Jurassic Express takes a bite out of the Dark Order 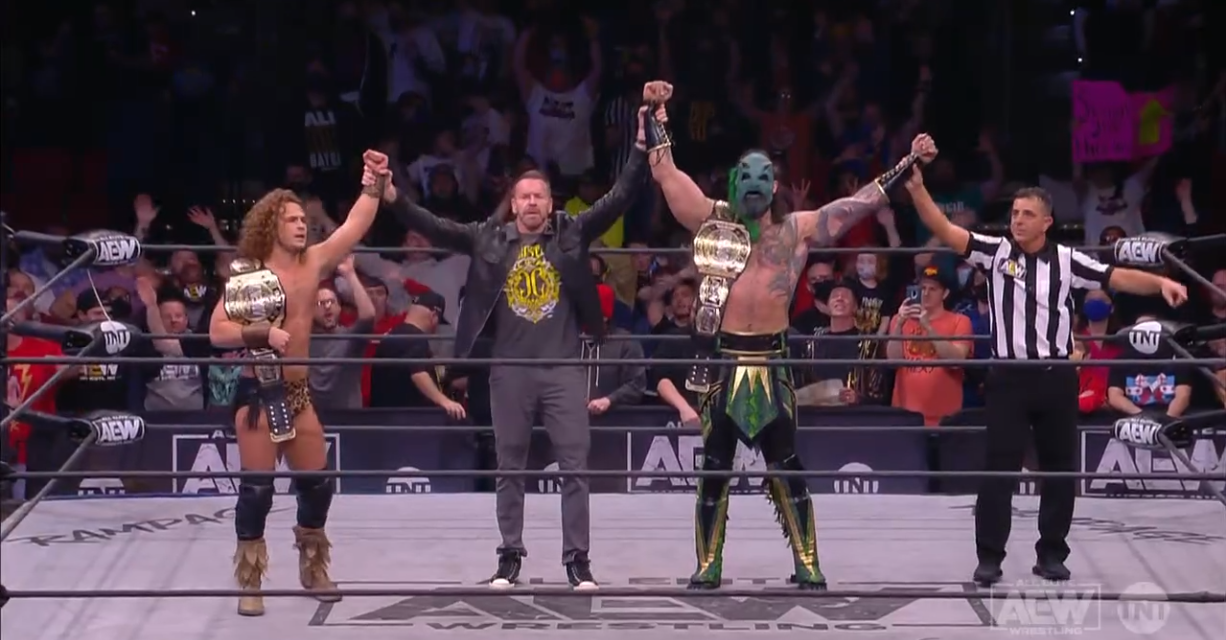 It’s Friday night and you know what that means, well maybe you don’t, but tonight it means I’m stepping in to recap Rampage. AEW doesn’t mess around getting to the action and neither will I. Onto the show.

Everyone is at ringside for this match, well it feels like everyone now that Britt Baker is coming out with her man, Adam Cole. A knee strike sends Adam Cole to the floor, where is tending to by the Young Bucks. Britt distracts Trent long enough, allowing Cole to sweep him off the apron. In the ring, Cole hits a neck breaker. After another neck breaker, Baretta kicks out of a pin at the two count. Cole looks for the Panama Sunrise on the floor, but Trent counters with a back body drop. Baretta wants a spear, but Cole dodges. Baretta crashes and burns into the security railings.

Back in the ring, Baretta mounts some offense with strikes. He hits a deadlift German suplex and follows with a tornado DDT. Cole kicks out. The two go up top and Baretta hits a brain buster from the top turnbuckle. Cole fights his way out of a fireman’s carry and hits a backstabber. Cole wants a superkick, but Trent can’t get to his feet. Cole with a brain buster. The two fight on the apron. Baretta with a pile driver on the apron, but has to roll Cole back into the ring. Cole is able to hit a Canadian destroyer but only is able to get a two count. Trent blocks another Panama Sunrise and hits a suplex. Baretta runs into a superkick. Cole wants the Panama Sunrise, but Baretta counters into Strong Zero. Cole gets a foot on the ropes to break the pin. The Elite and Best Friends brawl outside the ring. Cole hits a low blow with the ref distracted and then follows with Boom knee. He covers and gets the win.

Everett is make his AEW debut. Spears tries to toy with Everett, but when Andrew almost gets a few moves in, Spears hits him with the C4. He covers and gets the win.

After the match, Spears cuts a promo on CM Punk.

The Acclaimed dropped a diss track on Sting and Darby Allin.

Statlander starts off the match, only to have Hirsch tag herself in. Maybe she shouldn’t have and Rose tosses her around the ring. Statlander is able to tag herself in and takes down Bunny with a front head lock. Kris with a powerslam for a two count. Velvet gets the tag and Statlander slams her onto Bunny. Another quick tag in the face corner allows Hirsch and Velvet to double team Bunny. Statlander refuses a tag from Leyla and the two are not seeing eye to eye. Rose chokeslams Red Velvet, but then misses on a senton. Statlander gets the hot tag, working over Ford in the corner. A gourd buster on gets a two count on Ford. Penelope with an eye gauge, but Statlander is able to contort Ford into the spider crab. The Bunny break the hold with a blind side kick. Statlander fights back with a Blue Thunder bomb on Bunny. Hirsch with a blind tag. Statlander gets in her face, allowing Bunny to strike both of them. Bunny rolls up Leyla and gets the pin.

The Men of Year and Dan Lambert accuse Sammy Guevara of ducking them.

Ricky Starks calls out Jay Lethal while on commentary. So Lethal walks out. He is sick of the way Team Taz has been treating Dante Martin. Lethal challenges Starks for the FTW belt. Starks looks like he wants to fight, but several refs stop anything from happening.

Jungle Boy and Reynold trade holds to start the match. Luchasaurus tags in, chopping Alex to the mat. He tosses Reynolds into the corner. JB with a tag and hits a senton. Reynolds gets a near fall with a backslide and then tags in Silver. John with a suplex and Silver poses in the ring. Silver with a cannonball to Luchasaurus and then catches Jungle Boy on a suicide dive. Silver lifts JB up and Reynolds dives through the ropes to take him out.

After a commercial break, Luchasaurus gets the hot tag. He tosses Silver and Reynolds into opposite corners. Luchasaurus takes turns slamming into both of them and then takes both down with a clothesline. Reynolds saves Silver from a choke slam, but it doesn’t matter. Silver gets slammed onto is partner. Silver with a superkick to the Big Dino. Silver picks up JB, but Jungle Boy escapes and catches Reynolds up top. Silver tries to save his partner, but Luchasaurus picks up Silver. All four men are in the corner and we have a quad-superplex.

Reynold with a knee strike to Jungle Boy and Luchasaurus is knocked out of the ring. Reynolds can’t get the pin with jackknife pin after a German suplex. Jungle Boy shoots off the ropes with a clothesline and then hits Silver with a hurricanrana off the apron into Evil Uno. Jungle boy follows with a destroyer on Reynolds, but only gets a two count. Luchasaurus tags in. He kicks Silver off the apron. Luchasaurus slams Reynolds to the mat as Jungle Boy takes out Silver on the floor. Luchasaurus covers for the win.

Nothing really special about tonight’s Rampage, sometimes it really is just about the wrestling. The show loses at least half of star though for having a squash match. The show is only an hour long, people, we need to maximize every minute.