He was a tooth fairy, Hercules, a G.I. Joe and a secret agent. Now, you can add psychic to the accomplishments of one Dwayne Johnson. How else would he have been able to predict that his long-running gag with John Cena during their Once in a Lifetime feud would actually become reality. That the WWE would tag team with one of the most iconic animated series in television history? 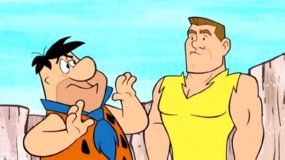 Much like The Simpsons today, at its time The Flintstones was a primetime animated series produced with adults in mind as a parody of The Honeymooners. When the characters became popular with children and adults alike, the appeal of the series quickly became mainstream. The producers lampooned pop culture, celebrities and even other television shows. So, it is not really all that surprising to see them send-up the WWE and its over-the-top characters. 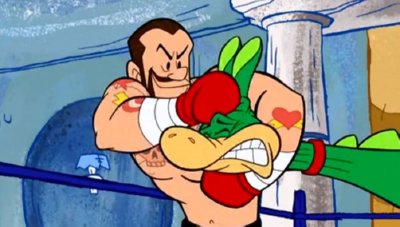 Like The New Rockers though, the pairing between The Flintstones and the WWE is awkward. The Flintstones & WWE: Stone Age Smackdown is predictable, corny and some of the more uncomfortable moments are guaranteed to raise the eyebrows of some viewers, and not in a good way like when The Rock does it.

Like so many of The Flintstones episodes, Stone Age Smackdown has Fred hatching a shady scheme to save his own bacon. Screwing up so badly at work that he might have to cancel his family’s vacation, Fred bumbles and stumbles into becoming the world’s first sports entertainment promoter to make a few quick clams. Hiring new co-worker John Cenastone and his friends, The Undertaker and Rey Mysteriopal, Fred creates his own federation. He is soon sucked into all the glitz and glamour of the business and turns his back on his friends and family. 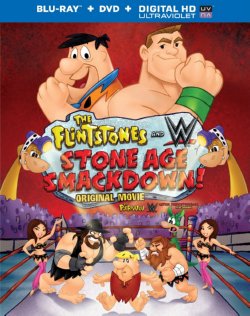 Intertwined into the larger story is a feud between a poorly voiced Barney Rubble and the nasty squared circle bully CM Punkrock and his witless lackey Marble Henry. Kevin Michael Richardson supplies the voice of Barney and on the whole, Richardson is one of the most talented voice actors around giving life to so many characters in his 21-year career including work on The Simpsons, Family Guy, Juggernaut in Ultimate Spider-Man, Kilowog in Green Lantern and perhaps most famously The Joker in The Batman series in 2004. Somehow, things just don’t work here. His tone is too mousey, shrill, and not really reminiscent of the Barney Rubble we all know and love.

Barney and CM Punkrock get into a dust-up when Punkrock maliciously torments Barney’s pet boxing Hopparoo, Hoppy at a charity event. Barney tries to talk things out with CM Punkrock but only a splash from the top rope gets through to him giving Fred the idea to organize wrestling bouts for real cash. With the WWE’s highly-publicized and admirable anti-bullying campaign fresh in our thoughts, the whole scenario plays out in unamusing, uneasy way. CM Punkrock comes off not as a laughable, blundering cartoon villain but a really mean piece of work, especially with how he treats poor Hoppy. We get the same feeling near the end of the film when Wilma and Betty roll up their sleeves to knock some sense into the Bella Twins without any discussion whatsoever and Fred punches Barney in the head when he spills the beans to Wilma. 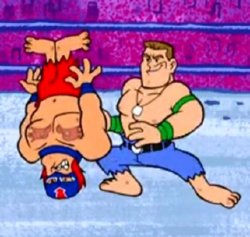 Tone is handled so poorly throughout the film. In one scene that boggles the mind, Fred mentions to Barney that Wilma modeled her new bikini for him the other night. In response, Barney gleefully rubs his hands and says: “I would’ve liked to have seen her in THAT bikini!” Talk about creepy. The comment is just so out of character, so peculiar coming from Barney, you have to wonder what message the producers are trying to send. Has Barney had a secret crush on his best friend’s wife all these years? Has he been checking out Wilma behind Fred’s back the entire time?