Cross tailor-made for Son of Havoc role in Lucha Underground

TORONTO — It’s fascinating watching Matt Cross light up in excitement when talking about his role as Son of Havoc in Lucha Underground on the ElRey Network, He’s almost as giddy as a schoolgirl describing the opportunity he’s been given — which is no mean feat when you consider the long, ragged red beard he sports.

Setting aside the M-Dogg persona that has served him well, Cross has embraced the new character, who is in a battle to keep up with the in-ring track record of girlfriend Ivelisse. 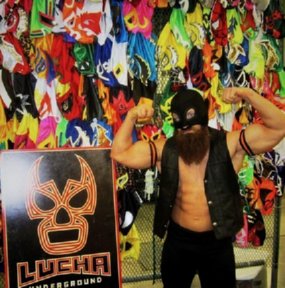 “Son of Havoc is a bad ass. He’s just a no-nonsense guy who’s out there bringing the chaos and destruction,” he said. “I’m a powerhouse, I’m a high-flyer, I’m innovative. I don’t care if you’ve been watching wrestling for five years, 10 years, or 20 years, I want to do something that you have never seen before. I aim to please, I am to be different. My style, my unique moves lend themselves to the tempo, to the different environment.”

Cross was thrilled to get the call.

“I’m tailor-made for a project like that, a next-level style of wrestling — I think that’s what they’re bringing to the table. It’s the evolution of wrestling. I’ve always prided myself as a next-level wrestler,” Cross said at intermission of a recent Smash Wrestling show in Toronto’s west end, where he worked under his long-standing gimmick. “Who wouldn’t be excited for what they’re doing? They’re bringing together these hungry, young guys who are aware of the opportunity that they’ve been given, on TV every week. Everybody’s killing it.”

He considered the different atmosphere at the Lucha Underground “temple.”

“It’s the evolution of the product. I think all entertainment evolves, and for one reason or another, I think wrestling has been more stagnant than other forms of entertainment. My parents growing up, or me growing up, watching the Brady Bunch, whereas the new generation is watching Breaking Bad. It’s not just different content, it’s shot differently, using different angles. TV nowadays expects more of the audience and they realize that the audience is smarter. I think that wrestling is insulting to audiences often, and I think Lucha Underground is not. They’re expecting more out of the audience. They’re evolving like all other forms of entertainment are.”

For the role of Son of Havoc, Cross had to evolve too, including wearing a mask.

“It changes things a lot. Your sight is thrown off, breathing is thrown off. The temperature is raised a couple hundred-thousand degrees,” Cross described. “It’s very difficult. I’m a guy who never even wore tights before, or really boots for that matter. I’m now a guy wearing boots, long tights, a mask, so I’ve been thrown quite a few curveballs, but it helps me get into a different mindset. I think we’re literally changing the business, so it helps me get in that mindset of ready for action.”

Another challenge is keeping up with what part of the storyline has aired at which point; he stumbled during the interview with the knowledge that a future title change from a pre-taped episode of Lucha Underground has already been revealed online. “We’re very ahead. We’ll see where it goes,” was all he would.

The hope is, of course, that Lucha Underground lasts far longer than Wrestling Society X did — 10 episodes in early 2007.

Regardless of how it all turns out, Cross is thrilled to be along for the ride.

“It’s a guy with 14 years experience who’s been all over the world and is very excited for this opportunity he’s been given to appear on TV each and every week, and be a part of the change that he wanted to see for so many years,” he concluded.

Greg Oliver is enough of a comic book geek that he gets confused by the Son of Havoc name; Havoc and Cyclops are the sons of Corsair. When his mind isn’t muddled by comic books, Greg is the Producer of SLAM! Wrestling. He can be emailed at [email protected], and you can follow him on Twitter @gregmep.